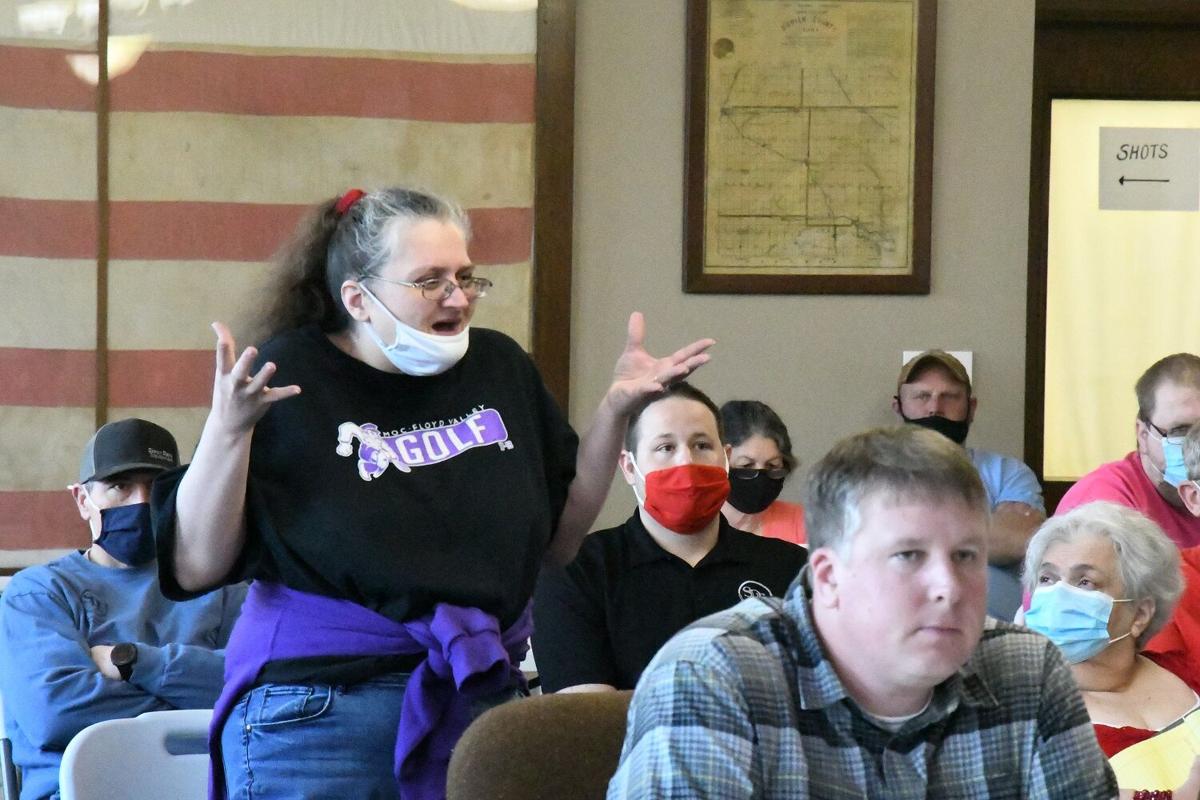 Lezlie Pearson of Orange City objects to the construction of an additional confinement at Roorda Dairy near Paullina during Tuesday’s board of supervisors meeting. Pearson said her mother lives near the dairy and the odor makes it hard for her to be outside. 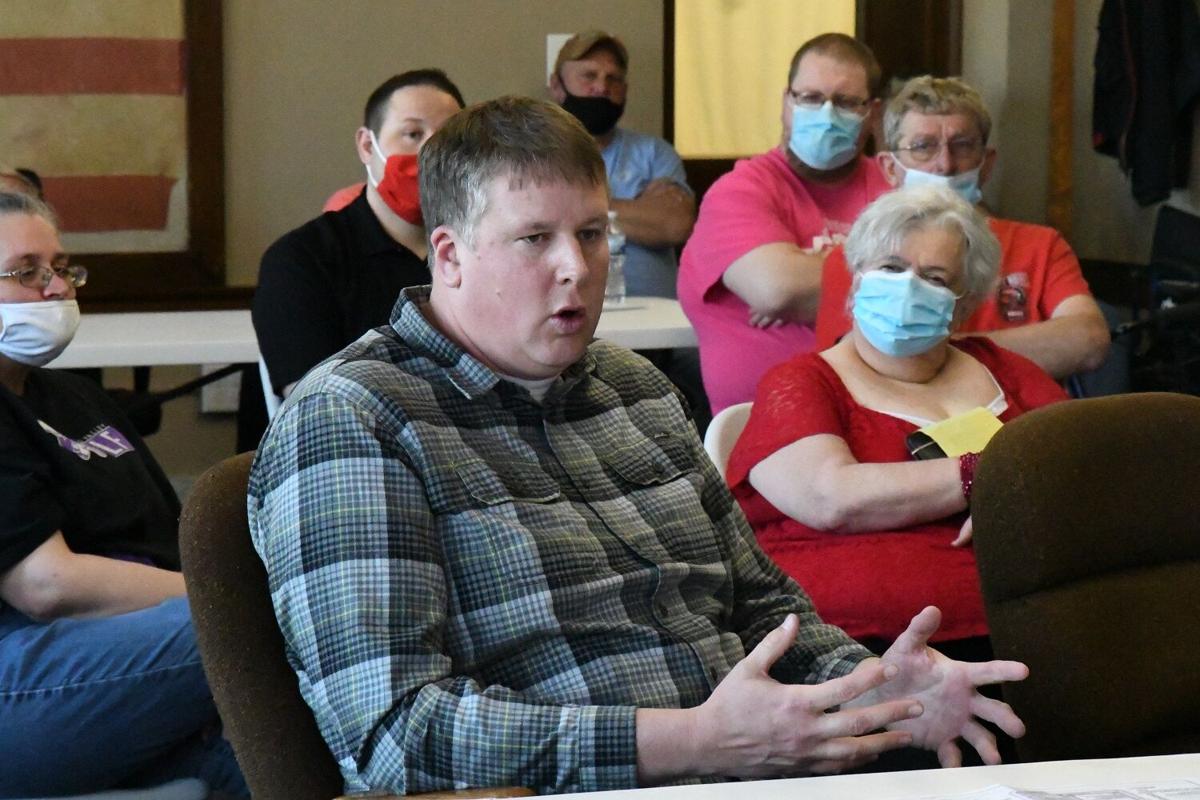 Nic Rowe, an engineer with Jackson, MN-based ProAg Engineering who is helping Roorda Dairy with a planned construction project, talks to the board of supervisors about concerns raised about the facility.

PRIMGHAR—Russell Rohlfsen is one of several O’Brien County residents who does not want another confinement facility to be erected at Roorda Dairy near Paullina.

Rohlfsen argued against the dairy’s expansion during a construction permit application hearing at the board of supervisors meeting Tuesday, April 6.

The main problem he and others raised: The smell.

“If we build another dairy and it stinks like that, it’s going to ruin our neighborhood,” said Rohlfsen, who lives near where the facility would be built in Section 24 of Baker Township.

“We’ve got young people living to the north of us, to the south of us and it’s going to be terrible. The odor is terrible.”

The facility would include a 5,791-head free-stall confinement building, sand lane, milking parlor, holding area building and a three-cell earthen manure storage basin. It would be located to the north of the existing dairy, which is situated on Highway 10 about five miles west of Paullina.

Other residents said the smell would drive down property values and deter people from moving to or staying in the area. Anna Hofmeyer said she and her family live about a half-mile across from where the new facility would be and are in the process of renovating their house.

“I don’t want to look at that and know it’s just a half mile from where we live, in our front yard,” she said.

Rohlfsen said Roorda Dairy should fix the smell coming from its existing facilities before expanding. He also asked the supervisors whether or not they’d want to live next to a facility such as Roorda Dairy.

Lezlie and Andrew Pearson and their mother, Sandra Richter Pearson, also spoke against the proposed confinement on account of the smell.

Sandra lives with Andrew on her family farm west of Rohlfsen, which she took over after her father and brother died. Lezlie lives in Orange City but visits the farm on the weekends.

Sandra enjoys being able to walk outside for exercise and take in the sunshine, however, she spoke of problems with her heart and lungs that make breathing the manure odor hard on her.

“If this goes forward, I honestly don’t know what to do. I will probably have to move, and I don’t want to do that,” she said.

Andrew also mentioned how the family likes to have outdoor family gatherings at the farm, but a 12-year-old nephew of his has strong allergic reactions to pollen and other airborne particles. Andrew worried additional manure odor could exacerbate such reactions.

The owner of the dairy, Scott Roorda, responded to the criticism of the smell saying the dairy has been working to reduce it. He said the supervisors approved a waiver in early February for the dairy to construct a manure digester.

“It’s a big, big project, but we’re hoping it does help with a lot of the smell,” Roorda said.

He said his father also has health problems — having underwent a quadruple bypass heart operation — but is still able to work at the dairy every day. Roorda has been at the dairy since 2008 and said in that time, he has not heard a complaint about the smell.

Nic Rowe, an engineer with Jackson, MN-based ProAg Engineering who is helping the dairy with the construction project, answered another question raised about drainage tiles near the site and how the expansion would affect them.

“We’ve got the tile maps. We know where they’re at,” Rowe said. “They will be removed from underneath any of the manure storage structures and diverted around the dairy site.”

He also said trees have been planted around the project location, which will help reduce odors, and that runoff the facility creates will be contained to the site.

The supervisors met with the DNR at the dairy Monday as part of the evaluation process. Bootsma said even if the board was to vote against a confinement application, the applicant could appeal to the DNR’s Environmental Protection Commission that has final say.

McDowell also responded to a complaint that the residents who live near the dairy were not informed the hearing was taking place. The Pearsons said they learned of the meeting from Rohlfsen.

McDowell said the formal notice was given in the county’s official publication — The REVIEW — which is the legal process the Legislature sets out for counties to inform the public about such hearings. She said the DNR likewise follows laws established by the state government when it comes to signing off on confinement applications.

Friedrichsen and Bootsma reiterated how the dairy scored well on the matrix and the DNR told them the site meets its requirements to move forward with the confinement. The board voted to approve the construction permit application.

PRIMGHAR—The O’Brien County Board of Supervisors gave its blessing Tuesday, Feb. 2, for Roorda Dairy west of Paullina to build a manure digest…