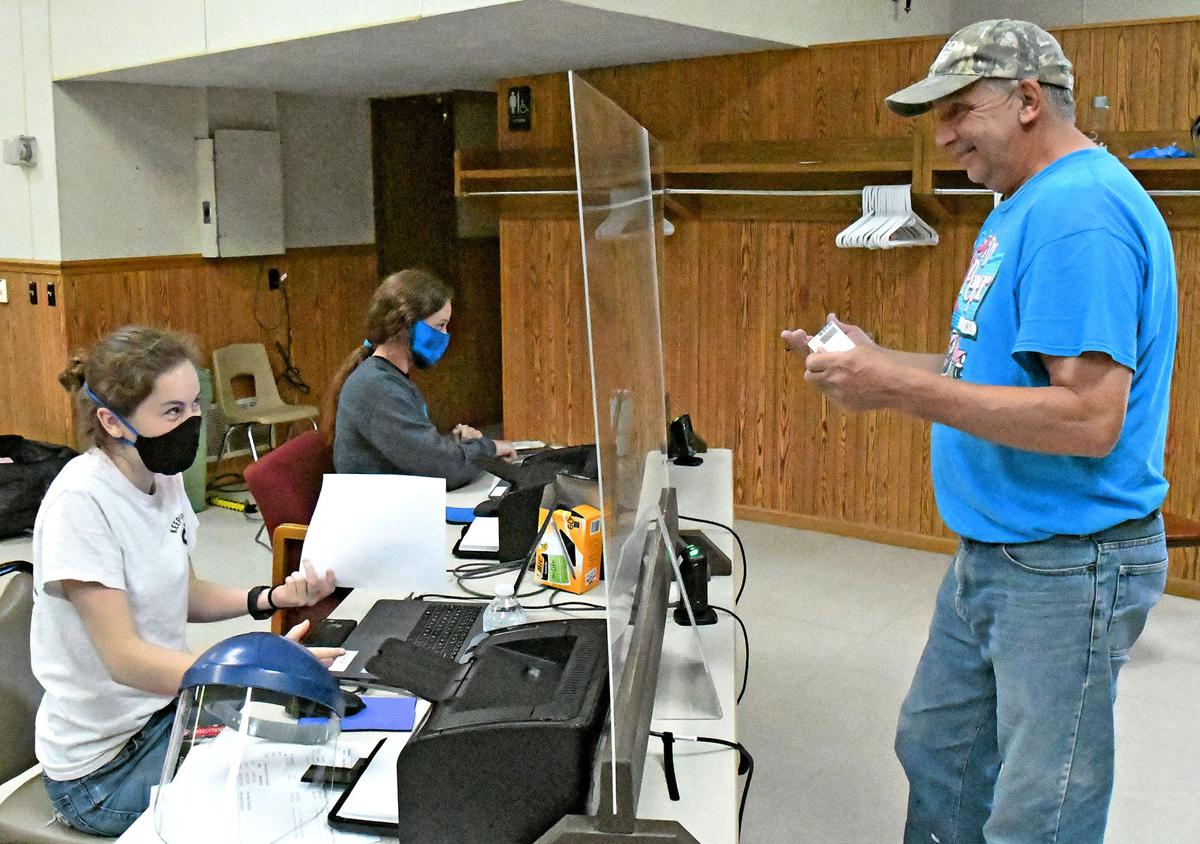 Precinct official Emily Chicoine checks in Rich Richter of Primghar during the primary election Tuesday, June 2, at the Primghar Community Building. Chicoine and other precinct officials wore masks due to the coronavirus pandemic. 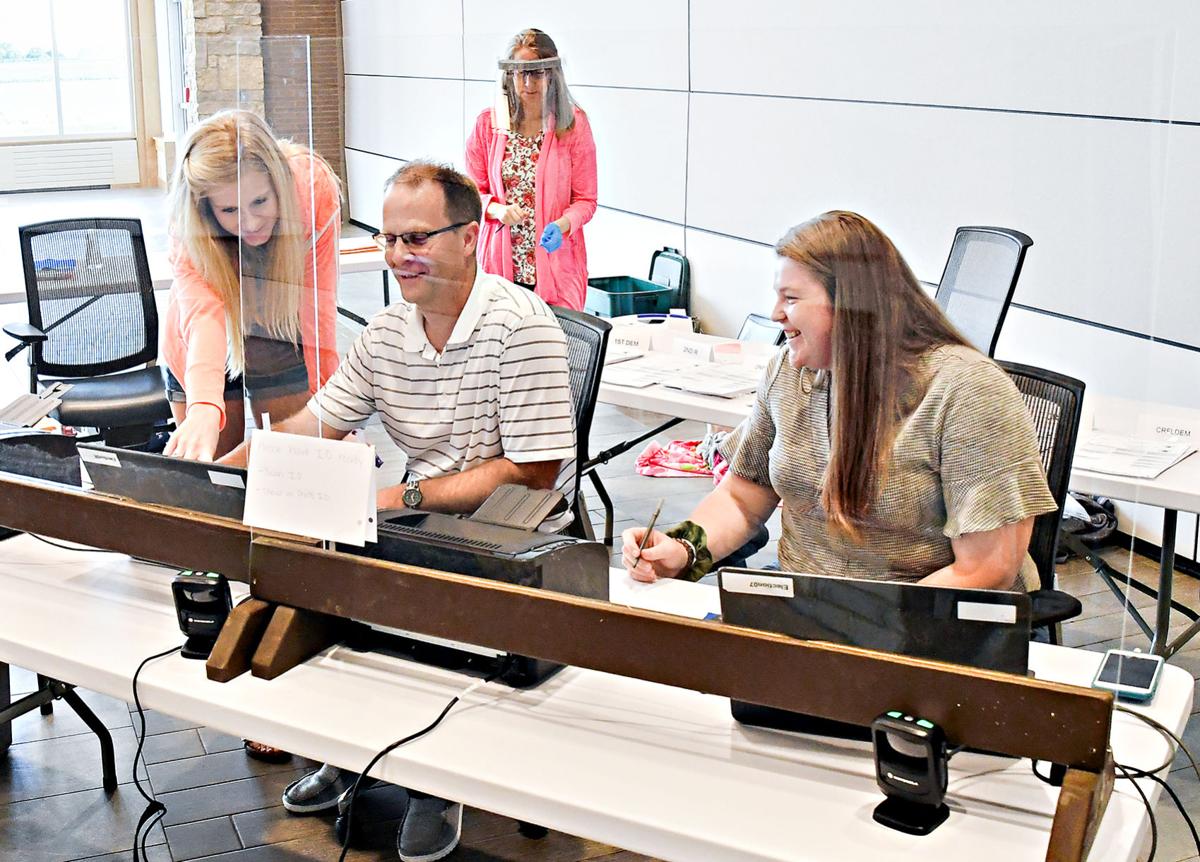 Precinct official Emily Chicoine checks in Rich Richter of Primghar during the primary election Tuesday, June 2, at the Primghar Community Building. Chicoine and other precinct officials wore masks due to the coronavirus pandemic.

REGIONAL—O’Brien County voters have chosen their next sheriff.

With incumbent sheriff Allen Schuknecht (R-Prim­ghar) not running again for his seat, two candidates emerged to vie for the position’s Republican nomination during the June 2 primary election:

According to official election results approved Tuesday, June 9, by the board of supervisors, Devereaux earned 2,204 votes (90 percent) to defeat Collier, who received 245 votes (10 percent). There were 13 write-in votes.

When asked for his reaction to the results, Devereaux said, “It’s what I expected. I’m pleased with the citizens’ choice, of course. I’m glad the citizens saw the difference between experience and no experience. They want a strong sheriff’s office to continue.”

“When an individual has no experience, it would definitely be a challenge, a huge challenge — in fact, in my opinion — impossible to run an office like ours,” Devereaux said. “The people saw through that.”

Collier noted the majority of voters went for who they felt was more experienced and she congratulated Devereaux on his win.

“They chose who they wanted and I’m OK with it,” she said. “At the end of the day, it came down to who they knew more. I’m not new to the area, but I’m new in the community, so people don’t know me and what I can and will continue to do for the community.

“I will continue to do what I do in the community regardless of me being sheriff or not and continue on trying to get the things that I stated in my campaign changed because I don’t need to be a sheriff to get those things changed,” she said.

The 59-year-old Devereaux has worked for the sheriff’s office under Schuknecht and Michael Anderson before him and is planning to run again for sheriff after his first four-year term is up.

He has no Democratic challenger in the November general election.

“They’re definitely some big shoes to fill, but I’ve been working with them for 30 years and I’m sure there are going to be challenges ahead, like with any job, but between myself and the good people that we have working for us, we’ll get through those challenges,” Devereaux said.

“I’m looking forward to seeing where it all goes,” he said. “When you work 30 years and it finally comes to this peak and you finally are sheriff, it’s going to be interesting to see if it’s what I’ve always thought it was or if it’s going to be something different.”

The other O’Brien County races featured all of the incumbents running unopposed:

Out of 9,709 registered voters, 3,020 total ballots were cast for a 31.1 percent turnout for the primary election.

The auditor’s office had processed 2,243 absentee ballots as of Monday, June 8, while 777 ballots were cast in person at the polls.

As far as the in-person turnout, Rohwer noted her first reaction was that it was higher than she expected at the two in-person polling places.

“But then if you look at the total votes, 407 in Primghar — five precincts — and 370 in Sheldon — four precincts — it really was about what I would have expected for Election Day turnout,” she said.

The county had safety recommendations in place at its in-person polling locations due to the coronavirus pandemic.

“We asked that voters wear masks and did provide them at the doors,” Rohwer said. “We also gave them an ink pen and instructed them that it was theirs to use throughout the process and to take it with them.

“Not everyone used a mask — from what I observed at the Primghar precinct when I happened to be there,” she said. “My officials did their best to keep the social distancing.”

O’Brien County voters also had federal and state candidates to choose from during the June 2 primary election.

The other Republican candidates who ran for the position were Steve Reeder of Arnolds Park, Bret Richards of Irwin and Jeremy Taylor of Sioux City.

Democratic candidate J.D. Scholten of Sioux City, who came up just slightly more than 3 percentage points of upsetting King in the 2018 general election, also has entered the 2020 race.

King has held the congressional position since 2003, but Feenstra and Scholten will face off in the November general election for the seat.

The seat of incumbent U.S. Sen. Joni Ernst (R-Iowa) of Des Moines also was up for election. She ran again for the position.

Four Democratic challengers competed for the right to face Ernst:

Voters in the Democratic primary also found Cal Woods of Des Moines listed on the ballot for the Senate seat, but he dropped out of the race in early May and endorsed Franken.

Ernst and Greenfield will face off in the November general election for the Senate seat.

At the state level, the District 3 seat in the House of Representatives was up for election this year.

Republicans Dennis Bush of Cleghorn, Lynn Evans of Aurelia and Mark McHugh of Sheldon filed for the position.

Feenstra is the Iowa Senate District 2 longtime incumbent; however, he vacated the position to run for King’s seat in the U.S. House of Representatives.

Republican candidate Jeff Taylor of Sioux Center was the only person to file for the Senate seat.

REGIONAL—Lyon and O’Brien counties featured contested races for their top law enforcement positions during the primary election on Tuesday, June 2.