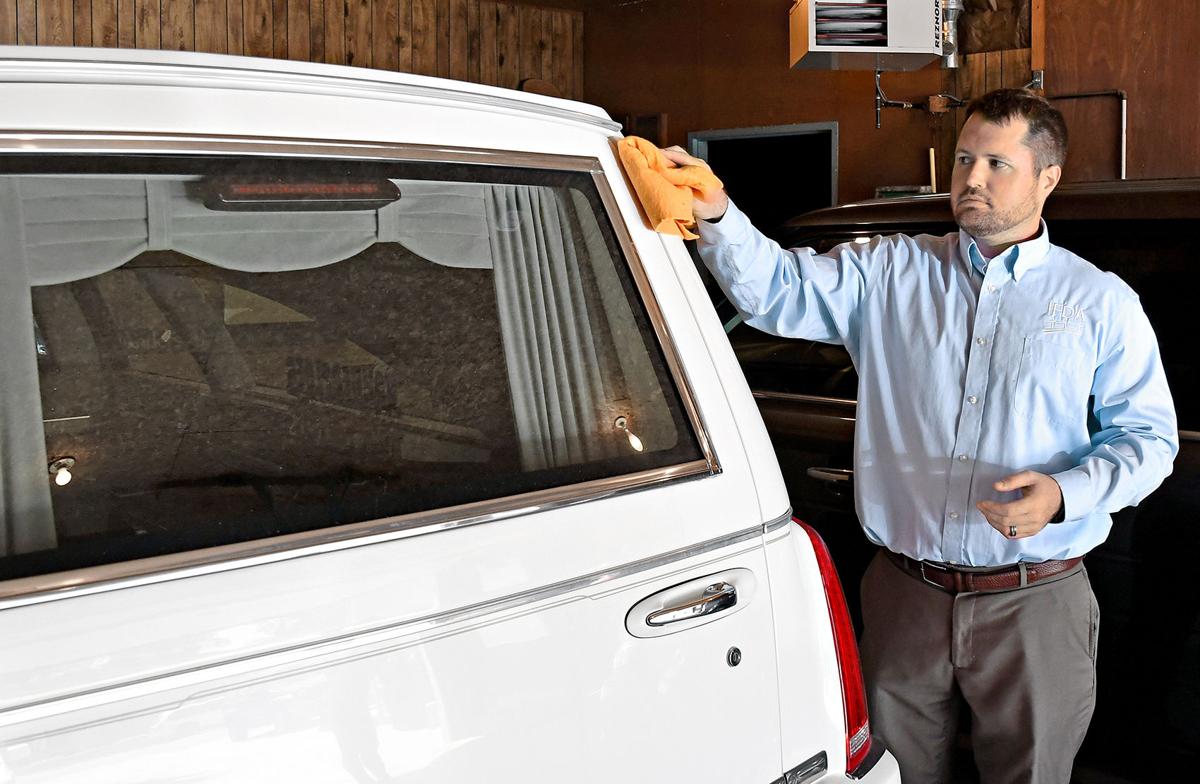 Ben Eldridge, one of the owners of Eldridge Family & Vander Ploeg Funeral Homes, wipes down the back part of a hearse. The longtime area business recently received the 2020 Iowa Award of Funeral Service Excellence. 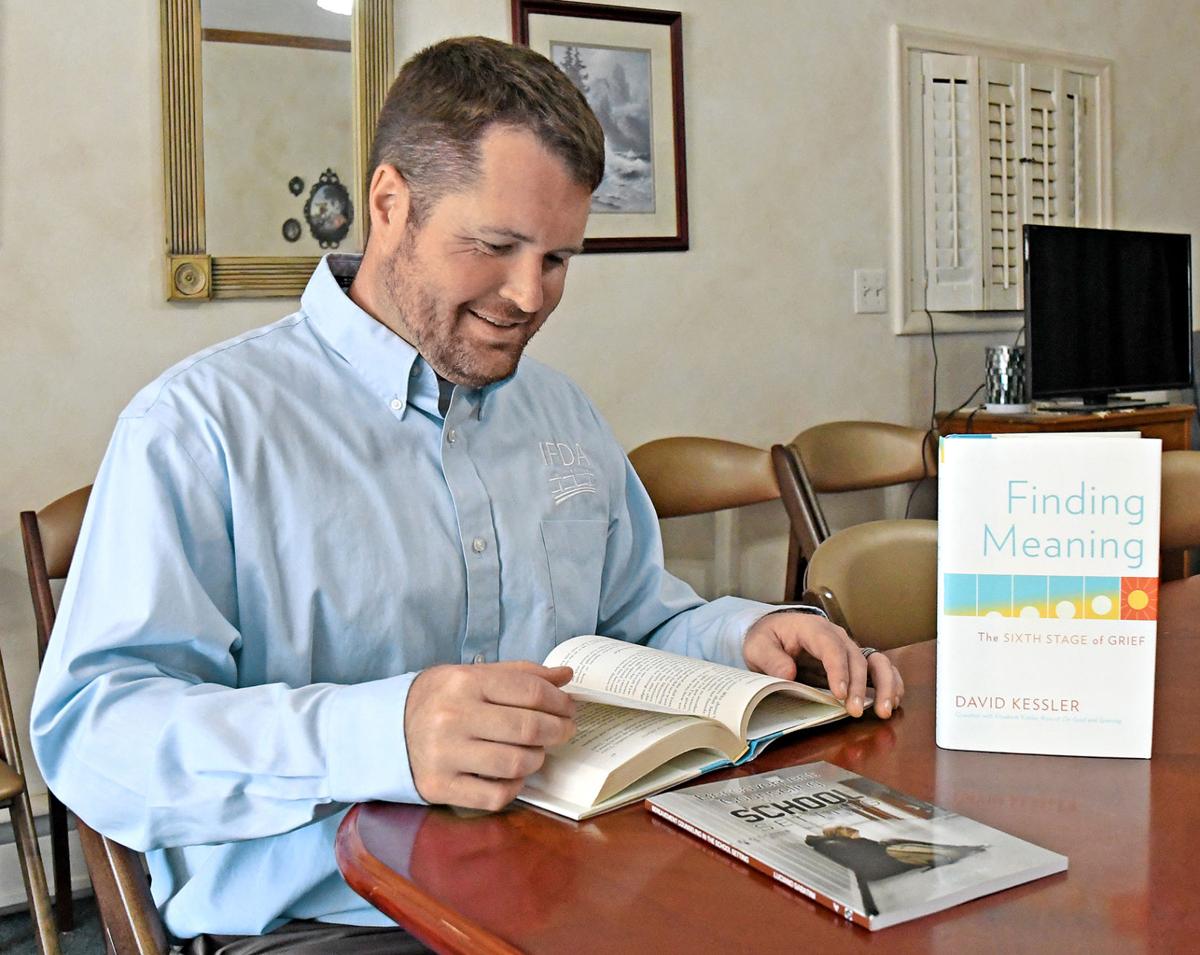 Ben Eldridge, one of the owners of Eldridge Family & Vander Ploeg Funeral Homes, looks over books about grief. The business, which has locations in Paullina and Primghar, recently received the 2020 Iowa Award of Funeral Service Excellence.

Ben Eldridge, one of the owners of Eldridge Family & Vander Ploeg Funeral Homes, wipes down the back part of a hearse. The longtime area business recently received the 2020 Iowa Award of Funeral Service Excellence.

Ben Eldridge, one of the owners of Eldridge Family & Vander Ploeg Funeral Homes, looks over books about grief. The business, which has locations in Paullina and Primghar, recently received the 2020 Iowa Award of Funeral Service Excellence.

“It’s just nice to be recognized by the state association,” said Ben Eldridge of Paullina, one of the owners of the business. “It’s nice to be able to show the community that we put forth the best effort we can to provide services year after year.”

The award recognizes a funeral home’s exemplary service to the community or communities it serves.

“Year after year, we always meet the requirements that the award has,” Eldridge said. “Basically, it was putting everything together and making a book and applying for it.”

The business was one of 13 funeral homes from throughout the state to receive the award.

This also is the first year the company has been recognized by its peers for this achievement.

To qualify, a funeral home must excel in four of the five following areas:

Eldridge Family & Vander Ploeg Funeral Homes had never applied to receive the honor before, but easily qualified for the award.

“We’ve been doing everything,” Eldridge said. “It’s another accolade to show the families that we serve what we provide to the community.”

He noted the business holds an annual Christmas program at Vander Ploeg Funeral Home in Sheldon for families it has served during the past year.

“That’s one of the things we’ve been doing for quite a few years,” Eldridge said. “It’s for the families that we’ve served. It’s for families that maybe we haven’t served, but are still grieving and want to attend something over the holidays.

“We send out cards for families that we’ve served — a holiday card just to let them know that we’re still thinking about them throughout the year,” he said. “That’s another program we do.”

In addition, the company sends out thank-you cards as well as surveys to the families it has served to see what it could have done better.

The business also promotes bereavement programs that organizations like the Elderbridge Agency on Aging put on, such as ones that instruct retirees to plan ahead.

The company participates in a program through the Iowa Funeral Directors Association in which it donates books on grief to area libraries.

“Talking to some libraries, they don’t have a lot on grief,” Eldridge said.

The 34-year-old recently became the president-elect of the state funeral directors association after serving as its secretary-treasurer for the past year.

His new duties include overseeing the organization’s education committee and representing Iowa on the National Funeral Directors Association’s Policy Board.

“It’s been good,” he said. “We’re just getting acclimated to the building. We’ve had a lot of positive comments.”

He noted there have been funeral services held at Andringa Funeral Home in Sheldon since his family took over the location.

“The demand hasn’t really been there, but I’ve been spending more time in Sheldon just doing odds and ends,” Eldridge said.

Eldridge is one of three licensed funeral directors for Eldridge Family & Vander Ploeg Funeral Homes, along with his father, Peter Eldridge of Primghar, and Matt Ascherl of Sheldon.

They and their son, Ben, and his wife, Sara, own five funeral home locations in four N’West Iowa cities, including the recently acquired Andringa Funeral Home in Sheldon.

As for the Iowa Award of Funeral Service Excellence, Eldridge Family & Vander Ploeg Funeral Homes plans on applying for the honor again in the future.

“You’ve already put in the work, so you might as well be recognized,” Ben Eldridge said. “We get to see everyone else’s books at the convention, so it’s a nice way to see what other funeral homes in the state are doing for different things.”

This story originally was published in the June 20, 2020, edition of The South O'Brien Sun.

The Iowa Funeral Directors Association has established the Iowa Award of Funeral Service Excellence as a method of promoting the funeral service profession and a means of establishing a relationship with communities and the people within them whom funeral directors serve.

Documented efforts typically are displayed at the association’s annual convention and are tangible proof funeral directors and funeral home staff are masters at developing innovative programs to reach their communities and the people they serve.

The period of participation is on an annual basis Jan. 1-Dec. 31. Certification is on a yearly basis with awards presented at the association’s annual convention.