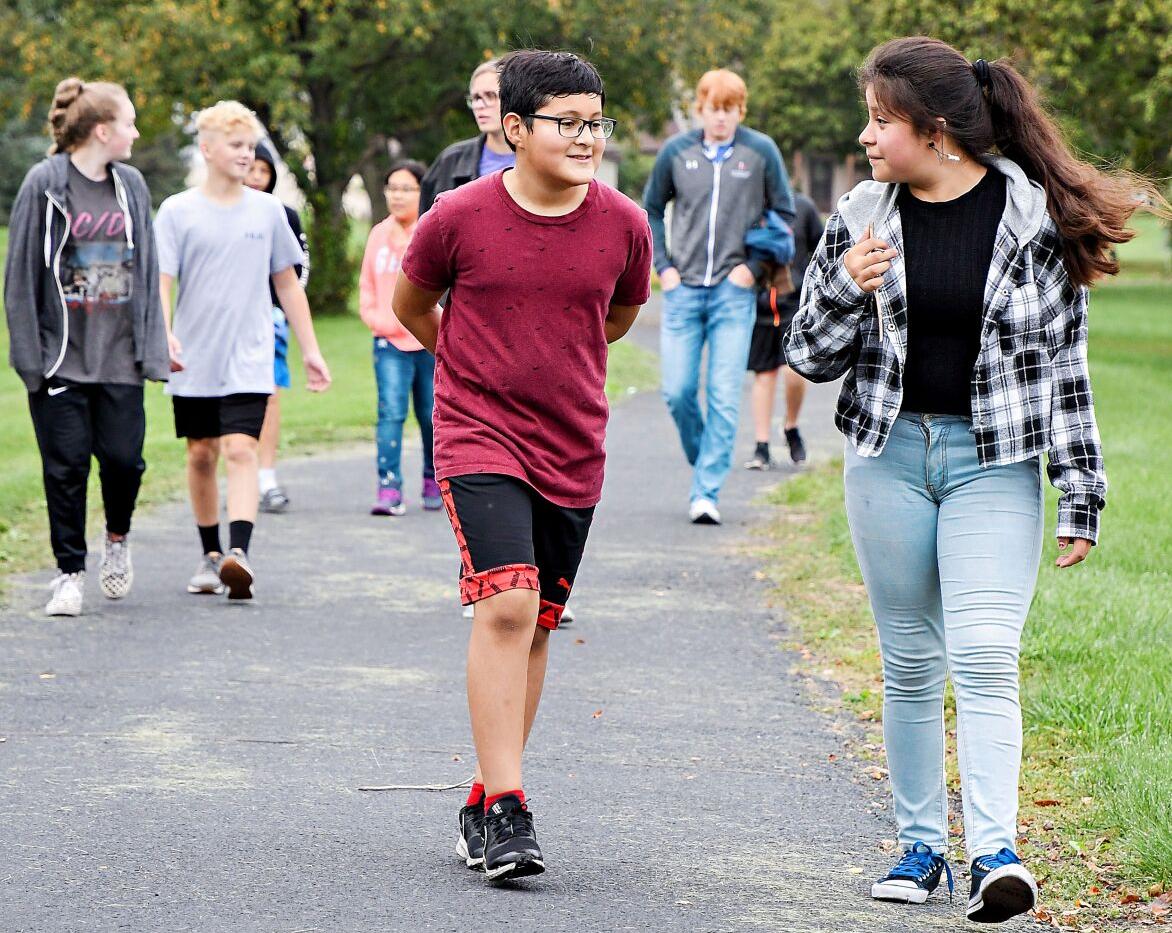 Boyden-Hull sixth-graders Jared Hernandez and Britany Castelan converse during their class stroll in on Oct. 6 in Boyden. The district’s elementary participated in the wellness walks organized throughout Iowa that day by the Healthiest State Initiative. 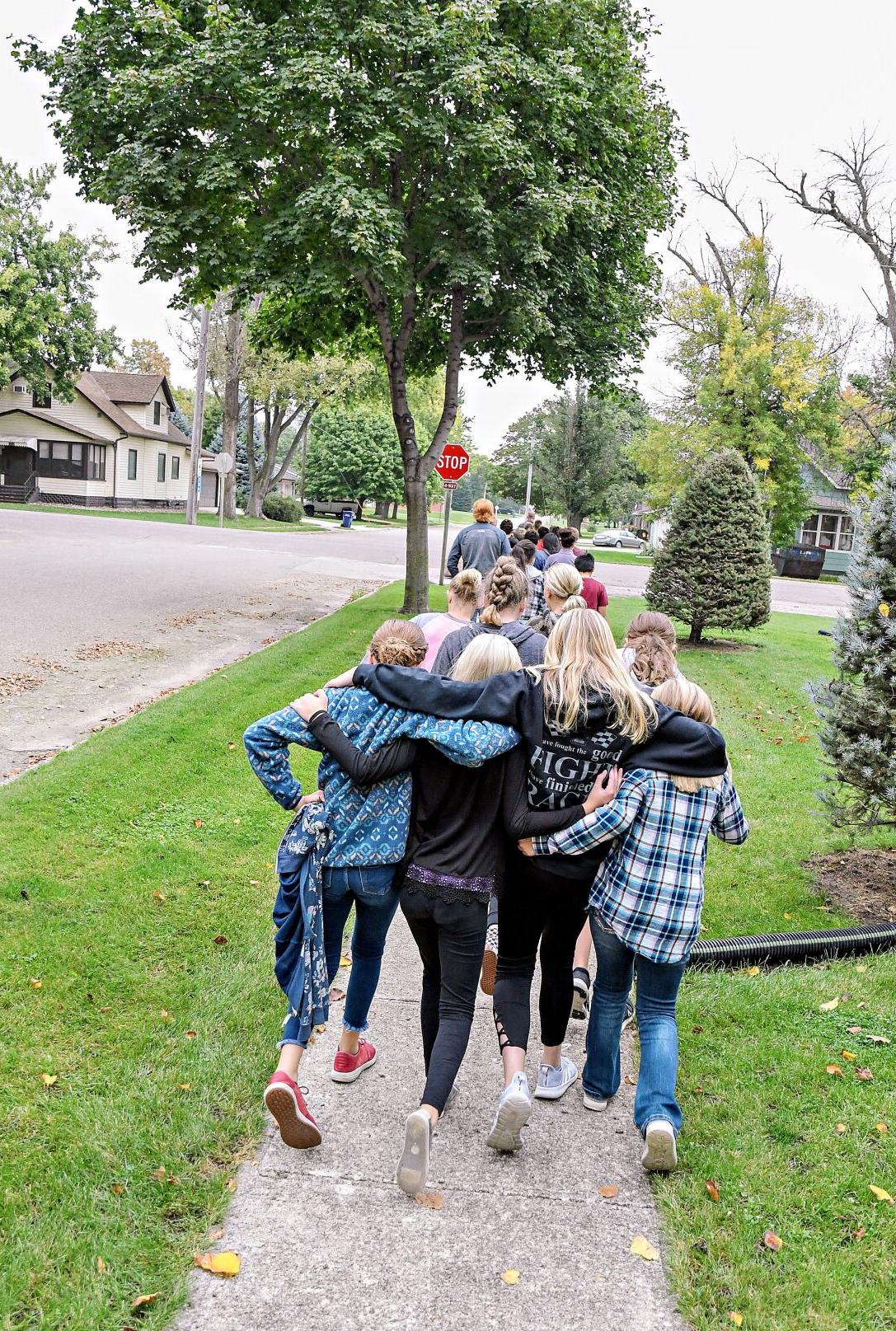 Sixth-grade girls march arm in arm along Webb Street during the Boyden-Hull Elementary Walk on Oct. 6 in Boyden. 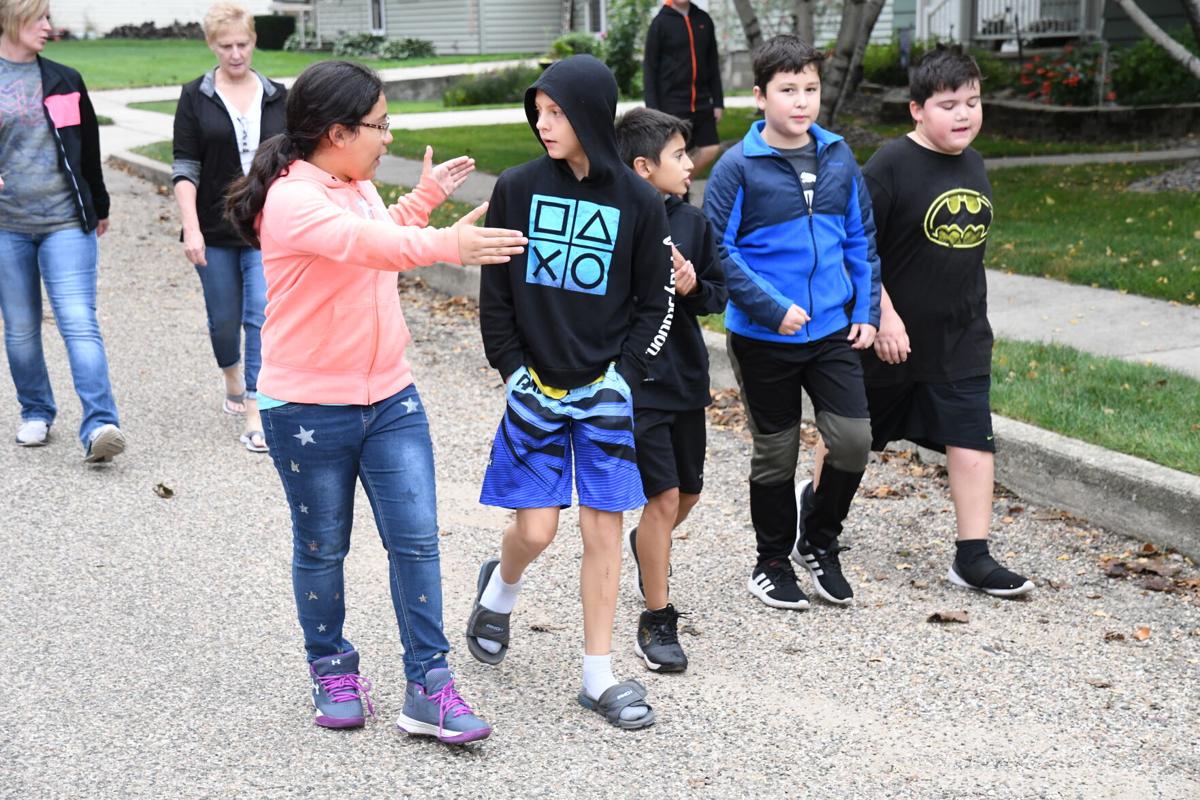 Karla Lira and Bentley Greiner chat it up in Boyden while trekking alongside their sixth-grade classmates Devan Boogerd, Santiago De Leon and Andy Rodriguez on Oct. 6.

Dylan Anderson rolls in with the rest of his sixth-grade class at the conclusion of Boyden-Hull Elementary Walk. The school in Boyden participated on Oct. 6 in 11th Annual Walk of the Healthiest State Initiative, a nonprofit that encourages Iowans to stay active.

BOYDEN—Elementary students often have energy to spare and Boyden-Hull turned that surplus into a fitness promotion with a walk around town on Oct. 6.

TK-6 students in the district participated in the 11th annual walk from the Healthiest State Initiative. The nonprofit has the self-admittedly “ambitious” goal of transforming Iowa into the country’s pinnacle of wellness.

“It’s just a great way to make a point to be healthy,” Hofmeyer said. “It’s a set-aside time to focus on exercise and choose to be healthy.”

The eight class groups had age-appropriate routes through the quiet streets of Boyden throughout the day, lasting about half an hour each. The sixth-graders took a big loop around Centennial Park four blocks from the elementary building before taking the long way back. The younger kids got a break at the park’s playground before heading straight back.

Hofmeyer said nearly all of the 323 students at Boyden-Hull Elementary participated in the walk.

The school has been involved before she took over PE instruction five years ago. The teacher said the students always seem to have a good time with the activity.

“They like a nice little break from the usual routine,” she said. “We’re more than a month into the school year now and hitting that grind. Not that it’s meant to just be a break, but the kids like the change of pace while living healthy.”

Other local education institutions held health walks on Wednesday including Kinsey Elementary in Sioux Center and Northwest Iowa Community College in Sheldon. In addition to the schools, hundreds of community organizations participated across the Hawkeye State with at least one for all 99 counties.

“It’s cool that it’s not just a school thing. It’s not a specific field, but the state of Iowa in general. It’s nice that it includes as many people as possible,” Hofmeyer said.

Cool weather throughout most of the region provided an ideal backdrop for the fitness initiative.Led by their regular classroom teachers, young learners stayed at a comfortable pace, a more steady exercise than recess without overexerting themselves. Hofmeyer said keeping things doable for all students is key to making her lessons work.

In her ninth year teaching, Hofmeyer said that she loved to be involved as a student thanks to the instructors she had growing up.

“I had a couple of really good experiences with my own PE teacher who spiked an interest in me,” she said.

Although the health walk is just one part of one day, Hofmeyer said she hopes designated time for exercise, or just enjoying a portion of the day outside, is something her pupils take in stride as they grow up. Choosing the healthier of multiple options is a focus of PE classes, and she said everyone can benefit from a few more individual decisions.

“Promoting that among kids as well as adults — to make that choice is a big thing,” she said.

Hundreds of groups and institutions across Iowa took part Wednesday in the 11th Annual Walk by the Healthiest State Initiative. In addition to Boyden-Hull Elementary Walk in Boyden, the events in the four counties of N’West Iowa were:

HARTLEY—School librarian Vella Smith loved the new building when Hartley-Melvin-Sanborn Elementary opened last school year, but there was some…