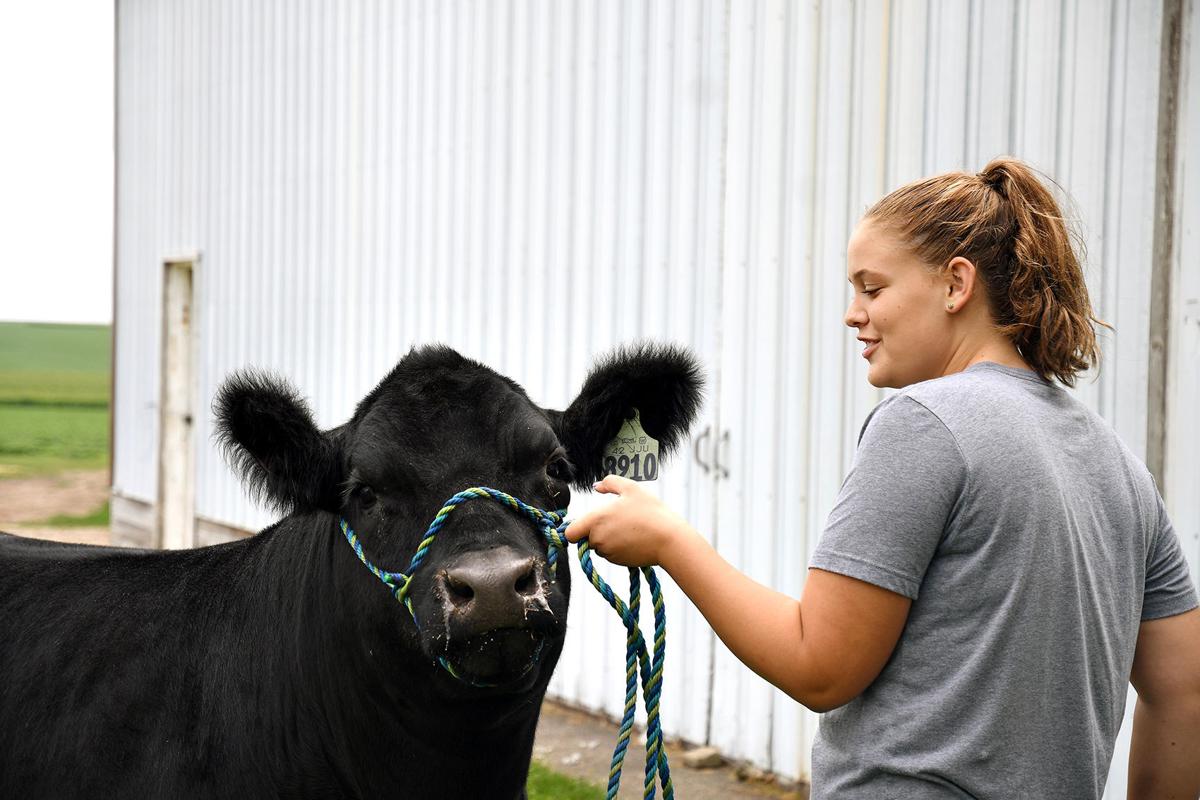 Fifteen-year-old Katie Van Den Top of Hull calms down her steer, Wilson. Van Den Top, who will be a freshman this fall at Boyden-Hull High School, was one of 25 cattle exhibitors around Iowa who was chosen to participate in the 2019 Governor’s Steer Show in Des Moines on Aug. 10. 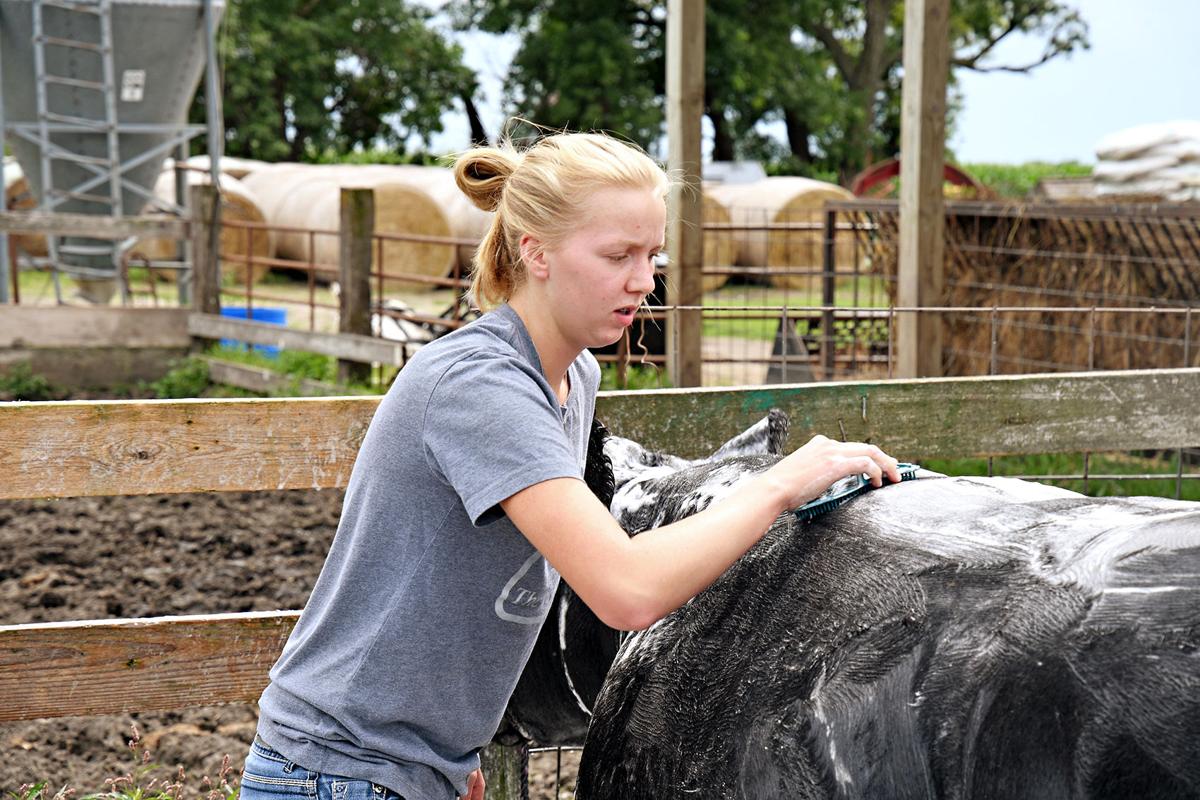 Sami Noteboom scrubs down her steer, Delbert, who will be shown at the Governor’s Charity Steer Show. Noteboom has been washing and grooming Delbert twice a day to make sure he is ready for the charity show at the Iowa State Fair in Des Moines on Aug. 10.

SHELDON—Two N’West Iowa teenagers will put their multiple years of showing calves to good use at the 2019 Governor’s Charity Steer Show.

Seventeen-year-old Sami Noteboom of Sheldon and 15-year-old Katie Van Den Top of Hull recently were tapped to participate in the annual steer show, which will be held at 4 p.m. Saturday, Aug. 10, at the Pioneer Livestock Pavilion as part of the Iowa State Fair in Des Moines.

The Governor’s Charity Steer Show is put on each year by the Iowa Beef Industry Council and the Iowa Cattlemen’s Association in partnership with the Iowa governor.

Twenty-five steers from around the state are selected to compete at the event and are sponsored by various businesses, schools and other entities in Iowa.

The steers are auctioned off after the show, with all the money going toward Iowa’s three Ronald McDonald Charity Houses. The houses, located in Sioux City, Des Moines and Iowa City, provide places to stay for families who have children 21 years and younger receiving medical care from area hospitals.

The judge pulled aside her and John Vander Veen, who showed the grand champion at the cattle show, asked if either of them would want to go to the charity steer show. Vander Veen, who will be a senior at Hartley-Melvin-Sanborn High School in Hartley, declined because he wanted to continue showing his steer, which meant Noteboom was in.

The realization that she would be one of only 25 entries in all of Iowa at the Governor’s Charity Steer Show did not fully sink in for Noteboom until later that evening when she got home from the county fair.

“I was speechless, I was like, ‘This is amazing, like I can’t believe that I’m going to this,’” she said.

Van Den Top, who has shown calves for five years, was likewise surprised when she found out her steer, Wilson, was selected for the charity show.

“I was really surprised because I didn’t think I’d be a person to get it,” Van Den Top said.

Van Den Top, who will be a freshman at Boyden-Hull High School in Hull, was at a volleyball camp at Dordt University in Sioux Center in late July when her father, Brent, received a call from the Iowa Cattlemen’s Association informing him the group had chosen to sponsor her and Wilson.

Although the steers in the show belong to the 25 participants, celebrity representatives will be the ones who will show them for the event. The celebrity showing Noteboom’s steer will be 2019 Miss Rodeo Iowa Rachael Ostrem.

Van Den Top said meeting her celebrity representative, Gov. Kim Reynolds, is the part of the show she is most looking forward to.

Her mother, Amy, said the decision to give away Wilson was a hard one for her daughter to make but that the prospect of meeting Reynolds is what convinced her to say yes.

“She heard it was the governor, and she was like, ‘Well, that’s pretty cool,” Amy said.

Van Den Top and Noteboom will groom their steers before the show and will walk alongside their celebrity representatives in the arena. They also will give pointers to the celebrities when it comes to showing the steers.

“Anything just to give back to them and be like, ‘We’re here for you, you know, like, we are supporting you and helping you out as much as possible,’” Noteboom said.

“It’s pretty awesome,” Batien said. “And to know that not only did that steer go to market and make a ton of money, but it made a ton of money for a great charity, a great cause. It’s going to help families whose kids are sick.”

PRIMGHAR—A dedication ceremony set for Monday morning, July 22, during the 2019 O’Brien County Fair will be a celebration, yet there likely wi…