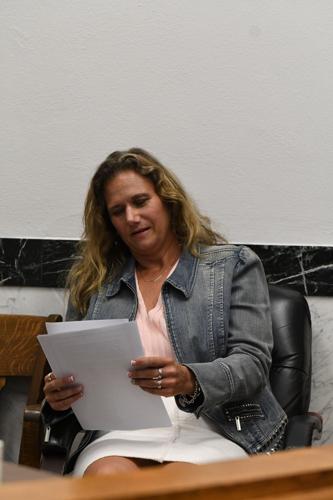 Lyon County attorney Amy Oetken updates the board of supervisors about the imminent payout from a major opioid crisis lawsuit Tuesday in Rock Rapids. The county will receive funding over the next several years and use it to prevent future painkiller abuse. 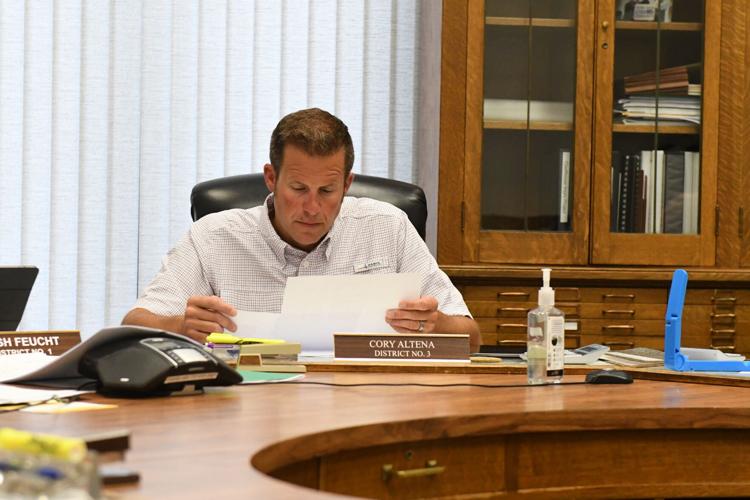 Lyon County supervisor Cory Altena reviews a document during the county board meeting Tuesday, Aug. 2, in Rock Rapids. Local governments will receive part of a multibillion-dollar settlement stemming from a national lawsuit related to the opioid crisis.

ROCK RAPIDS—Lyon County is getting a sliver of a legal settlement tied to the national opioid crisis, although the payout details are still forthcoming.

County attorney Amy Oetken updated the board of supervisors at its Tuesday meeting in Rock Rapids.

“At this point, we’re just waiting. I think it’ll move pretty quickly. After that, it’s money that is going to be available to the county. We’ll just have to decide how to spend it,” Oetken said.

The likely outcome for the county is to receive payments of various amounts over 16 years. Oetken estimated the first payment will be $4,500. The county’s final amount is expected to total upward of $100,000.

“We don’t know exactly yet, but that figure should be coming soon,” Oetken said.

The catch, the lawyer explained, is that the cash must be spent on abatement for painkiller addiction. The question, then, is: What counts toward that earmarked goal? Oetken said it is unclear what would be permitted, but she expects more guidance to be coming soon.

The case’s legal progress has moved slowly given its wide-reaching impact.

Iowa attorney general Tom Miller signed onto a multistate lawsuit that essentially alleged manufacturers of opioids — powerful prescription painkillers such as OxyContin — knew their product was addictive and prone to abuse. Companies such as Johnson & Johnson pushed to overdistribute the drugs, leading to higher, unnecessary demand.

Litigation still is ongoing, although the total liability is in the billions of dollars.

Lyon County’s cut of the multimillion payout comes on a per capita basis based on what Iowa is getting, a number still not quite determined. Given its small population, Lyon is getting 0.162 percent of the sum coming to the state.

Oetken told the supervisors that the first payment is expected to come some time in early August. The board signed up April 12 to be part of the statewide distribution at the attorney’s suggestion. At the time, supervisors said it made sense to get the funding since it was easily available.

Figuring out how to spend the money could be tricky, Oetken said. Addiction treatment could be administered through the Health Services of Lyon County department but the language from the settlement specifies “abatement,” or preventing future drug abuse.

The board agreed Tuesday to set up a committee to handle the funds. The committee includes Oetken, health administrator Melissa Stillson and delegates from the sheriff and ambulance teams.

Oetken also said there is an auditing force to make sure abatement spending complies with the settlement’s parameters, so clear reasoning should be on the record in case future projects are put under scrutiny.

Supervisors briefly discussed a public service announcement campaign as a possible use of the funding. Oetken noted other local governments will be getting their payments, so Lyon County could get ideas from them.

The board agreed to the wait-and-see approach.

“I’m thinking we’ll have to reach out to other counties and take it from there,” Oetken said.

During Tuesday’s meeting, the Lyon County Board of Supervisors also:

PRIMGHAR—Changes are on the way for how the Sioux Rivers Mental Health & Disabilities Services region will receive funding, but chief exec…