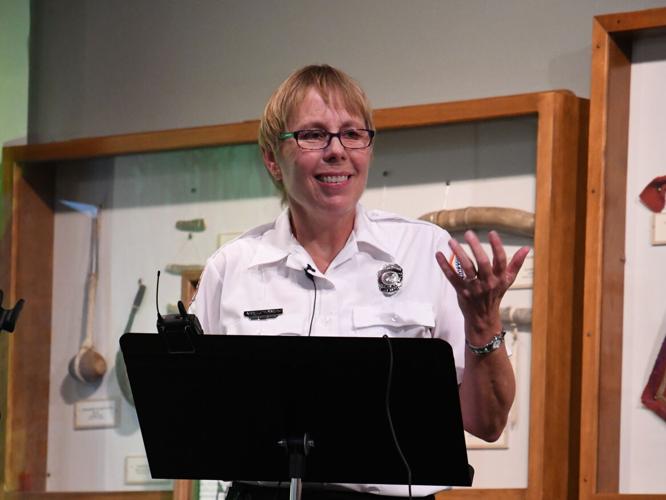 Ann Lundberg presents the history of the Orange City Fire Department at the Dutch-American Heritage Museum. The lecture was the last in a series from the museum in Orange City. 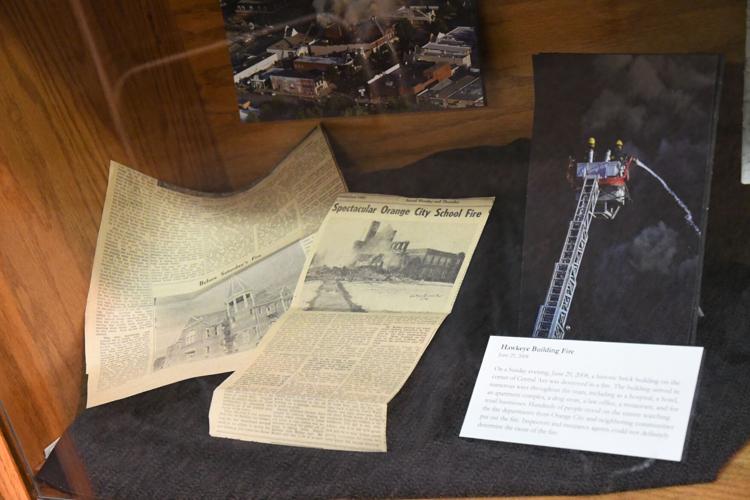 Photos and newspaper clippings from some of the most impactful infernos in Orange City Fire Department history fill a shelf at the Dutch-American Heritage Museum in Orange City. The museum hosted a presentation about the department’s story. 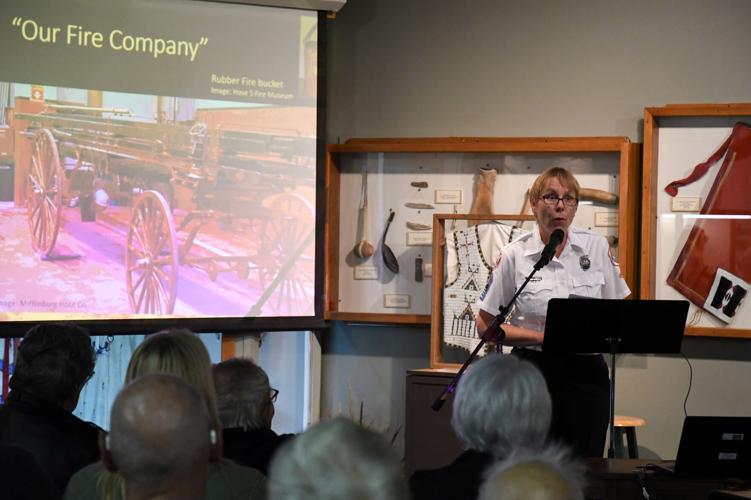 Ann Lundberg presents the history of the Orange City Fire Department at the Dutch-American Heritage Museum. The lecture was the last in a series from the museum in Orange City.

ORANGE CITY—Museum visitors kindled a love of history, blazing through the embers of the Orange City Fire Department’s history.

The Dutch-American Heritage Museum recently wrapped up its “Nights at the Museum” series with the presentation, “Orange City, Red Trucks,” by Ann Lundberg, a 22-year veteran of the Orange City Fire Department and its first female member.

That’s not to say women have been absent in the town’s trials with inferno intervention. Some of the first major fires in Orange City were fought with female assistance.

Lundberg read from a newspaper report that “no small amount of credit was due to the ladies,” which she punctuated with her own “rock ’n’ roll.”

The Rescue Hook and Ladder Company of Orange City was the first attempt at a department. It was founded in 1883 but lacked the equipment, building and other resources to be sustainable. The company folded five years later.

The city reformed the Orange City Fire Department that continued to the present in 1897.

“This is the birth of the Orange City Fire Department. Our firefighters have been doing this kind of work for well over 100 years,” Lundberg said.

Lundberg has been working for years to gather and organize the history of her department, enough to fill a book, although she said that prospect is yet to be determined.

The scholar used the example of an 1893 conflagration — during the interim where Orange City’s firefighting crew was disbanded — where Alton’s newfangled fire engine had to be called in for assistance.

“You can imagine how much salt that rubbed in the wounds of not having a fire department at all, to have Alton coming with their fancy fire engine and their fire department to save the day,” Lundberg said.

“The young ladies of Orange City — some 20 or 30 in skirts, wet and muddy — the working young heroines did some of the best and hardest work,” Lundberg again read from the paper.

The equipment started with water buckets, then various kinds of hoses and fire engines, gradually evolving to the gear the crew uses today. The Orange City Fire Department was an early adopter of the Jaws of Life, used to cut through wrecked vehicles and save those trapped inside.

Her exquisitely researched presentation covered many other firefighting incidents to torch the town.

In the middle of a 1948 night, the Orange City schoolhouse ignited, with firefighters toiling all night to contain the flames. Future chief Fred Dykstra was a student at the time, whose new shoes were not singed in his locker, although they smelled of smoke.

Tragedy befell the community when firefighter Stan Duven died in a vehicular accident while responding to a call in 1962. The fatality abolished the townsfolk’s previous practice of following the sirens to gawk at fire scenes.

Then there was the Carnes train crash of 2000. Lundberg was in her early stages of joining up when things went off the rails south of town.

She closed with a soaring sign-off.

“It’s been trial by fire more than once. Our businesses, our houses, our schools, our churches and our barns have felt the heat. But the bell, the siren, the telephone, the pager have gone off and members have climbed on those trucks prepared by their training to put the wet stuff on the red stuff as best they can,” Lundberg said.

Dutch-American Heritage Museum volunteer Al Donaldson introduced and closed the Orange City Fire Department history program. He said the monthly “Nights at the Museum” series was a success after starting in June.

The four other presentations covered Theodore Roosevelt’s Dutch ancestry, violence against Dutch immigrants during World War I, William the Silent of Orange and the local smallpox outbreak of 1882.

For its next project, the museum is collaborating with the Orange City Public Library to bring back its winter book club, starting in January. Planned titles include “Lord Grizzly” by the late great Frederick Manfred of Doon.

REGIONAL—Usually, if the firefighters come to school, it’s because the alarm is going off. In southeast Sioux County, it’s often a less hectic…