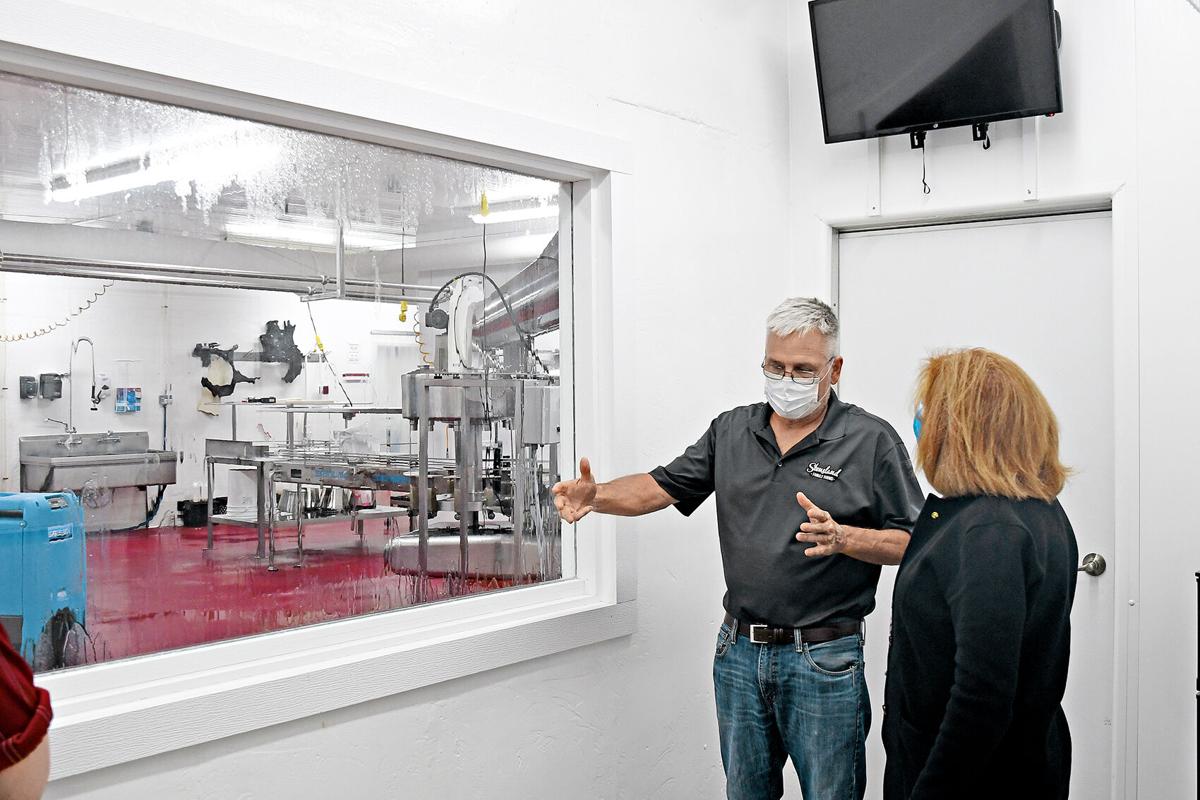 Doug Stensland, one of the owners and operators of Stensland Family Farms in rural Larchwood, talks to Bette Brand, the U.S. Department of Agriculture’s deputy undersecretary for rural development during a tour of the facility Thursday. 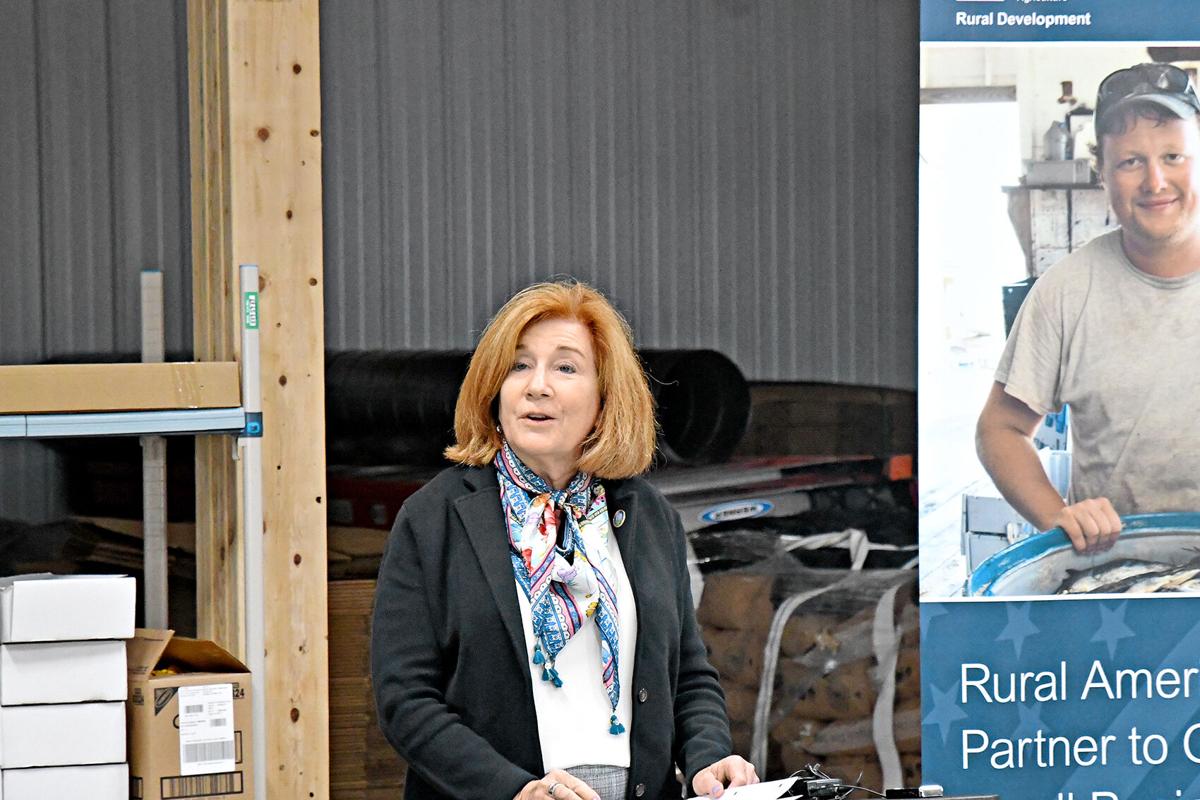 Bette Brand, the U.S. Department of Agriculture’s deputy undersecretary for rural development, announces $250,000 in funding to Stensland Family Farms on Thursday in rural Larchwood. The money, which is through the agency’s Value-Added Producer Grant, will help the dairy launch its new frozen pizza line. 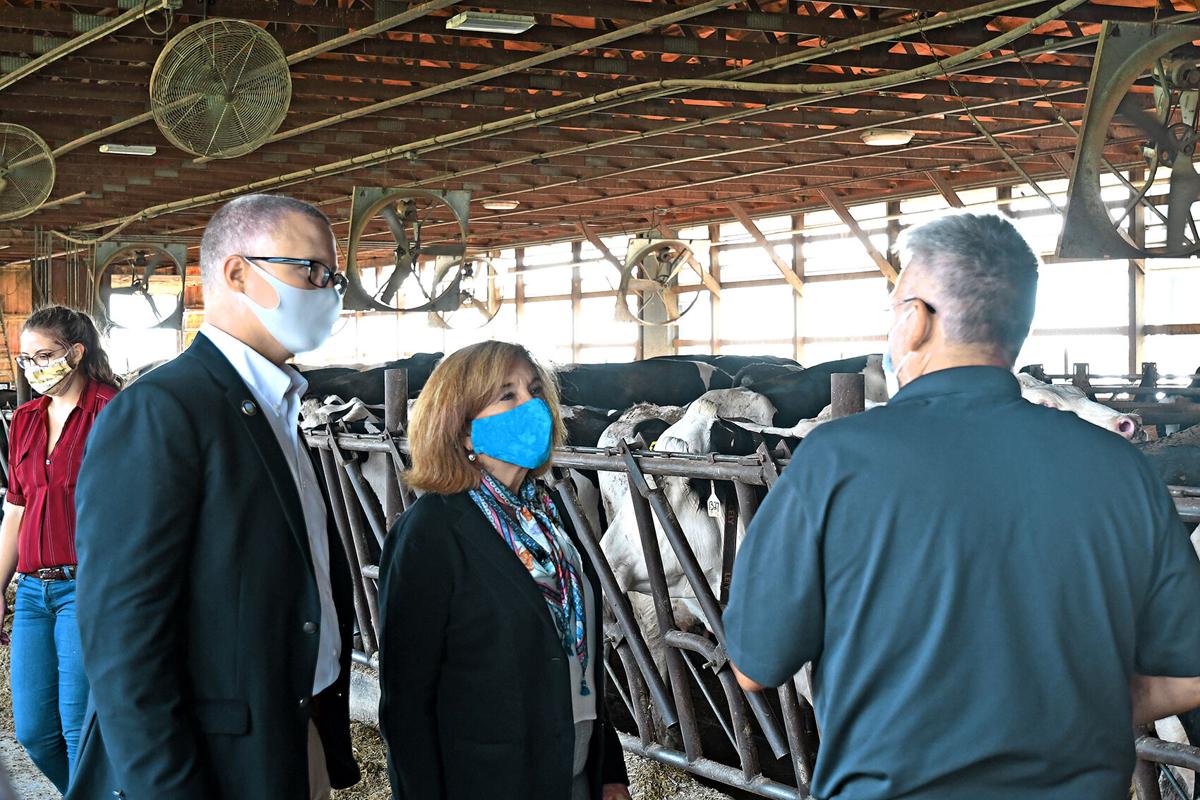 Grant Menke and Bette Brand listen while Doug Stensland, one of the owners and operators of Stensland Family Farms in rural Larchwood, talk to them about the cows at the dairy. Menke is state director for U.S. Department of Agriculture rural development in Iowa and Brand is the federal agency’s deputy undersecretary for rural development. 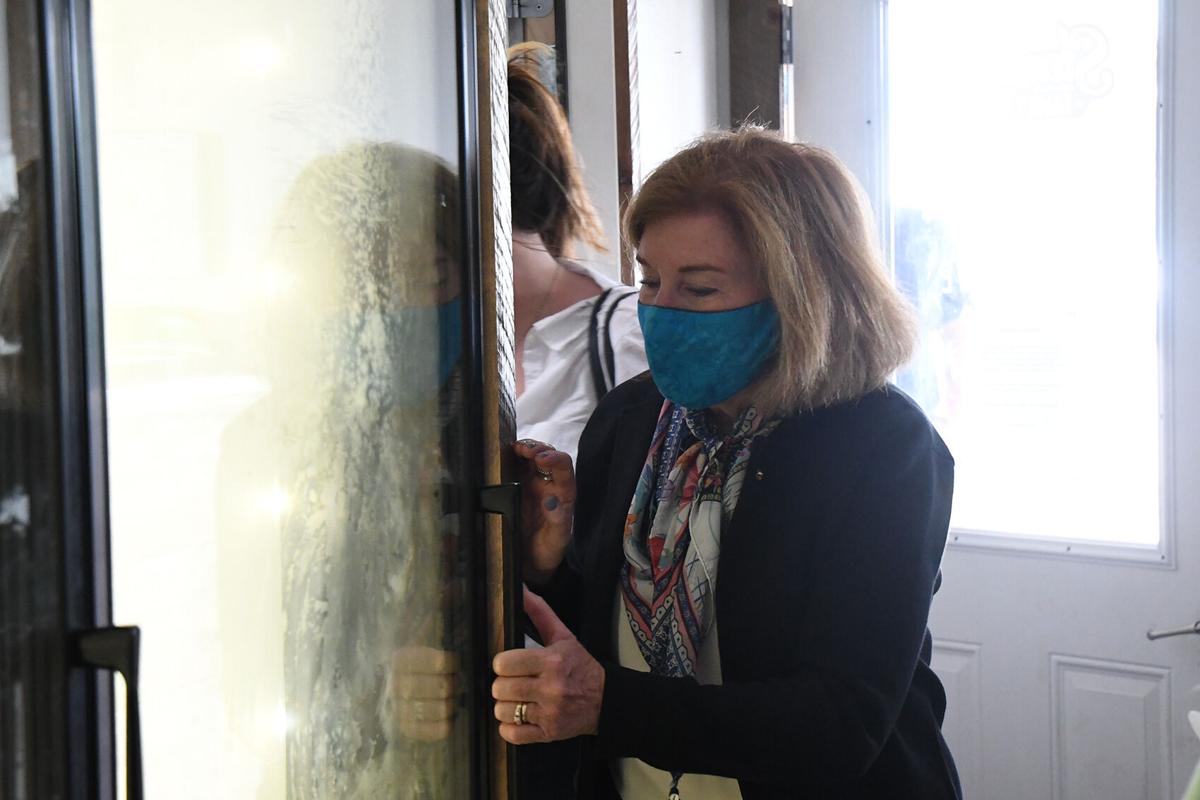 Bette Brand, the U.S. Department of Agriculture’s deputy undersecretary for rural development, goes to select a container of ice cream from the rural Larchwood dairy's on-site country store after wrapping up a tour of the facility.

LARCHWOOD—Stensland Family Farms is looking to milk a boost it recently received from the U.S. Department of Agriculture.

The money will be used to expand the marketing and sales of Stensland’s burgeoning frozen pizza line, the products of which use cheese the dairy makes.

“Today’s announcement is about so much more than pizza though,” Brand said during her visit to the dairy Thursday, Sept. 24. “It is showcasing another example of American ingenuity and rural entrepreneurial resiliency, headquartered right here in Iowa.”

The pizzas will be the latest in Stensland’s diverse product offerings, which includes milk, cheese and ice cream.

Doug Stensland, one of Stensland Family Farms’ owners and operators, led Brand on a tour of the facility and spoke about how the dairy adapted to the market disruption in March caused by the coronavirus pandemic.

The business was deemed essential after the pandemic hit, and Doug said Stensland’s diverse range of products was key in staying afloat.

“All kinds of different industries are very, very efficient and everything is driven by efficiency. But one thing I found out when COVID came in, sometimes efficiency’s not the No. 1 thing, it’s being able to change on a dime and change things,” Doug said.

“That’s one thing we were able to do because we have so much diversity in what we do. The stores would call and say ‘We can’t get any milk. You’ve got any milk?’ And that’s how we turned on a dime.”

A positive attitude also went a long way in keeping the Stensland family members and employees going, especially when the pandemic first began impacting businesses across the county in March.

“So they came up with ideas and just developed some of that stuff.”

The dairy hopes to begin rolling out its frozen pizza products later this fall.

Chelsea Stensland — who is married to one of Doug’s sons, Justin, and who is involved in the business — said the pizza aspect of the company will likely add four full-time employees and two part-time employees.

About 35 people work at the dairy, including family members. Meanwhile, Stensland employs 45-50 people who work in Sioux Falls, SD, where the company has five retail locations.

Chelsea also explained how the idea of using Stensland cheese for frozen pizzas came about.

“Our cheese comes in 40-pound blocks when we make it in the plant,” Chelsea said. “When they cut it down, there’s end pieces and scraps. So we started looking at ways to utilize those when they don’t fit our specs of sellable blocks.”

While thanking Brand and the USDA for the grant, Doug said it will benefit the family members as they continually think of new business ideas and ways to grow.

“There are a lot of areas in this country, the same thing, when they get opportunity and they start using their creativity, we want to keep encouraging that because that’s what keeps us going too,” Doug said.

“Staying positive and trying to think outside the box and not being negative about things but always looking forward.”

Bette Brand, the U.S. Department of Agriculture’s deputy undersecretary for rural development, visited Stensland Family Farms on Thursday as part of a tour in N’West Iowa this week.

At those stops, Brand highlighted investments in programs such as USDA’s ReConnect Program, which has helped connect rural areas with broadband access.

In Sioux Center, she announced $8 million in new investments for rural small businesses through the Business and Industry Coronavirus Aid, Relief and Economic Security (CARES) Act and how it will assist the ethanol plant in the Sioux County community as well as other rural industries.

During press time Thursday at Stensland Family Farms in rural Larchwood, Brand spoke about observations she has made about rural businesses and communities during the coronavirus pandemic.

“One of the things that really impresses me, especially about this area and rural Iowa, is the partnerships, the collaboration,” Brand said.

“The communities work together so well, and there are resources available at the state level, the state elected officials have been participating — as well as local officials, community leaders, there are so many people that are stepping up and willing to serve — and together everyone works together to make it work.”