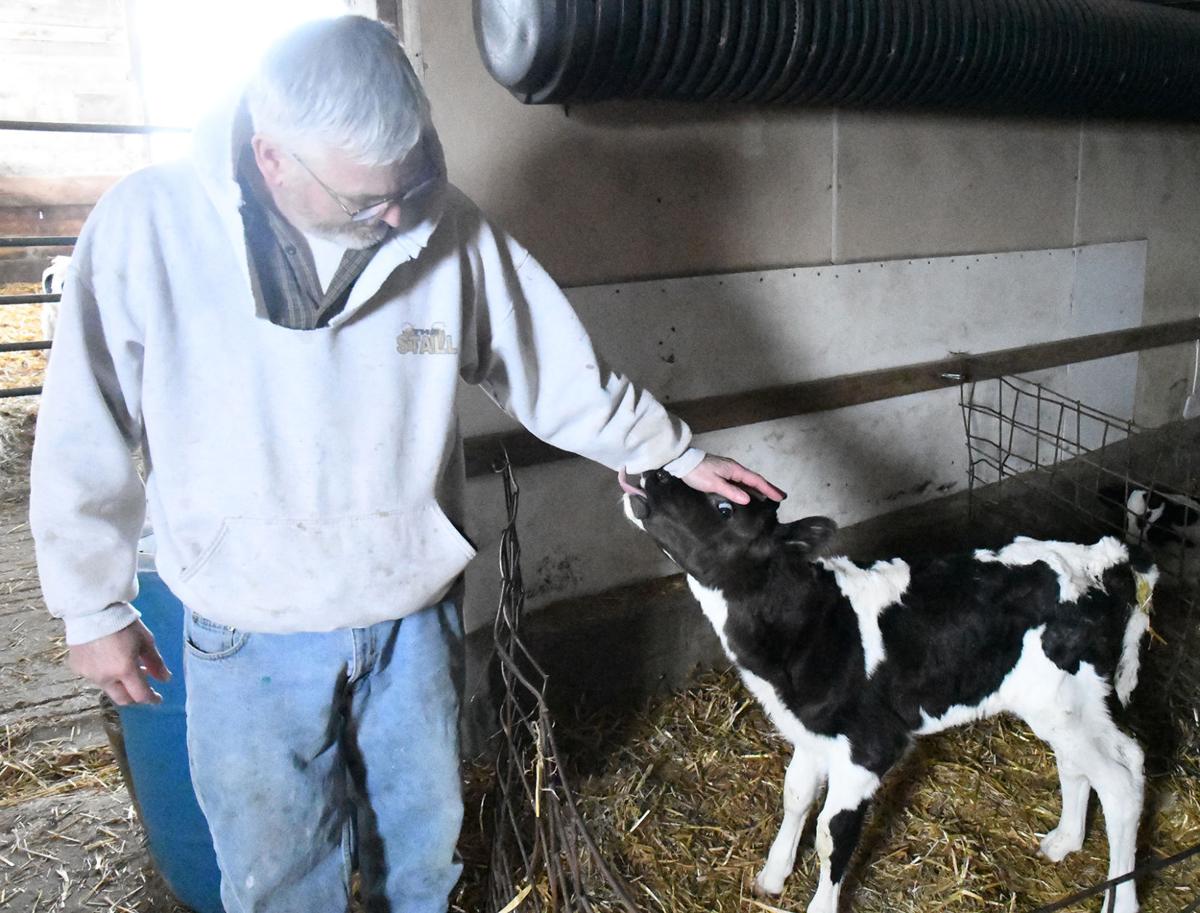 Doug Stensland, one of the owners of Stensland Family Farms, pets a calf inside the dairy operation’s nursery. The rural Larchwood business recently received the 2019 Iowa Venture Award. 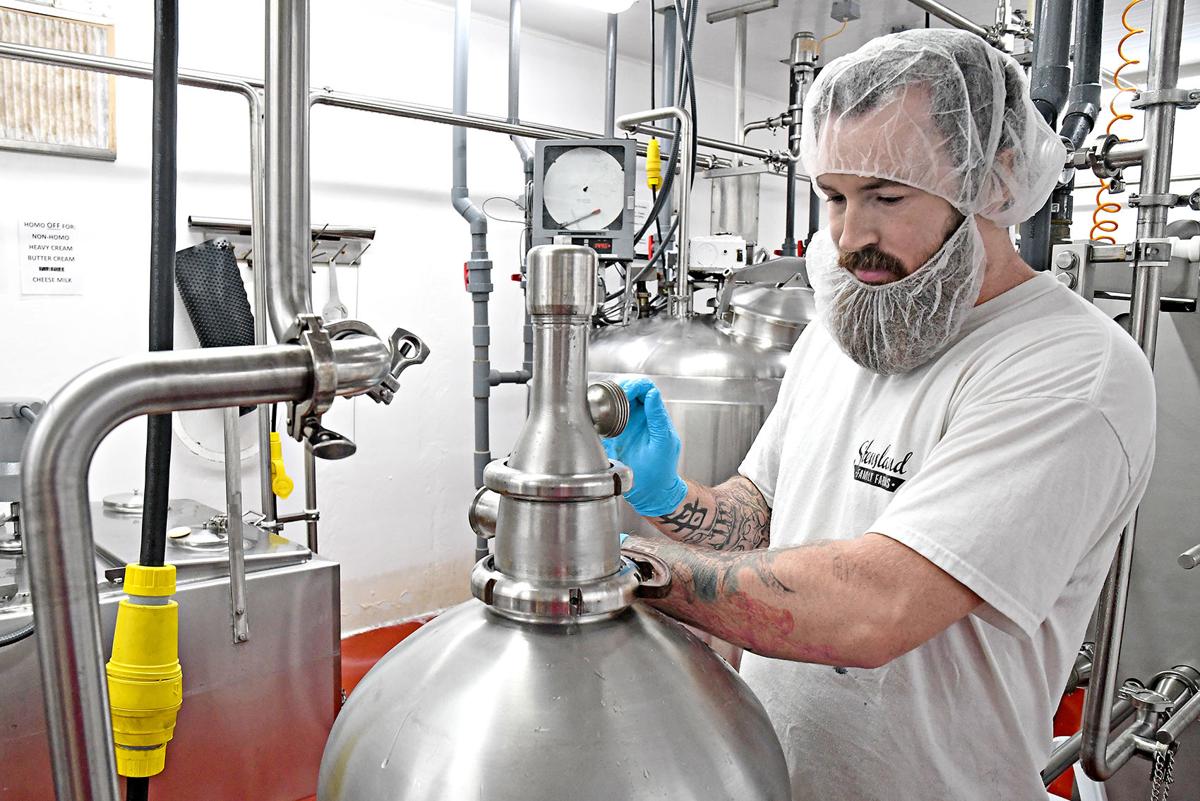 Doug Stensland, one of the owners of Stensland Family Farms, pets a calf inside the dairy operation’s nursery. The rural Larchwood business recently received the 2019 Iowa Venture Award.

The rural Larchwood dairy operation recently received the 2019 Iowa Venture Award in recognition of its significant contributions to Iowa’s economy through entrepreneurial leadership, innovation and the creation of job opportunities.

The family-owned farm in northwest Lyon County was one of eight companies in the state that received the recognition from the Iowa Area Development Group on Dec. 5 in Des Moines.

Doug Stensland, one of the farm’s owners and operators, and six of his family members made the trip to Iowa’s capital city for the awards luncheon.

“It’s quite an honor,” he said. “It’s pretty nice to be able to get recognized.”

The awards luncheon was held in conjunction with the Iowa Association of Electric Cooperatives’ annual meeting.

The Lyon Rural Electric Cooperative nominated the dairy operation for the award.

“The Iowa Venture Awards luncheon provides a forum to celebrate Iowa companies that are making a positive impact in the communities, state of Iowa and industries they serve,” said Iowa Area Development Group president Rand Fisher.

“Thank you to the Stenslands for their commitment to the environment and long success in Iowa,” he said. “Congratulations on the expanded offerings of the dairy and opening of Stensland Creamery.”

The dairy operation, established in 1915, is a multigenerational family farm located about eight miles southwest of Larchwood near Iowa’s border with South Dakota.

Doug said the creation of job opportunities was one reason why the dairy operation — home to about 25 employees — was honored.

“The biggest thing is probably the employment,” he said. “On the farm here actually, I’d say there’s probably 15 extra people besides family members that are employed.

The farm has about 1,500 acres of cropland — a rotation of alfalfa, corn, soybeans and small grains, such as oats — most of which are certified as organic.

“All of the forage our cows eat comes from the non-GMO crops we grow, which gives us the peace of mind to know they are getting the best balanced diet possible,” Doug said.

The dairy operation has a herd of about 400 cows, of which approximately 170 are milked by an automated system that includes three robotic milkers.

“This system enables the cows to be milked around the clock and at their convenience,” Doug said. “Once the cow enters the robot, the milking process begins.

“The collar they wear begins sending information straight to our computer,” he said. “The collar identifies each cow and relays weight, temperature, activity and rumination.”

Other features for the cows include an automated manure-scraping lagoon system in place so the lanes of the cows’ large free-stall shed are being cleared 24 hours a day, seven days a week.

In addition to the cows’ high-forage diet and freedom to be milked on their own schedule, each stall in the loafing shed contains a waterbed with sawdust for the cows as well as a self-grooming station.

“All of these things contribute to the health and well-being of our cows,” Doug said.

The dairy operation is home to an on-site creamery and farm store.

“We raise the crops, we milk the cows, we take the milk from the cows and we produce fat-free, 1 percent, 2 percent, whole and non-homogenized whole,” Doug said.

In addition to freshly bottled milk, the dairy operation uses the milk its cows produce for ice cream, aged cheese and cheese curds.

“We do five aged cheeses — mild, cheddar, Colby, Monterey Jack and Pepper Jack,” Doug said. “And then we do about nine different types of seasoned fresh cheese curds.”

The farm is most famous in the region for its ice cream, of which it has about 60 flavors.

Doug and Mona’s son Kyle is in charge of the farm operations — including the crops and livestock — with the assistance of Doug.

Leah oversees all of the dairy operation’s marketing and promotions.

Chelsea, Justin’s wife, takes care of coordinating tours of the dairy operation’s facilities, among other responsibilities.

The farm and surrounding area features four generations of the Stensland family, including Doug’s parents, Art and Rosie.

Doug and Mona have 11 grandchildren, a few of whom are old enough to help out at the dairy operation.

“The most important part is the grandkids having an opportunity as they’re de­­veloping and learning all these different aspects of the world,” Doug said.

“They can learn all that right here,” he said. “If they come and stay or if they don’t and go out into the world, it’s just going to build their experience.”

The past decade for the farm has seen the addition of the automated robotic milking system, the on-site creamery and store, and tours of its facilities.

“It’s been the most challenging time we’ve ever had as a family because it’s just crazy,” Doug said. “What we’ve learned is unbelievable.

“With our family members and the amount of people in the family we have in it, if we didn’t have that, we could never do this,” he said.

Stensland Family Farms near Larchwood was established in 1915 by Tobias and Inga Stensland.

Art’s young sons grew up milking and working on the farm. Eventually, Art’s oldest son Doug joined his father in the dairy operation, which was shuttered in 1990.

Fast-forward to 2003. Art’s 17-year-old twin grandsons Jason and Justin approached him about restarting the dairy operation as a means to earn money for college.

The twins’ parents, Doug and Mona, helped the boys acquire the funds needed, and with the knowledge from their father and grandfather, Jason and Justin began putting hours in before and after school, milking twice a day with the help of their younger brother Kyle.

Over the next eight years, the dairy operation added more Stensland family members to the business and an automated robotic system milking nearly 200 cows.

In 2015, the farm broke ground on a creamery that began processing milk, cheese and ice cream the next year, which is also when it started offering tours of its facilities.

Stensland Family Farms Ice Cream and Country Store opened its first location in Sioux Falls, SD, in 2016 and its second location in 2019.

For more information, call the dairy operation, which is located at 1664 Ashley Ave. in rural Larchwood, at 712-202-1910, visit www.stenslandfamilyfarms.com or find the farm on Facebook.

LARCHWOOD—The goal of one rural Lyon County family is to bring fresh, healthy dairy and other products from their farm to people’s tables.