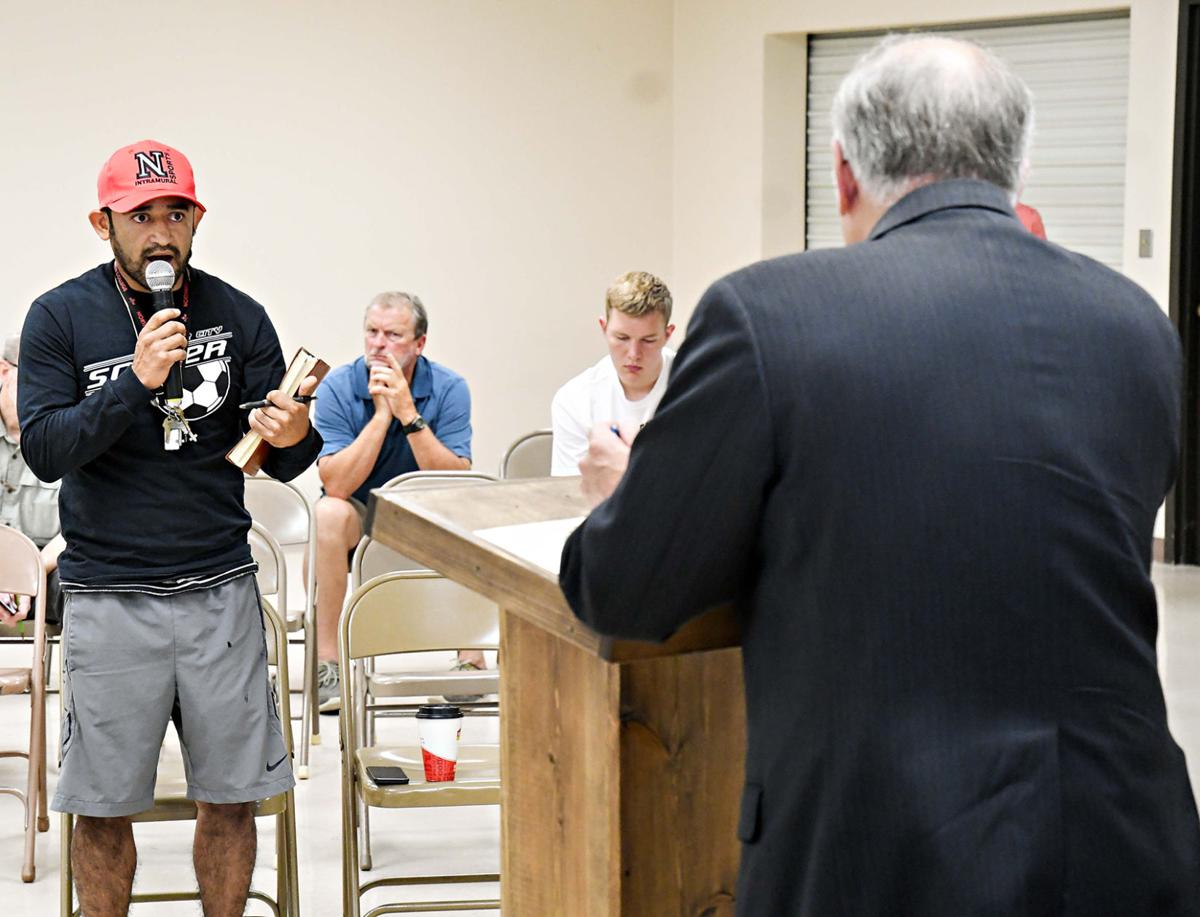 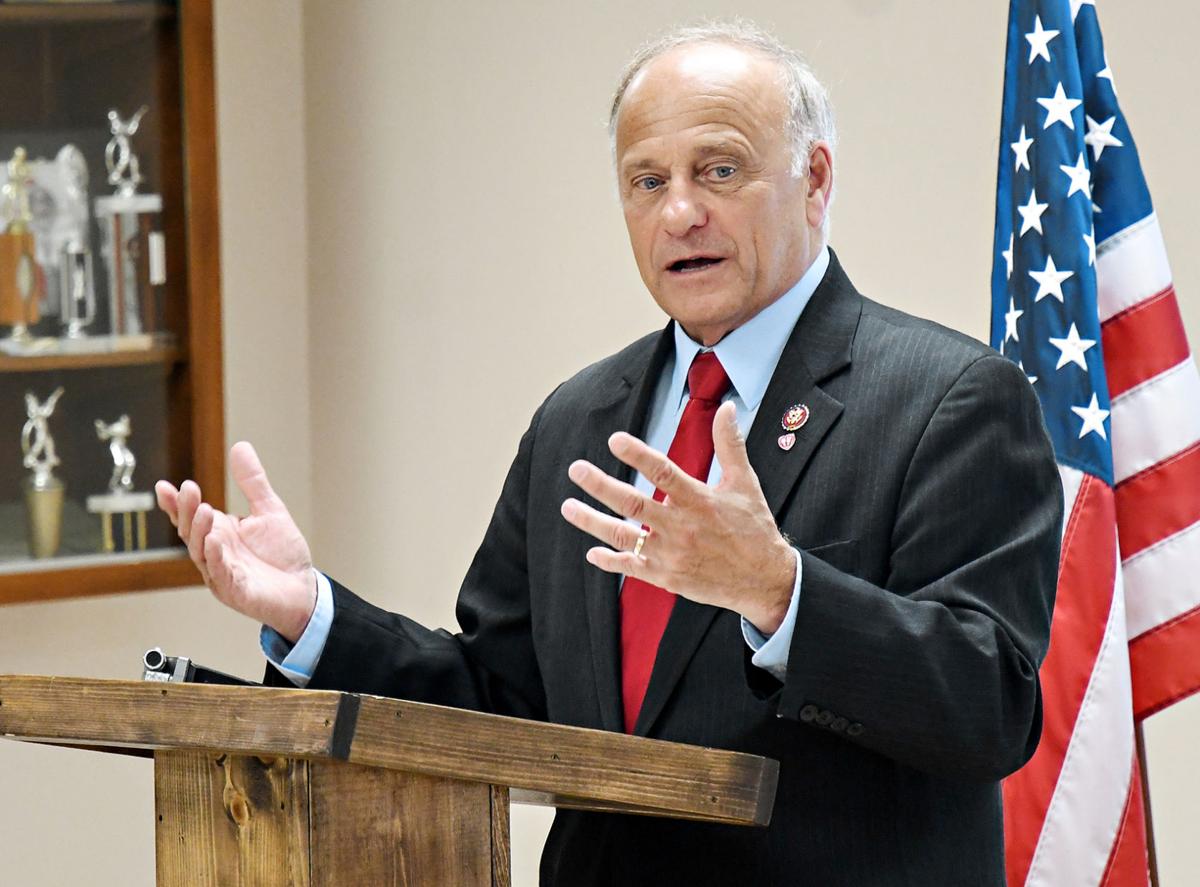 “I have great-looking calves and I didn’t get them from smuggling drugs; I got them from playing soccer,” Ruiz said, referencing King’s infamous 2013 comments about illegal immigrants entering the United States from the Mexican border.

For context, the Republican representative for Iowa’s 4th Congressional District told conservative news outlet Newsmax during an interview about immigration policies that “For everyone who’s a valedictorian, there’s another 100 out there who weigh 130 pounds — and they’ve got calves the size of cantaloupes because they’re hauling 75 pounds of marijuana across the desert.”

Ruiz — who is a DREAMer from Sioux County, meaning he was brought to the United States illegally as a child and is in the country under the Deferred Action for Childhood Arrivals policy — made the comment in defense of those crossing the U.S. border at Mexico.

Before the sidebar into calves, Ruiz asked King what he was doing to combat the opioid epidemic in Iowa. Ruiz was concerned because he said he has seen the consequences of opioid addiction firsthand.

“You mentioned something about two-thirds of those epidemics here in American being related to opioids. What opioids are being manufactured in Mexico and being illegally trafficked into America and fueling the epidemic here?” Ruiz asked. “Why is this a continued leverage to continue to say that there is illegal immigrants bringing illegal narcotics into this country when that is not the case?”

King said about a third of the opioid deaths in America stem from prescription drugs and the remainder come from illegal drugs but it is hard to know for sure because data between the two get mixed. He also laid out a case against fentanyl, a powerful synthetic opioid that his dire consequences for those who abuse it.

Ruiz and King had a follow-up conversation after the town hall ended which ended in a hug between the two men. After the meeting, Ruiz said he did not intentionally plan on speaking during the event, but thought he needed to. He called the conversation with King productive.

“I wasn’t trying to be divisive, I wasn’t trying to start anything, I just hate people sharing the wrong messages,” Ruiz said. “When you’re a leader and you are in the position, you have a responsibility to be real with your people as well as still uphold the law and have that balance.”

However, as a native of Mexico, Ruiz still was not quite comfortable with how he perceived King’s view of people trying to move into the United State from south of the border.

“To use that as a cop-out that the number one source that’s driving illegal immigrants up through Mexico is because of drugs, that’s just inaccurate,” Ruiz said. “I hate that, that’s being said because opioids has been the number one epidemic. It’s past cocaine, LSD, marijuana, whatever you want to name. That is like up there and that’s something is systematic.”

For the most part, King and the sparse crowd at the Alton Community Center primarily discussed policy issues during the town hall, which was No. 17 of 39 planned events in his vast congressional district.

In N’West Iowa, King has held town halls in Lyon, O’Brien and Sioux counties and only Osceola County remains, although the congressman recently visited Sibley to tour parts of the Osceola County seat community.

King said he does not see the trade war with China ending anytime soon and gave a mixed opinion about the latest actions from the U.S. Environmental Protection Agency and its director, Andrew Wheeler.

While King, a longtime supporter of the Renewable Fuel Standard, was happy about the approval of year-round E15 sales, he admonished the EPA’s continued issuance of waivers to smaller petroleum refineries allowing them to skirt RFS mandates.

“They have been granting more and more waivers all along,” King said. “It seemed to me that when it was Scott Pruitt was the administrator for the EPA, anytime something good happened for our products here, like ethanol, then something happened on the other side to help placate the petroleum industry.

“It looks like that hasn’t changed under Mr. Wheeler and I let him know. I’m glad we are year-round E15, that will help over the long run — maybe quite a lot — but I’m not very happy that they are undercutting the RFS and that is something that has to change.”

King briefly addressed the situation during his Sioux County town hall gathering in Alton Saturday, June 15, after being asked a question by Jeff VanDerWerff of Orange City.

“Curious, that none of them have taken an issue with a single vote or position I’ve taken on anything,” King said. “So I would think if they want something different, it’s up to them to say so. I get called a few names by them and I think they are going to have to defend that.

“But, you want to be a member of Congress, it’s a couple of things that are pretty important. One, you have to be able to multitask; you have to have a lot of plates spinning on the cue sticks and keep them all — they can wobble, but they can’t fall off. That’s one thing and I haven’t seen that demonstrated.”

King’s second point was that lawmakers have to be able to discern the truth.

“I’ve been in the public eye here for over two decades — I’ve swum in this fishbowl for at least that long — and every time I’ve stepped out in public or everything I’ve done in private has always been what I believe to be the objective truth,” King said, “and I don’t think there’s anyone out there that can say I’ve come to misinform you or I flip-flopped on an issue or I’ve ever gone soft on any of the principles that I’ve said to you that are important to me and I think they are the same principles that are important to you.”

Take 5: #ICYMI Stories you should read

HULL—State Sen. Randy Feenstra (R-Hull) announced on Wednesday his decision to step down as chair of the Senate Ways and Means Committee to al…