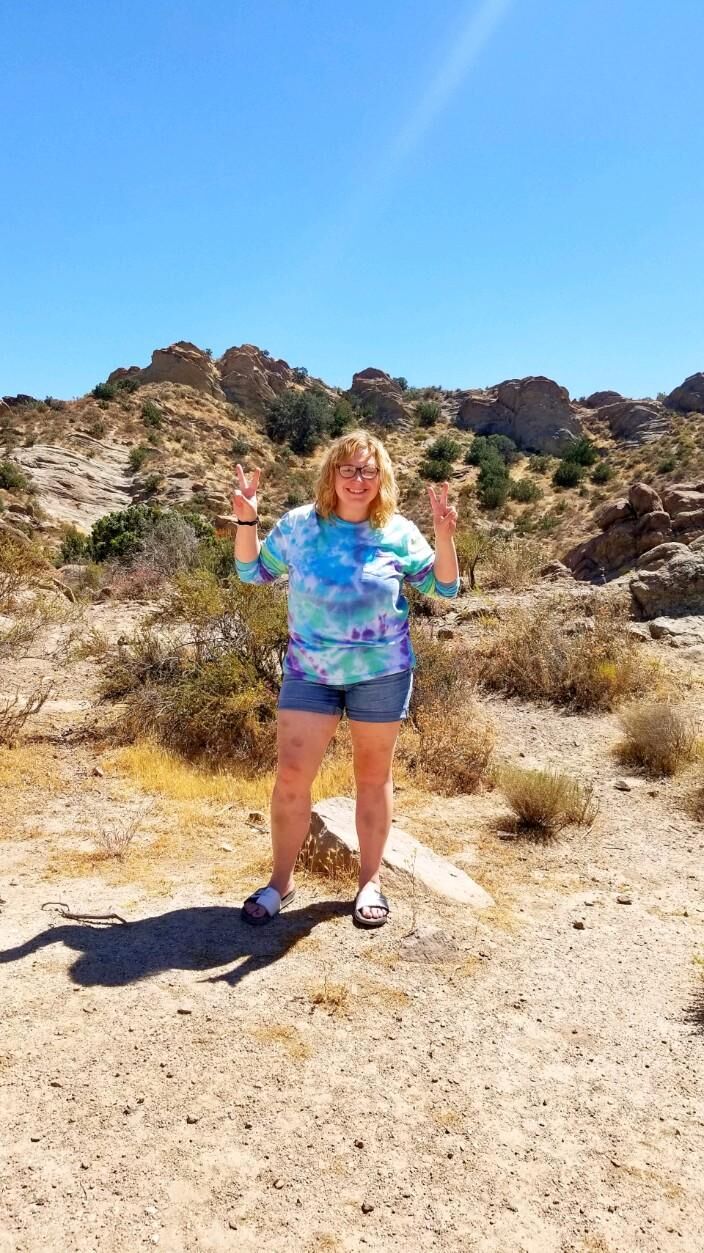 Sheldon native Kate Knight poses in the desert during her time on "The Great Grace Race." 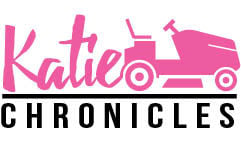 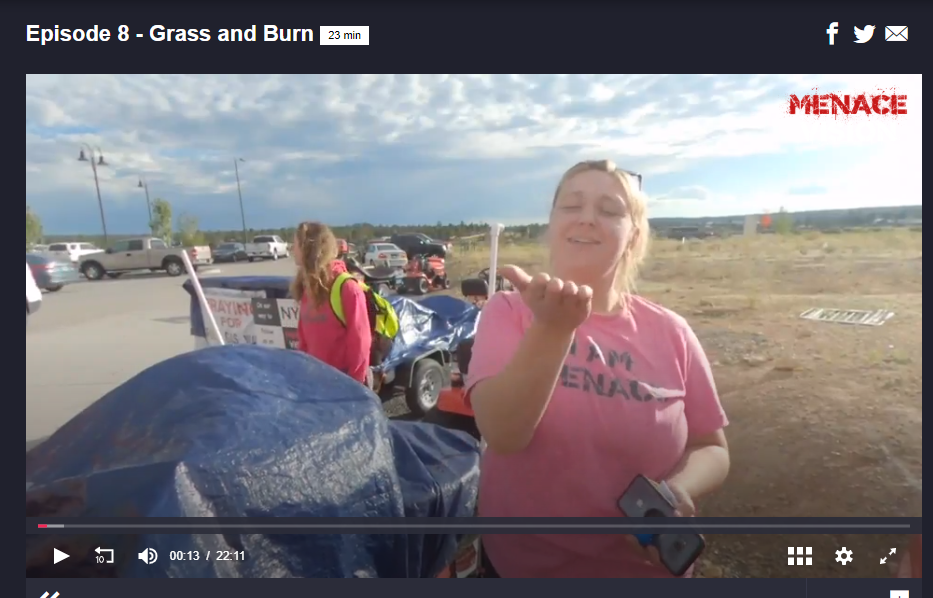 Sheldon native Katie Knight blows a kiss to the camera during a break while filming "The Great Grass Race." 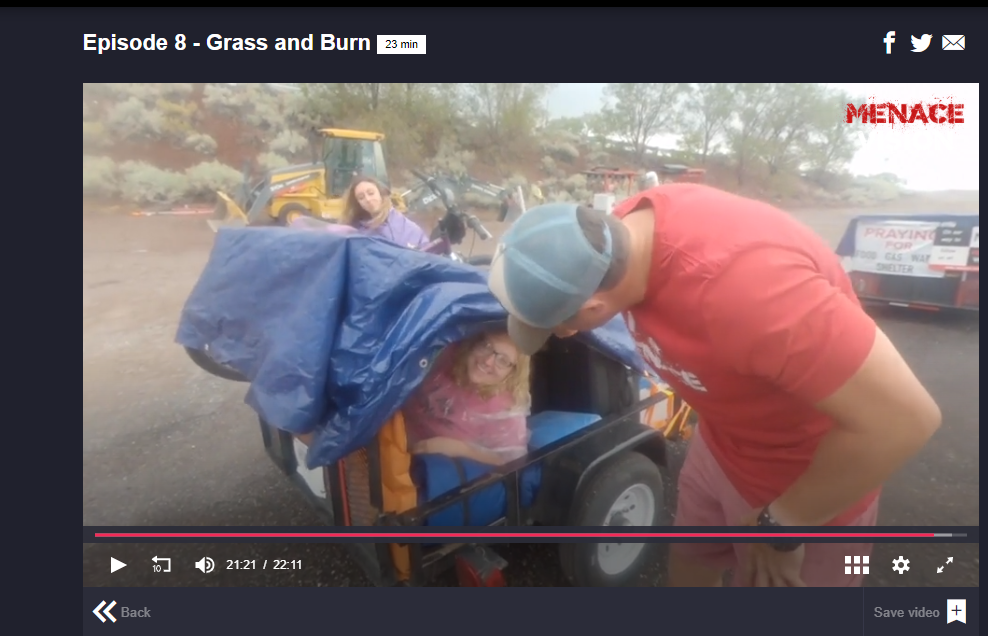 Sheldon native Katie Knight gets a visit from Stephen Zampier of the Red Team after contestants on "The Great Grass Race" weathered through rainfall. 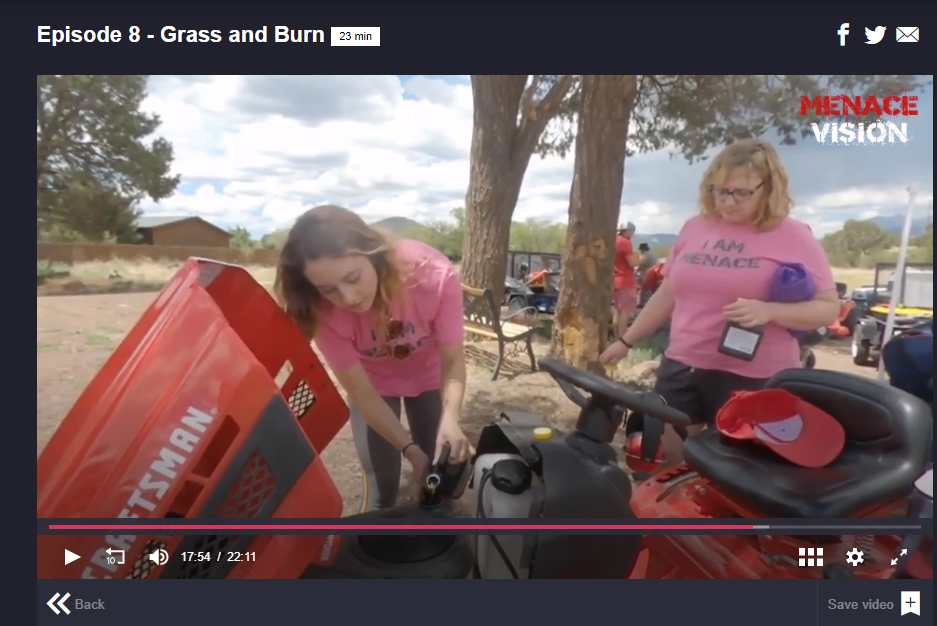 Tiffany Gill of California pours oil into the riding lawn mower she shares with Katie Knight while they compete on “The Great Grass Race.” The women are members of the Pink Team

REGIONAL—Welcome to the Katie Chronicles, a weekly segment from The Mail-Sun/nwestiowa.com in which we recap Sheldon native Katie Knight’s time on “The Great Grass Race,” a new reality TV show airing through Menace Vision.

Starting from California, Katie is spending the next three months traveling across the country on a riding lawn mower with an eventual goal of arriving in New York City.

Watch new episodes on the Menace Vision app or at watch.menacevision.com.

This episode starts with Katie giving an update after a rough outing for the competitors. Katie and the crew were woke up in the middle of the night as they camped in a park.

“All of sudden my tent got ripped open and there was a flashlight in my face and he was like ‘Get up!’ and said something else and I thought it was the camera crew and I was like, “Noooo, I’m still asleep,” she said.

The intruders turned out to be deputies from a local sheriff’s office. Katie said she and Tiffany Gill, her partner on the Pink Team, sat on a bench and answered questions from the deputies, which revolved around the show.

The contestants initially were told to leave but the deputies gave them permission to stay in the park they were sleeping at.

Jackie Sessoms, a member of the Orange Team, said it was “a pretty scary” experience.

“I just like to have fun and not have any of this crazy stuff happen,” she said. “If you’re a cop and you’ve been watching, we’re not doing anything wrong; we’re just trying to promote love and peace and happiness and friendship so go blue!”

Once they got going again, Katie noted it was rough but she felt rejuvenated.

Things did get better. At the next town, people who have been following the show via social media started coming out to offer support and bring the contestants’ food and other items. Remember, they can’t spend or accept any money on the show so they have to solely rely on donations from strangers to continue with their journey.

As they got going again after receiving the goods, the teams were stopped by a highway patrol unit.

According to the show’s narrator, the officers intend to shut down the entire production. The officers noted there were multiple safety violations with the race.

A member of each team is blindfolded and tasked with digging through a pile of stones to find a gold nugget and their partner, whose vision is not obscured, has to guide them. Once the nugget is found, it has to be carried across a field and dropped into a bucket. Teams are only allowed to carry one nugget at a time. The challenge ends when all of the gold nuggets are found.

The show did not say who won the challenge but it did acknowledge that production was nearly canceled, which prompted the producers to give all the teams a tow; however, they towed them into the Mojave Desert in the middle of summer. Not sure if that’s a win or not.

Turns out it was not a win as contestant Jackie Sessoms kind of had a meltdown about being plopped in the desert and quit the show after talking with the producers.

The next challenge took place in Oatman, AZ, and contestants were asked to take selfies at different local landmarks. Again, no winner was announced.

The episode opens with our contestants being treated to burgers and milkshakes from a local diner and then establishing camp in a field. A member of the Red Team made sure to get the OK from a nearby business to avoid another interaction with law enforcement.

Near Flagstaff, AZ, a man named Howard bought gas for the entire team and Sam McManis of the Arizona Daily Sun came out to do a story on the show. His article was published on July 18, according to the paper’s website.

One intent of the program was to show that the kindness of strangers still exists and that the country still is more united than divided, which was displayed by the multiple acts of generosity in this episode. People have been flagging teams down to give them supplies.

The teams encountered some bad weather and had to drive through rain for a bit.

When asked by a cameraman if they are staying dry, Katie replied: “Kind of; Tiffany said she was a little wet.”

Karima Spates of the Blue Team was ready to quit after going through the rain and almost being sideswiped while riding in the trailer. She threw her partner, Wealthy Guan, under the bus — calling him “the weakest link — and said he does not sleep which impacts their travel.

The two got into a big blowup toward the end of the episode with Clinton Brand of the Green Team playing peacemaker and separating the two bickering teammates.

In typical fashion, the episode ended on a cliffhanger and showed a few flashes of what might be to come including a member of the law enforcement community showing up to talk to the teams, another recurring theme.

The Blue Team must have kissed and made up as this episode opens with Karima and Wealthy bonding over a martial arts lesson followed by a flashback to their big argument in the previous episode with additional footage.

Turns out the argument led to someone calling law enforcement out of concern; however, Stephen Zampier of the Red Team defused the situation by telling the officers the fight was them re-enacting a fight for the show.

During the next stop, Tiffany and Katie recapped the fight for a cameraman while also giggling about some of the insults Karima and Wealthy leveled at each other. This stop also again showed the kindness of strangers.

“She got us a hotel room because she felt so bad that it was raining and cold and we hadn’t showered since Wednesday, so thank you Jean,” Katie said before blowing an appreciative kiss to the camera.

Before departing, Karima and Wealthy officially made up and even hugged it out although Wealthy slept outside while most of the other constants enjoyed the donated hotel rooms minus the snoring of a few.

The next challenge for the teams had to carry a cup of water from one designated spot to another and whichever team had the most water left won. The winning team was given some head-start miles and some other perks from the producers.

Some of the teams made lids for their cups out of trash bags and another team used adhesive bandages.

As the teams were preparing to take off in the rain, Katie could be seen hanging out in the Pink Team’s tarp-covered trailer. Stephen lifted one of the tarp’s flaps and asked Katie how she was doing.

“Just chilling,” she said before flashing the peace sign.

REGIONAL—Welcome to the Katie Chronicles, a weekly segment from The Mail-Sun/nwestiowa.com in which we recap Sheldon native Katie Knight’s tim…