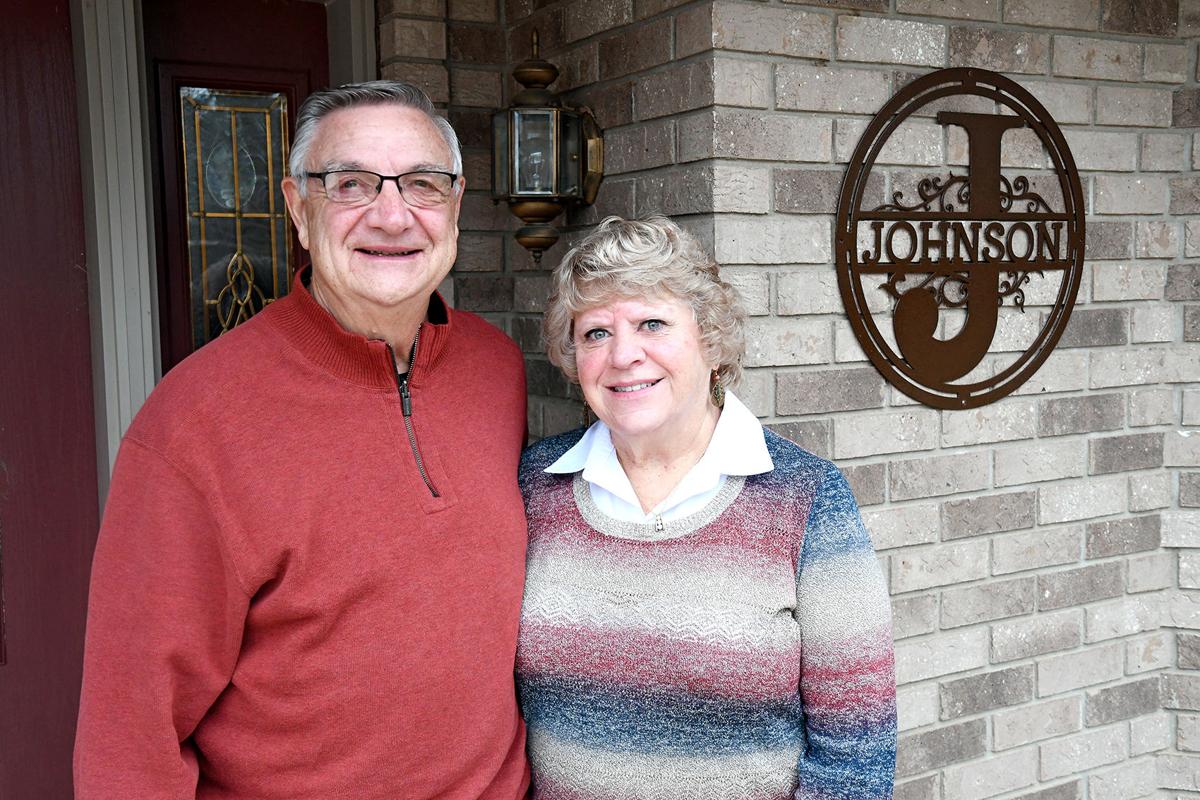 Jim and Colleen Johnson have lived in Sutherland for nearly 50 years. The Hartley High School sweethearts moved to the O’Brien County community in December 1969 and have been active in it. 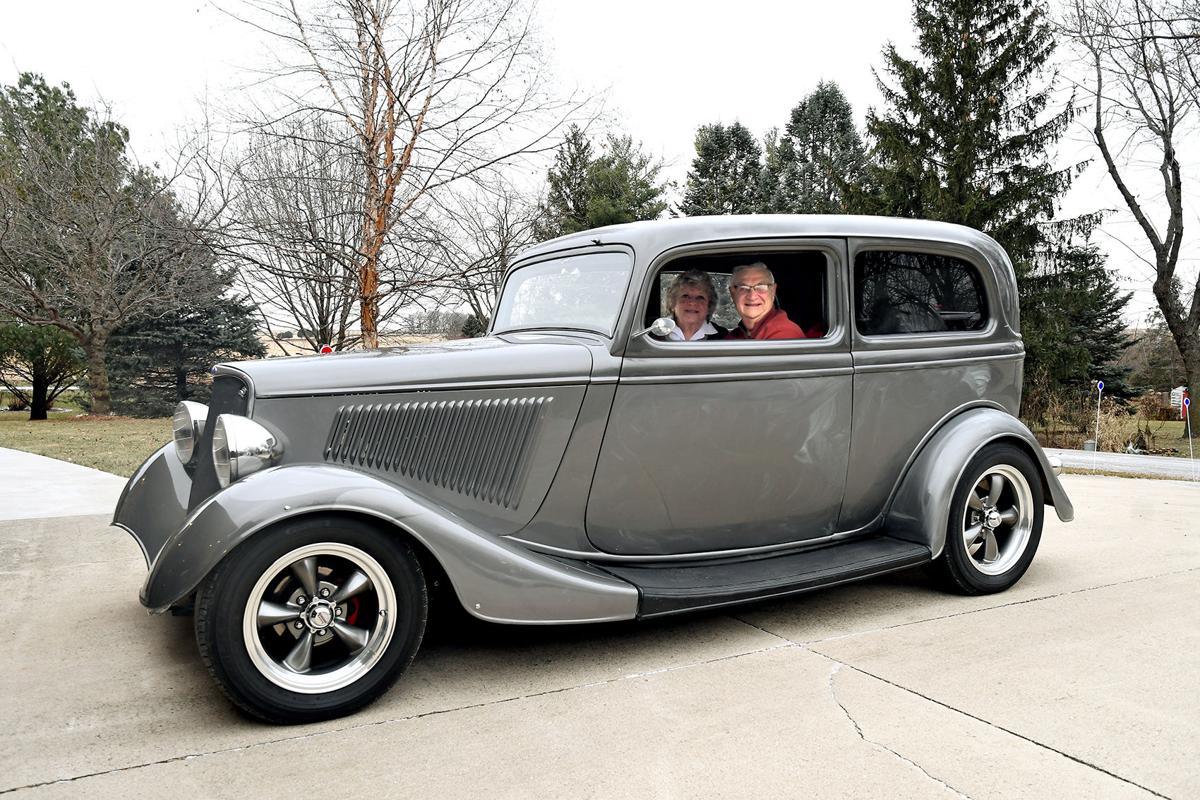 Colleen and Jim Johnson of Sutherland enjoy taking their classic cars, like their two-tone gray 1934 Ford Victoria, for a drive. The couple also own a black 1972 Plymouth Barracuda.

Jim and Colleen Johnson have lived in Sutherland for nearly 50 years. The Hartley High School sweethearts moved to the O’Brien County community in December 1969 and have been active in it.

Colleen and Jim Johnson of Sutherland enjoy taking their classic cars, like their two-tone gray 1934 Ford Victoria, for a drive. The couple also own a black 1972 Plymouth Barracuda.

SUTHERLAND—Jim and Colleen Johnson feel blessed to have lived in Sutherland for nearly 50 years.

The couple has been involved in Sutherland in a myriad of ways since moving to the southeast O’Brien County town of about 600 in December 1969.

“The community here has been very good to us,” Jim said. “We love the community and we’ve developed a lot of really good friendships here over the years.”

The Hartley High School sweethearts moved to Sutherland so Jim could work as an assistant cashier at Security State Bank’s downtown branch.

Within a couple of years, he become a loan officer at the financial institution. By 1980, he held the position of the bank’s CEO and president.

Jim, who has been the chairman of the bank’s board of directors for about 38 years, sold most of his shares in the financial institution in 2006 to his and Colleen’s son Darin.

Darin joined Security State in 2000 as a loan officer. He later bought Chuck’s shares and became the bank’s majority owner; he also is the financial institution’s CEO and president.

“We’ve had a great working relationship,” Jim said of himself and Darin.

Outside of the bank, Jim has been involved in Sutherland through several community organizations, including the American Legion, the Masonic Lodge, the Sutherland Commercial Club, the Sutherland Ruritan Club and Sutherland United Methodist Church.

He serves on the city’s Economic Development Board. Colleen previously served on that same board.

“I had no idea what the job was,” she said of being a city clerk. “I enjoyed helping people. I was a very hands-on clerk. I wasn’t one that just did the paperwork.

“Some of the mayors that I served under worked out of town, so I was the go-to person all the time with the day-to-day things that go on,” she said.

Colleen was the community’s first female mayor. She considered herself a full-time city leader.

“I had the opportunity to be a full-time mayor basically because I didn’t need to have that other full-time job outside of being mayor,” she said.

“I enjoyed seeing things get done in the town,” she said. “I had some really good city council members to work with. There was a lot of interest in making things happen.”

Like Jim, Colleen has been involved in Sutherland through several community organizations, including the Sutherland Commercial Club, Sutherland United Methodist Church and two women’s groups — the Home and Hobby Club and the Century 3 Club.

“It was fun while we did it,” she said of the women’s groups. “We had a great time. We had a cross-section of ladies that were all involved with it.”

Colleen — who helped lead the preparations for the community’s quasquicentennial, or 125th anniversary celebration, in 2008 — also is a member of the city’s Community Fund Board.

Outside of being involved in the community, Jim and Colleen enjoy traveling and shopping for antiques, especially car memorabilia. They have been all over the United States and around the world.

When they decide to go out, they occasionally take one of their classic cars for a drive. They own a two-tone gray 1934 Ford Victoria and a black 1972 Plymouth Barracuda.

Spending time with their children and grandchildren — who are kept occupied by various school and other activities — also keep Jim and Colleen busy.

Darin resides in Sutherland with his wife, Jenny; they have three children. Jim and Colleen’s daughter Sonya lives in Emmetsburg with her husband, Judd Duhn; they have four kids.

“We’re very blessed to have our family so close,” Jim said. “Many do not have that.”

Jim, who is 71, and Colleen (Gonnerman), who turned 70 on Thursday, feel blessed for the life they have lived together. They started dating in 1963 and celebrated their 50th wedding anniversary on May 4 this year.

“We are blessed,” Jim said. “It’s the good Lord that’s blessed us.”

“We’re both in relatively good health,” Colleen said. “We’ve had great family, great friends and a great community to support us all these years.”

SUTHERLAND—People can bank on seeing a renovated interior at the only financial institution in Sutherland.