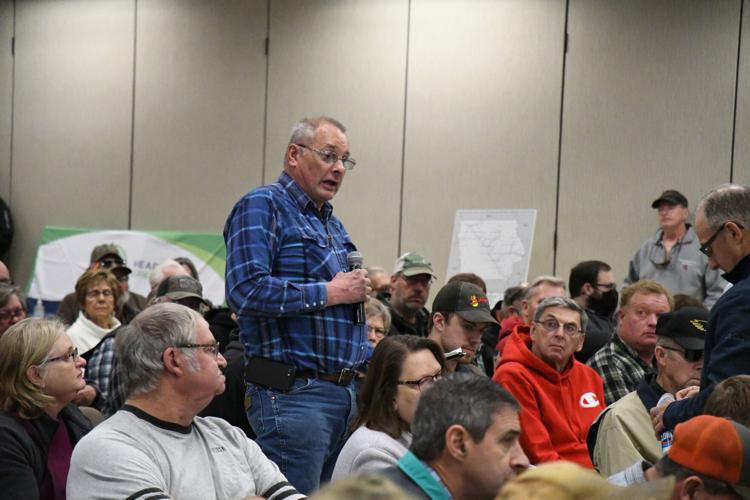 Dan Rentschler is the first to ask a question at the Nov. 29 Heartland Greenway public meeting in Rock Rapids. The pipeline’s proposed route runs through his farm on the South Dakota state line in rural Larchwood. 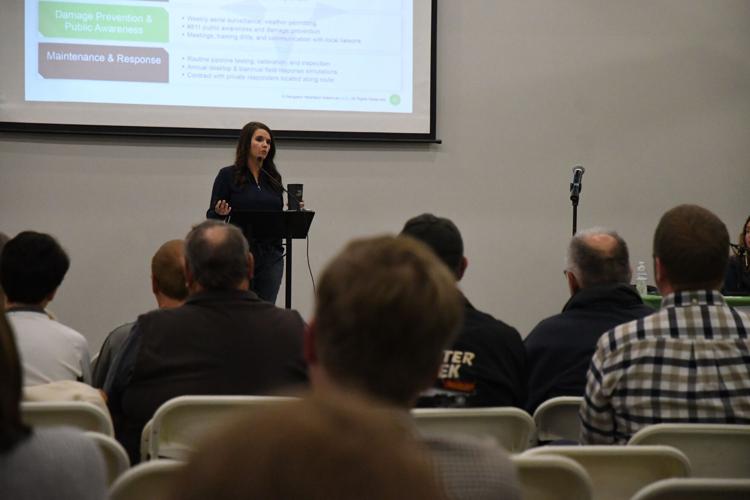 Elizabeth Burns-Thompson presents Navigator’s public meeting on Dec. 1 in Sibley for its proposed Heartland Greenway pipeline. The Osceola County gathering was lightly attended to compared to the others in Lyon and O'Brien counties, where the line is planned to cut through more land. 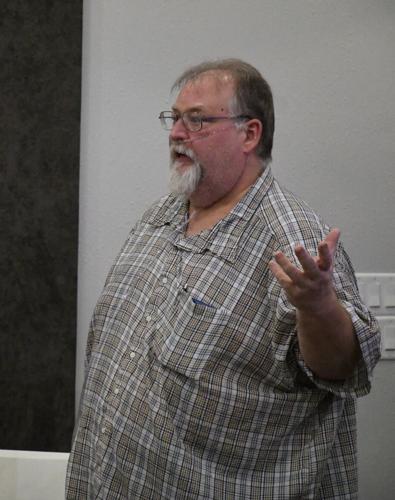 Marty Johnson of rural Sibley speaks during the informational meeting for the Heartland Greenway on Dec. 1 at the Ninth Street Centre.

REGIONAL—Farmers were already wary of one new pipeline plowing through N’West Iowa, and now a second carbon-capture project is funneling its way through the system.

This article is Part 3 of Pipe Dreams, a N'West Iowa REVIEW series on carbon-capture projects.

Corporate reps started their legally obligated informational meetings, starting in late November. The first was in Rock Rapids, followed by Sheldon and Sibley, then dozens more across the Hawkeye State.

The public meetings are meant to give landowners and other locals time to ask questions and learn about pending infrastructure projects, but the folks from Navigator were the ones who learned very quickly about Iowan’s resistance to their pipeline.

“We can be angry and we can complain, but if we don’t turn that into action, these pipelines will be built.”

“I don’t feel warm and fuzzy,” one said in Rock Rapids.

“I dispute your values,” another added.

“We’ve lost our minds as well as our money,” said a Sibley attendee.

The meetings looked a lot like the ones in September for the Midwest Carbon Express, another CO2 line set to come through Lyon, Sioux and O’Brien counties.

The Sierra Club is organizing the movement against the two pipelines. Jess Mazour is the conservation coordinator for the Iowa chapter.

“If we let one in, it makes it easier for the second one,” Mazour said. “There’s some long-term planning for this type of infrastructure, and Iowa is going to be crisscrossed a dozen more times.”

She said the Heartland Greenway and the Midwest Carbon Express — which is run by Summit Carbon Solutions of the Summit Agricultural Group — are offering a false solution for climate change.

The pipelines are on the docket in the first place because the ethanol industry needs to lower its carbon footprint to remain competitive against electric vehicles, which are becoming cheaper and more popular in the United States and worldwide.

That’s the heart of the Heartland Greenway pitch.

“I wouldn’t even say it’s trickle-down because it’s not trickling anywhere. It’s staying right there at home in most of these places,” Elizabeth Burns-Thompson said.

Burns-Thompson runs Navigator’s public and government affairs and is the company’s face at the public meetings, taking most of the heat from apprehensive agriculturalists.

She framed the carbon capture and storage, commonly called CCS, as the way forward for corn production with about 57 percent of the Iowa crop going to ethanol, according to Iowa Corn Growers Association, more than a quarter the U.S. supply.

“Earlier this year, we saw the ethanol industry collectively set the target of net-zero, net-negative by 2050. Things like CCS will be part of that process in order to meet those goals,” Burns-Thompson said. “It’s not going to be the golden ticket that does everything, but will necessarily be part of that broader equation of what helps us get there.”

That analysis seems to be the consensus for biofuel makers including small firms such as Siouxland Energy Cooperative — which is signed on with the Summit project — and Fortune 500 players such as Valero.

Valero is the commercial anchor of the Navigator project, providing eight of the 20 or so plants Navigator is looking to include in the Heartland Greenway route.

The financial side has backing from BlackRock, the world’s largest asset manager, holding $9.5 trillion in market value according to its September quarterly report.

The big-business stench — paired with Navigator’s out-of-state status — was something many detractors latched onto during its public meetings.

Marty Johnson lives on a farm just outside Sibley. He said he doesn’t see how the value added to the agriculture industry will reach local bank accounts.

“The small guy gets left out again, basically. They have participation in it, is what I’m saying, so there ought to be something,” Johnson said.

Property owners on the route of either pipeline would receive compensation for a portion of the crop value that would have been planted on the land. The basic package has a three-year payout of 100 percent then 80 percent then 60 percent reimbursement.

Many farmers said that’s not enough money or time before the farm is back to pre-pipeline productivity. Some mentioned the aftermath they are still dealing with after the Dakota Access Pipeline dug through the region.

Mazour worked as an activist against that project too. She said all these massive infrastructure deals that use America’s farmland have the same problem.

“Summit and Navigator created this situation. They’re coming in there saying they know what’s best for rural Iowa,” she said.

The Sierra Club organizer said it is going to take a lot more than her chapter of a few thousand members to fight the pipeline. She said farmers and ecologists are “unlikely allies,” but their causes are aligned against what they see as an intrusion on Iowans.

She added that Native Americans play a key part in the coalition against the carbon-capture projects.

The Sierra Club has a four-point outline for Iowans opposed to the proposed carbon dioxide pipelines, the Heartland Greenway and the Midwest Carbon Express.

1. Don’t sign. No landowner should voluntarily sign an easement, the group says. Even if they are OK with the pipeline on their property, they should not accept the first offer from the company or agree to anything without a lawyer.

2. Educate yourself. Everyone should be educated on how the group says the pipelines are harmful to the environment without economic benefit to local farmers.

3. Lodge a complaint. Official written submissions to the Iowa Utilities Board are read and considered by the state regulatory agency when it makes permitting decisions next year.

4. Connect and fight back. The Sierra Club is in the process of gathering and organizing objectors across the pipeline route.

“In my experience working on the Dakota Access Pipeline, I worked a lot with indigenous communities in Iowa and in other states. There is something to be said about the wisdom and the stewardship and those beliefs that are held in the indigenous community that I think that we as Iowans — we believe in them but we have forgotten them,” Mazour said.

The power to stop the pipeline ultimately sits in state and federal agencies. The pipelines need permits from the Iowa Utilities Board. There also is oversight from the Environmental Protection Agency and U.S. Department of Transportation.

Petitions and would-be approvals for the Heartland Greenway are set start next year with construction planned in 2023. Navigator has a goal of the 2024-25 winter to have the line complete the carbon dioxide flowing.

Mazour said the key to stopping the company’s plans is to get organized early and persist until it is canceled along with the Midwest Carbon Express.

“We can be angry and we can complain, but if we don’t turn that into action, these pipelines will be built,” Mazour said. “That means we have to get engaged because we’re not going to stop this on our own. No one person is going to stop this. We’ll stop these together.”

REGIONAL—The past 12 months in N’West Iowa were jam-packed with developments detailed in the pages of The N’West Iowa REVIEW.

PRIMGHAR—The O’Brien County Board of Supervisors had plenty of questions for a Summit Carbon Solutions representative at its meeting Tuesday, …