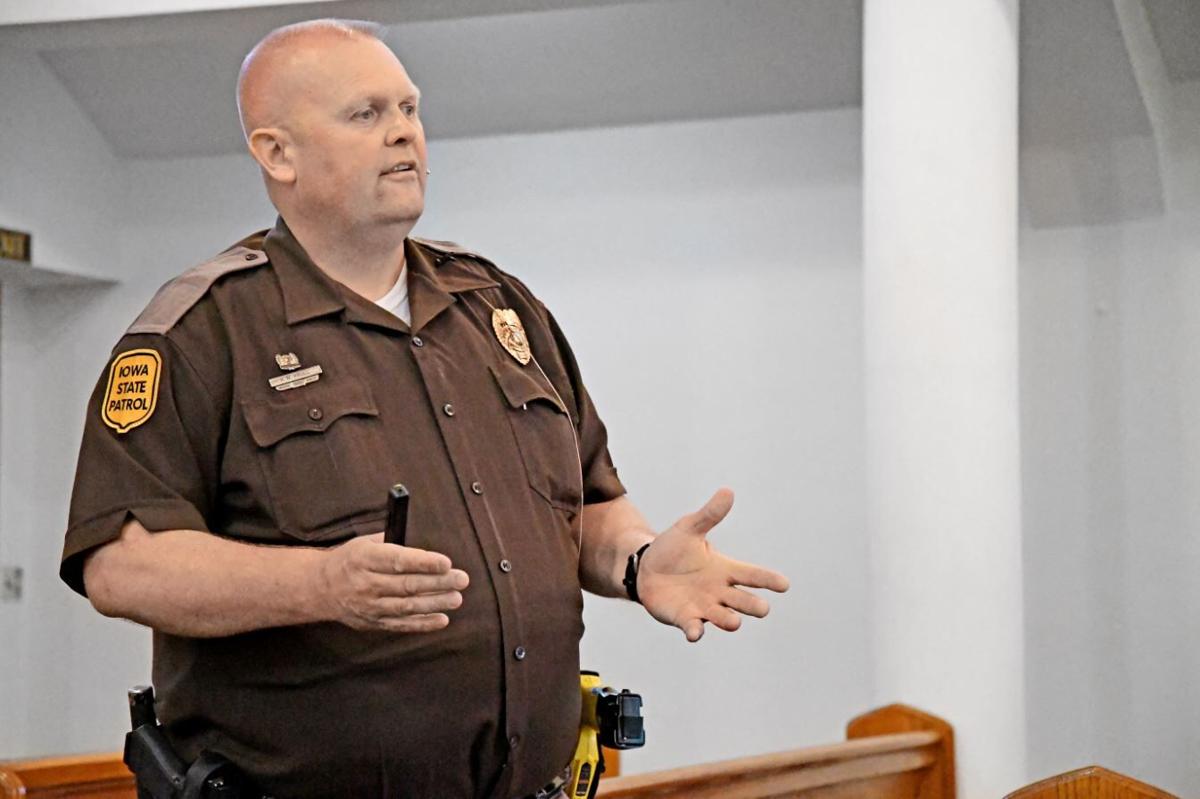 Iowa State Patrol trooper Kevin Krull describes methods traffickers use to lure or coerce victims into situations where they are exploited for labor or sex. Krull spoke about human trafficking at a program held June 3 at St. Paul’s Lutheran Church in Hartley. 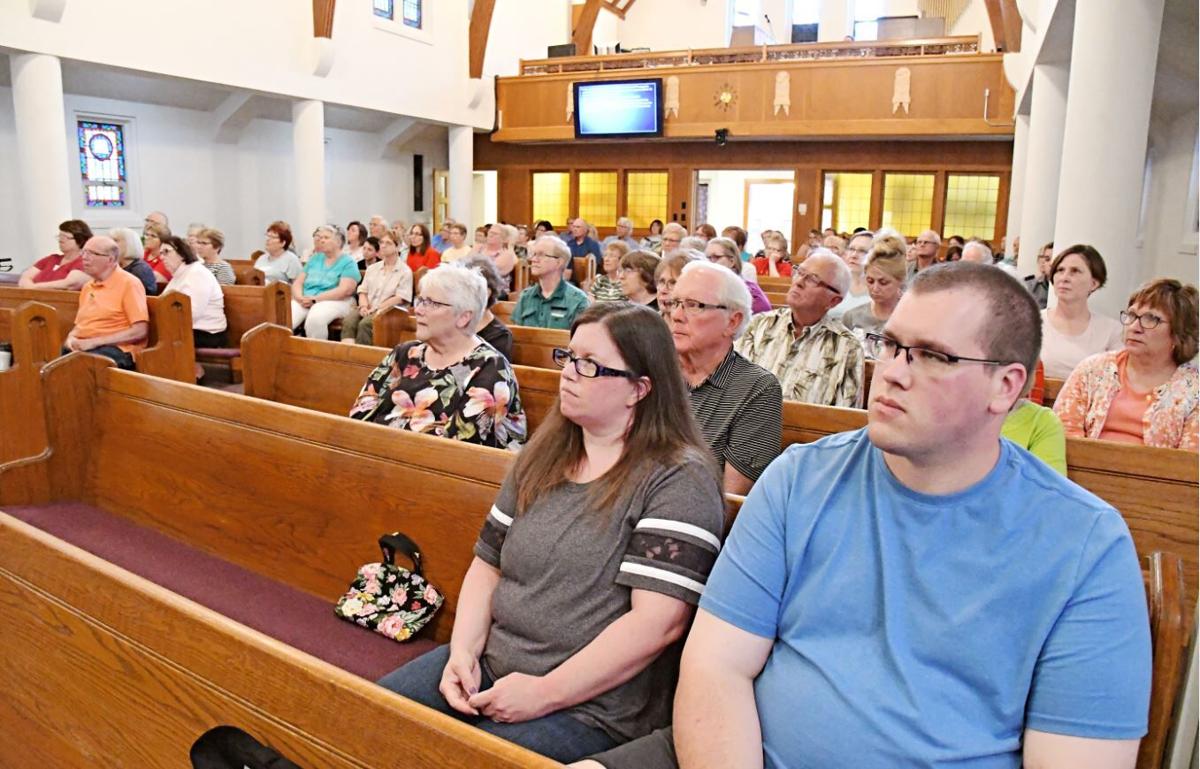 Over 60 people turned out to learn about the realities of human trafficking in N’West Iowa during a program by the Iowa State Patrol on June 3 at St. Paul’s Lutheran Church in Hartley.

Iowa State Patrol trooper Kevin Krull describes methods traffickers use to lure or coerce victims into situations where they are exploited for labor or sex. Krull spoke about human trafficking at a program held June 3 at St. Paul’s Lutheran Church in Hartley.

Over 60 people turned out to learn about the realities of human trafficking in N’West Iowa during a program by the Iowa State Patrol on June 3 at St. Paul’s Lutheran Church in Hartley.

Iowa State Patrol troopers Kevin Krull and Paul Gardner want people to know that, yes, human trafficking can and does happen in N’West Iowa and in fact could happen anywhere.

An audience of over 60 people packed the pews to listen and ask questions afterward.

“A common myth is that ‘this doesn’t happen in my hometown.’ But trafficking is everywhere,” Krull said.

Human trafficking is defined as the unlawful act of transporting or coercing people into forced labor or sexual exploitation to make a profit off them. People who purchase sex, labor or other services from trafficked victims are also guilty of human trafficking.

The June 3 program focused primarily on sex trafficking, although Krull shared statistics and information about labor trafficking as well.

According to the National Center for Missing and Exploited children, one in six runaways are at risk of being trafficked.

Among those who are trafficked, 83 percent have a history of being a runaway, 45 percent have substance abuse issues and 53 percent have had problems staying in school. Krull said these statistics, while useful in describing the scope of trafficking, don’t necessarily narrow down who is most likely to be trafficked.

“Forty-five percent is less than half. That means 55 percent of people don’t have substance abuse. So it’s not always a problem kid,” Krull said. “What that’s telling me is there are a lot of people out there who are really susceptible and we can’t always tell.”

Although girls and women make up the majority of victims of sex trafficking, Krull added boys are also exploited.

Along the same lines, Krull said that traffickers are hard to spot. A slide of his presentation showed mug shots of individuals convicted of sex trafficking in Iowa and neighboring states. It included people of all ages, races and genders.

According to the Regional Organized Crime Information Center based in Nashville, one trafficking victim can earn $300,000 for their trafficker in a year, with less cost and risk than transporting or selling drugs.

“This is an industry that has extremely high profits, but at the cost of the victims, vulnerable people,” Krull said. “One of the things we need to do is take the market away.”

The majority of law enforcement action in cases of trafficking tends to happen after people have already been trafficked. Even in cases when law enforcement knows an individual is being trafficked, they are sometimes unable to act until they can get enough evidence to press charges against perpetrators.

“The problem is if you find the victim, it’s already happened. But you have to have the evidence. We’d like to find the perpetrator before the victim, but oftentimes it doesn’t work that way,” Krull said.

Krull described Iowa as a “hot spot” for trafficking because of its location between major cities such as Minneapolis, Chicago and Omaha and the interstates and major highways that cross the state.

Although exact numbers of trafficking victims are unknown, 98 cases of human trafficking in Iowa were reported to the National Human Trafficking Hotline in 2019, a number that’s steadily risen.

He added that rural areas like N’West Iowa can be attractive to traffickers because of the lower levels of law enforcement.

“They do not want to be seen by law enforcement because they’re not looking for it,” Krull said.

However, the troopers noted that although trafficking may involve travel, that is not always the case.

“Sometimes the people being trafficked sleep in their own beds at night,” Krull said.

The idea that trafficking always involves strangers luring vulnerable people through the internet or abducting them is a myth the troopers dispelled. Instead, family members or trusted individuals can groom people for trafficking.

“Percentages show that close to 50 percent are put into trafficking by someone they know. It’s easier for them to groom and keep in the lifestyle that way versus someone who is forcibly taken,” Krull said.

Many stay because of fear, blackmail or coercion.

“The number one myth is that we live in a slave-free world. In fact there are more slaves now than there ever has been,” he said.

For more information about human trafficking in Iowa, visit humantraffickinghotline.org/state/iowa.