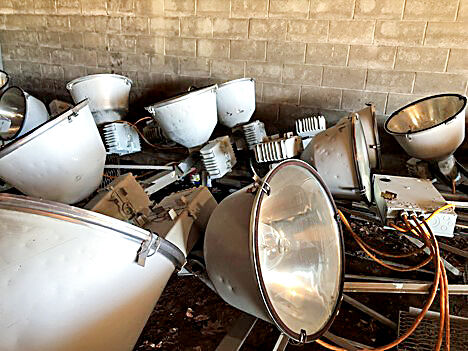 Lights sit tight in storage at George-Little Rock High School, destined for the softball field in George. The district is sprucing up the diamond as the Mustangs will no longer share a softball program with Central Lyon High School. 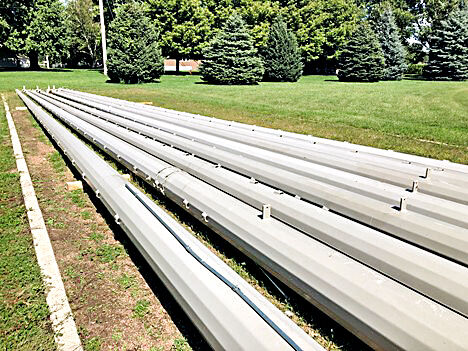 The poles that will hoist the new lights at the George-Little Rock High School softball field await installation in George.

GEORGE—A new dawn is breaking for the George-Little Rock High School softball program, and it soon will not be a problem if the sun sets.

Decades after other athletic fields in the area installed lights, the girls’ diamond in George will finally be available after the sky goes dim.

Principal Tyler Glanzer, also the Mustangs’ baseball coach, said it has been a long time coming.

“It’s pretty typical. Most people have lights on the softball field,” he said. “It’s something we have been wanting to do a long time and we’re going to have it done. It’s going to be something nice, and we’re doing quite a bit of work to our baseball and softball fields to keep updating them.”

The lights and poles recently arrived and are awaiting installation in storage. Since the season does not start until May, the athletic department has plenty of time to get the new gear to rise and shine.

Other updates on the to-do list include replacing the backstop behind home plate, planting grass along base paths, and adding irrigation systems.

“Most likely, what will happen with most of those projects, like any other school has to do, is they get prioritized and systemically decide how to do them over time,” Glanzer said. “We probably aren’t going to be able to do every single one of them all at one time.”

The bells and whistles come as George-Little Rock sets off on its own after sharing a softball team with Central Lyon High School in Rock Rapids. The George-Little Rock School District Board of Education voted 3-1 in May to split from the neighboring district, which has combined for softball since 1991. According to the meeting minutes, board members expressed concern that the decision “will like continue to create tensions between the districts.” However, for the time being, the schools will maintain their program sharing agreement for football, cross country and wrestling.

With the home field advantage all in George, Glanzer said it was the right time to buttress the softball park.

“For years, we’ve started games a half-hour earlier to make sure we’re done before darkness sets in,” he said.

Mustang softball games also have been called early because of darkness in previous seasons. The low visibility not only makes the game difficult to play, but also can lead to player safety concerns.

Injury precaution also is the reason George-Little Rock wants better playing surface as unkempt fields can be a tripping hazard. Watering fields is so critical that some N’West Iowa cities provide schools exceptions to irrigation restrictions during droughts because dry fields can harm the young athletes.

The artificial fixtures will remedy the late-game vision issues, but Glanzer said they will add more than convenience and physical well-being.

“For kids, there is something to being able to play under the lights,” the principal said. “That a piece of it, and any time something is new — it may not be new for somebody else, but it’s new to us — that’s fun to have.”

While not critical for the student-athletes, his position is it is important to have a campus that makes everyone proud.

“Parents maybe notice that stuff more than kids do, and it’s accurate that most kids — they just want to play, and they don’t necessarily care too much what the backstop looks like on the baseball field,” Glanzer said. “But I still think it’s something that we want to continue to look at and keep updating. Kids deserve to have the best facilities to play or perform in any activity.”

At the end of the day, regardless of the activity, Glanzer maintained that providing the highest quality possible is his top priority as an educator.

“Any educator, and for sure here at George-Little Rock, we make decisions based on kids,” he said. “That’s what we want to keep doing.”

GEORGE—The classroom isn’t always set up to learn life skills, but the George-Little Rock School District is working to change that.