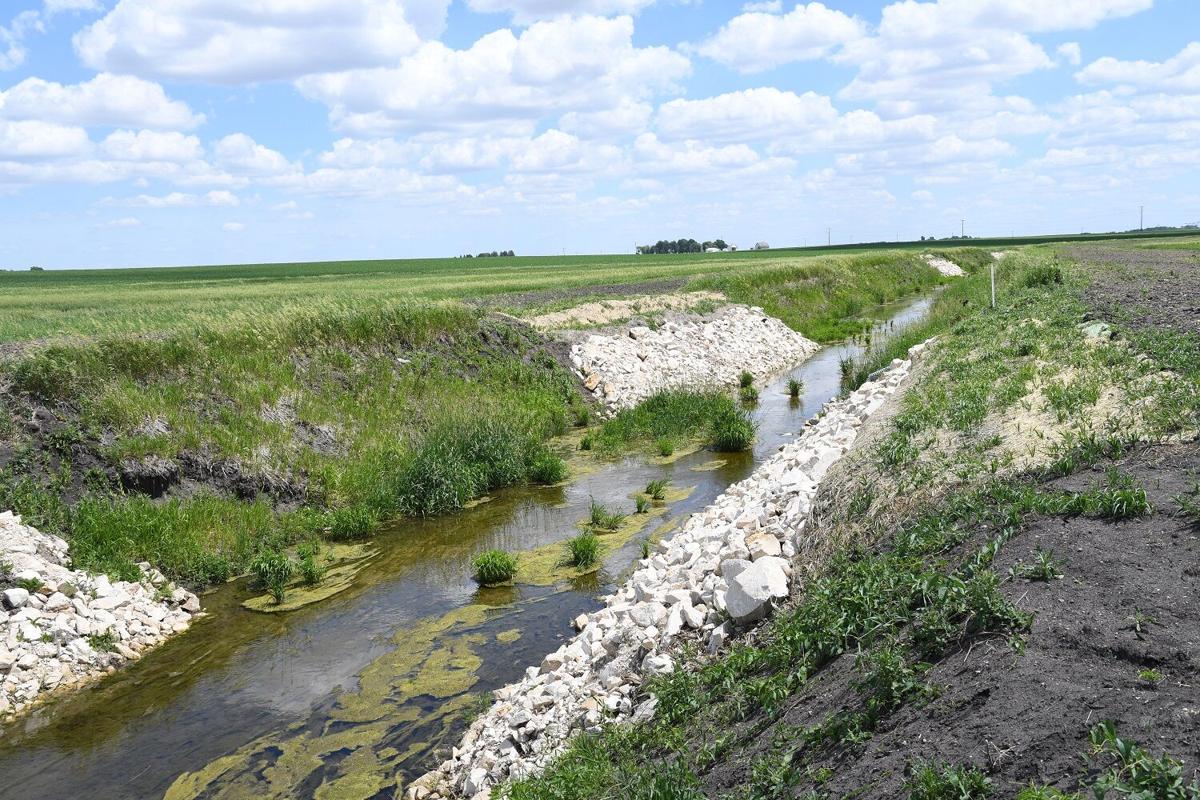 Repair work on a ditch in O’Brien County’s Drainage District No. 5 northwest of Hartley was completed in late May, 189 days after the contracted completion date. However, some landowners in the district told the county Tuesday, July 13, about tile outlet work that still needs to be done. 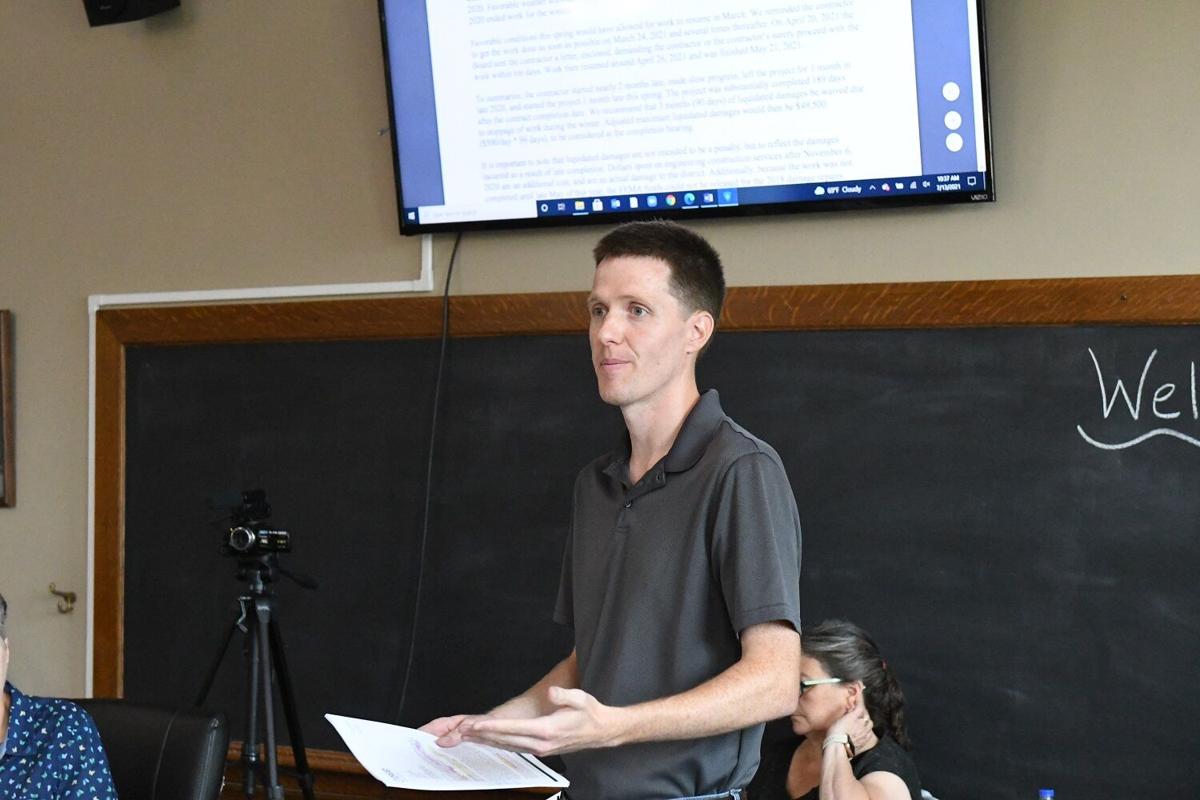 Collin Klingbeil, an engineer for Bolton & Menk of Spencer, delivers a report regarding repair work for Drainage District No. 5 near Hartley. The project was completed in May, 189 days past the contracted deadline.

PRIMGHAR—Repair work on O’Brien County’s Drainage District No. 5 officially concluded in May, although lingering issues remain for some landowners who own property in the district.

The county supervisors held a two-hour hearing on the matter Tuesday, July 13, during which they received a report from Collin Klingbeil, the engineer in charge of the project out of Bolton & Menk’s Spencer office.

Klingbeil summarized the ordeal, which stems from damage the drainage district sustained during the floods of 2018 and 2019.

King Excavation of Cylinder was hired for the repair work last March with the low bid of $592,908.75, although the final contract amount came in at $563,210.85 due to adjustments with the erosion control blanket needed.

The Federal Emergency Management Agency will fund about 75 percent of the project’s overall cost while the drainage district will be on the hook for 15 percent and the state of Iowa will cover 10 percent.

Klingbeil recounted numerous instances of delays and slow work progress on King Excavation’s part. By the completion date of Nov. 6, the riprap work was completed, although only about half the erosion control blanket and seeding had been finished and pipe work still remained.

About that time, Klingbeil said King Excavation pulled off from the project for about a month, not resuming work until around Dec. 10. Favorable weather would have allowed spring work to start in March following a winter hiatus, although Klingbeil’s report noted it did not proceed until late April and concluded May 21.

“All told, that’s 189 days late, and we’ve got eligible liquidated damages that were set in the contract at $500 a day,” Klingbeil said.

The sum of actual damages incurred — such as additional engineering services, interest incurred on FEMA-eligible dollars and interest on the amount the drainage district will owe — equaled $33,217.83. The drainage district holds a 10 percent retainage for the cost of the project, or $56,321.09.

Representatives from King Excavation did not attend the July 13 meeting, although Klingbeil read an e-mail he received from the company that explained its reasons for the delayed work.

The company referenced difficulties the coronavirus pandemic created for the economy in 2020 and thus impacted King Excavation’s ability to get materials delivered on time and keep its workforce on the job. The e-mail also noted the company’s difficulty working with the inspector hired for the project.

“We requested several times to have someone other than that inspector and were denied a reasonable inspector. We feel that we were not listened to and only the inspector was,” the e-mail said.

Klingbeil acknowledged there was difficulty with materials for the erosion control blanket, but pushed back on points presented in the e-mail. He said it was the first time the company had brought up problems related to the pandemic. He also said King Excavation had left the drainage project for a month after Nov. 6 to work on a different project.

He also had not heard issues about the inspector from King Excavation until Nov. 9 and said the inspector was ensuring the construction company was doing what it was supposed to do.

Klingbeil spoke with a few of the landowners who submitted claims for damages incurred on their property as a result of the drainage repairs. His report detailed crop damage that 11 property owners experienced across about 20 parcels of land.

A well lid owned by Larry Hennings also was broken inadvertently during the drainage repair work and will be recompensed with $150 from the contractor’s retainage.

Randy Menke is one of the farmers in the drainage district who attended the meeting. Besides having reported more than $1,000 in crop damage, Menke told Klingbeil he was concerned about a drainage tube in one parcel that had stuck out into the ditch but was torn off due to flooding.

Menke tried to locate the opening but was unable to do so. Then when the riprap work was being done, Menke said the contractor covered up the tile opening.

“If we’ve had wetter weather, obviously, it would probably show up. But that’s my bigger concern, that that’s been covered up and it doesn’t work,” Menke said.

Klingbeil said he was aware there were some tile outlets that were impacted in the drainage ditch and that known ones were documented as part of the process for the project to become FEMA eligible. However, he acknowledged some were possibly missed and that he was aware of the one Menke mentioned.

Klingbeil said there is a one-year warranty period following the repair work’s completion, during which time Menke could file a claim to have the tile outlet properly fixed.

Another landowner in the drainage district, Roger Westphal, said he also has three covered tile outlets and asked who would be responsible for the cost if they are not located within the warranty period.

Klingbeil said it would be better to use the warranty claim sooner than later. He also said if Westphal and Menke could find the approximate locations ahead of time, that would help with the process.

Westphal said he would prefer to hire his own contractor for the job, since he was displeased with King Excavation. Menke agreed with Westphal.

Klingbeil said they would be able to do that, however, if they did not give King Excavation the right of first refusal for the work, the farmers would not be eligible for the warranty claim.

“If they don’t want to come back, and then you have that contract and say, ‘Well, we want to bring this person in for this dollar amount,’ and they say, ‘Fine. That’s coming out of our retainage,’” Klingbeil said.

Menke said he would not want anyone coming in to fix the tile outlets until September or October so they would not ruin crops any further.

It was decided the county and Klingbeil would negotiate an agreement with King Excavation regarding the retainage so that a portion of that money could go toward remaining repair work that needed to be done.

PRIMGHAR—O’Brien County is nearing the end of a five-year saga to complete a ditch cleanup in Drainage District No. 5 northwest of Hartley.