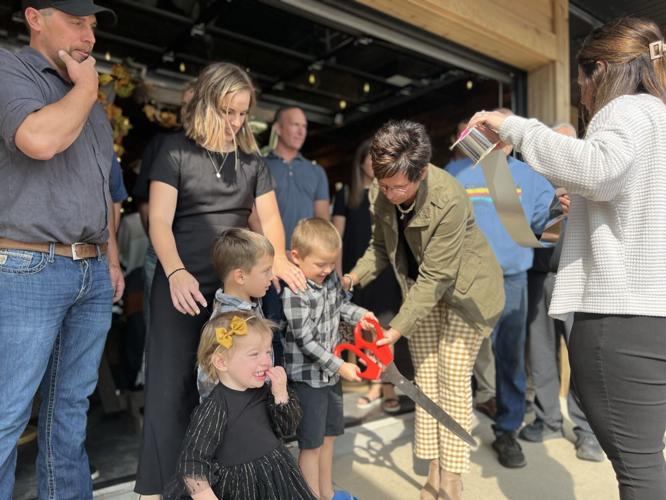 Five-year-old Jackson Westra prepares to cut the ribbon during the grand opening of the new downtown location of Copper Rose Apparel in Rock Valley. Standing behind him are store owners Britney Westra, his mother, and Joane Rozeboom, his grandmother. 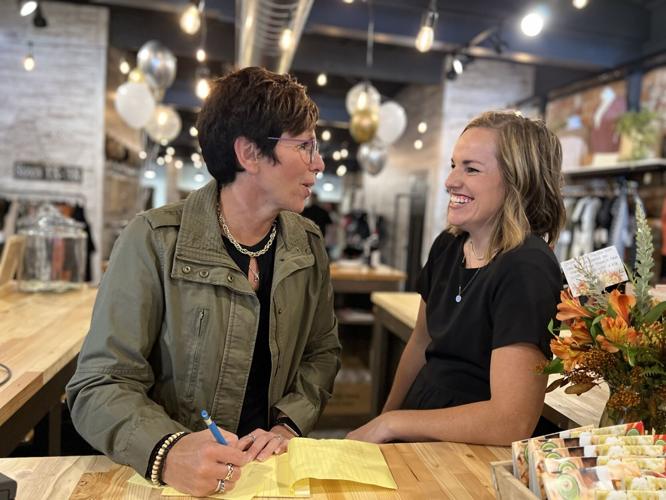 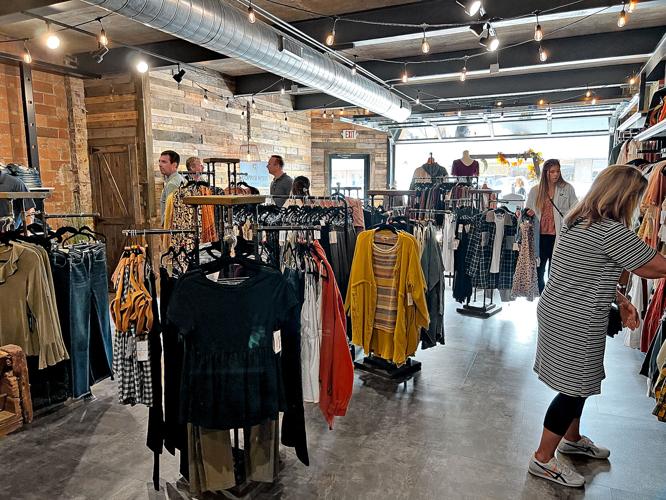 Shoppers browse the racks in Copper Rose Apparel located in Rock Valley during its grand opening event in September. The store was previously located in a strip mall near Highway 18. 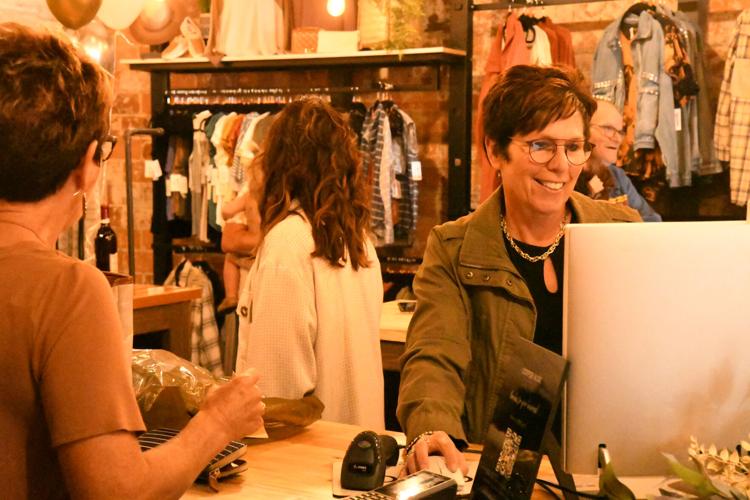 Joane Rozeboom runs the till at the business she owns with her daughter, Copper Rose Apparel, on the day of its grand opening at its new downtown location. 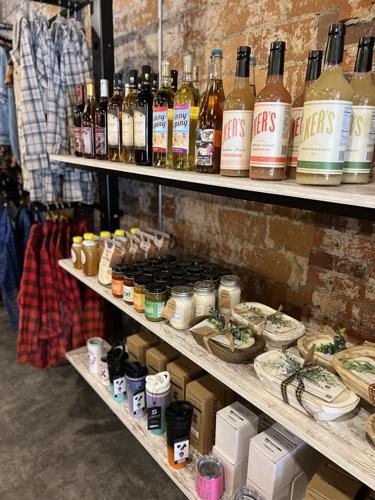 Along with apparel, Copper Rose Apparel in downtown Rock Valley has a number of specialty items available, many of which are locally sourced.

ROCK VALLEY—Copper Rose Apparel, the downtown Rock Valley clothing and gift boutique, is the result of a late-night text.

“I was like, ‘I love this boutique and all these cute clothes — why wouldn’t I just do it for myself?” Westra said.

She decided to run it by her mother, and eventual business partner, Joane Rozeboom.

“It was absolutely crazy,” the 54-year-old Rozeboom said.

It was crazy, but Rozeboom was in. The mother-daughter duo started by creating an online clothing shop, then opened a brick-and-mortar store in Westview Plaza, the strip mall adjacent to Highway 18 in Rock Valley.

It was not the first crazy idea the two pursued together. Before launching Copper Rose Apparel, Westra and her parents began selling furniture built by Westra — and goods bought at auction by her father, Jay — in the Rozebooms’ old barn.

“I had been doing craft shows, and I was looking for something a little more permanent,” Westra said. “So, we worked together to clean up the barn on their yard and opened it for monthly shopping. We had our first pop-up boutique in the barn but quickly decided that is not a place for new clothes.”

Once Rozeboom and Westra had secured a permanent location in the strip mall, they renovated the space and opened the first Copper Rose Apparel in August of 2021. The store’s name is a nod to the family’s last name — the “rose” stands for “Rozeboom.” The “copper” was chosen because the two thought it paired well with “rose.”

Westra and Rozeboom spent their first year with a physical store building an inventory of clothing and other specialty gift items while continuing to sell goods online. They had no intentions of moving, but when a space opened up on Main Street in downtown Rock Valley, however, Westra and Rozeboom decided they better take a look.

“People come to Rock Valley just to check out all the little shops,” Rozeboom said.

Rather than empty storefronts, which are a familiar sight in many rural communities’ downtowns, Rock Valley’s downtown is a thriving retail center that draws shoppers from across the region — including from across state lines.

Rozeboom said she remembers seeing a sign in the Empire Mall in Sioux Falls, SD, advertising a bus trip to Rock Valley for a day of shopping.

“There are people lining up to get into a bus to take from Sioux Falls to Rock Valley,” Rozeboom said.

The two business owners were interested in the downtown location, which had been vacant for a couple of years. However, when they visited the space, which had most recently been a Chinese restaurant, they had misgivings.

“We went with our husbands to look at it,” Rozeboom said. “We walked in, looked at it, and all four of us were like, ‘Uh, no way.’”

The space still was cluttered with cooking equipment and needed a deep cleaning, along with significant renovation work. They did not jump on it, but they returned a couple more times.

“The third time, we were finally like, ‘All right. We’re going to take the plunge,’” Rozeboom said. “We bought the building at the end of April, and we started the renovation process in May.”

“We completely gutted everything, and we did most of the work with our husbands and by ourselves,” she added.

It was a whirlwind process that culminated in a mid-September grand opening and ribbon-cutting ceremony at the store’s new location.

The new store is organized to display a wide range of apparel, with smaller areas dedicated to a selection of fashion accessories, several spiritual devotionals and a variety of specialty goods produced by local and regional vendors.

“We are just starting with wine at this new location, and we’re trying to find unique wines from small-town wineries,” Rozeboom said, listing wines from Round Lake Vineyards and Winery in Minnesota among those sourced in the region.

“It’s something that you can’t go to the grocery store and get,” Westra said.

Along with wine, there are products sourced from a variety of local vendors, including handmade candles, honey, a variety of jarred salsas and “Cream of Anything” soup base, which Westra describes as “a healthier version of cream soup.”

The apparel for sale, which may be purchased in the store as well as online, is intended to appeal to women in a variety of age groups.

“We have teenagers that come in all the way up to people in their 90s,” Rozeboom said. “We’re covering a pretty wide range.”

The clothing appeals to a diverse clientele, but in general, it reflects the personal style and fashion sensibilities of its two owners.

“Britney’s style is more classic and comfortable because she has three little children,” Rozeboom said. “For me — if it’s different, I have to try it. My style is a little edgier, and we’ve kind of merged both our styles together.”

Westra describes her taste as “Midwest mama fashion,” and she looks for clothing that she can move and play in, striving for a balance of comfort, modesty and style.

While Rozeboom and Westra are united in their vision for the business, they play different roles.

She does all the “back-end” work, like ordering goods for the store, managing online sales and overseeing marketing and social media for the business.

Rozeboom takes care of much of the store’s “front end” — she works behind the cash register and floats around the store, greeting patrons and helping them find what they’re looking for.

“She’s way better at the people and relationships,” Westra said. “The store wouldn’t be where it is without her there.”

“And without you behind the scenes,” Rozeboom said. “We couldn’t do it without each other, but neither of us would want to do the other person’s side of it.”

Now that they have joined the downtown retail community, they are excited to see what the future brings.

“It’s been a crazy year in a half — from an online boutique to this crazy, beautiful store,” Westra said.

“We absolutely could not have done it without our families and friends, and the locals supporting us, stopping in to wish us well,” Rozeboom said. “It’s very overwhelming.”

REGIONAL—Three N’West Iowa communities will breathe new life into their downtowns after being named recipients of $300,000 Downtown Housing Grants.