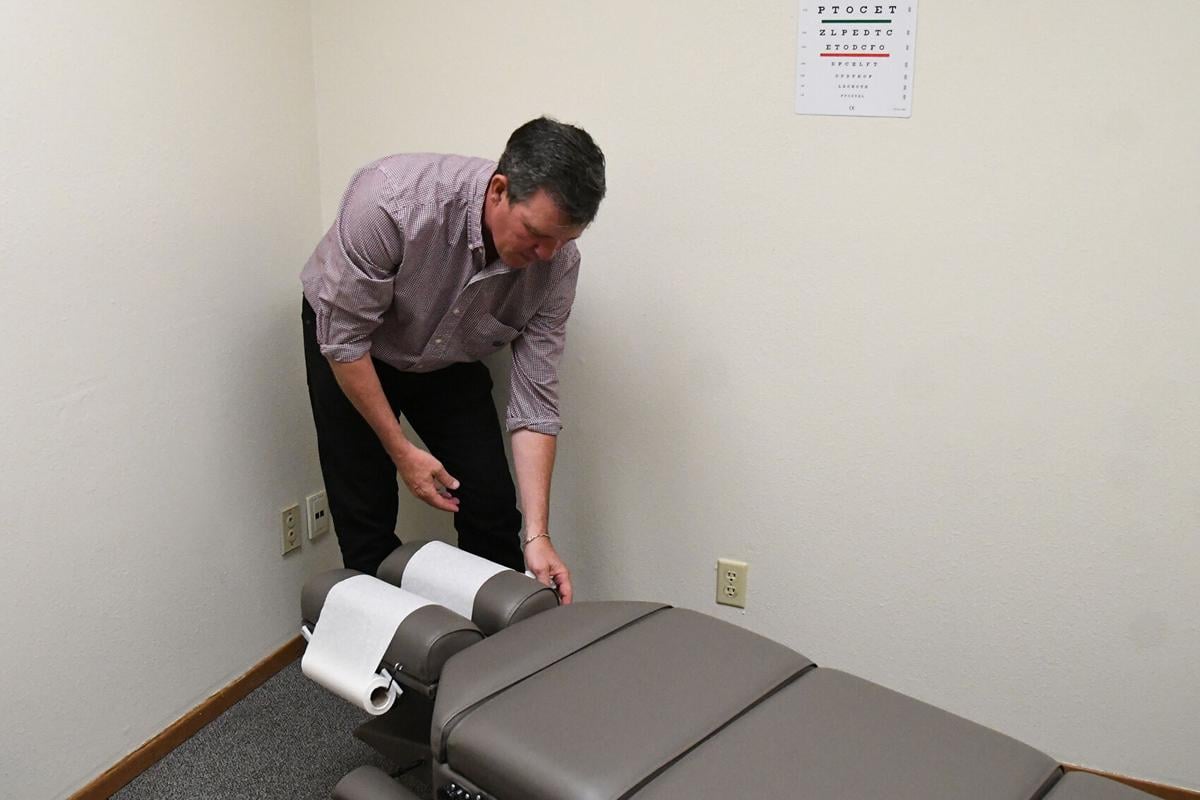 Tim Aberson of Paullina prepares an adjusting bench in his chiropractic clinic in Sutherland, which opened July 7. Aberson has about 25 years of experience in chiropractic care and saw a need for such a clinic in the southern O’Brien County community. 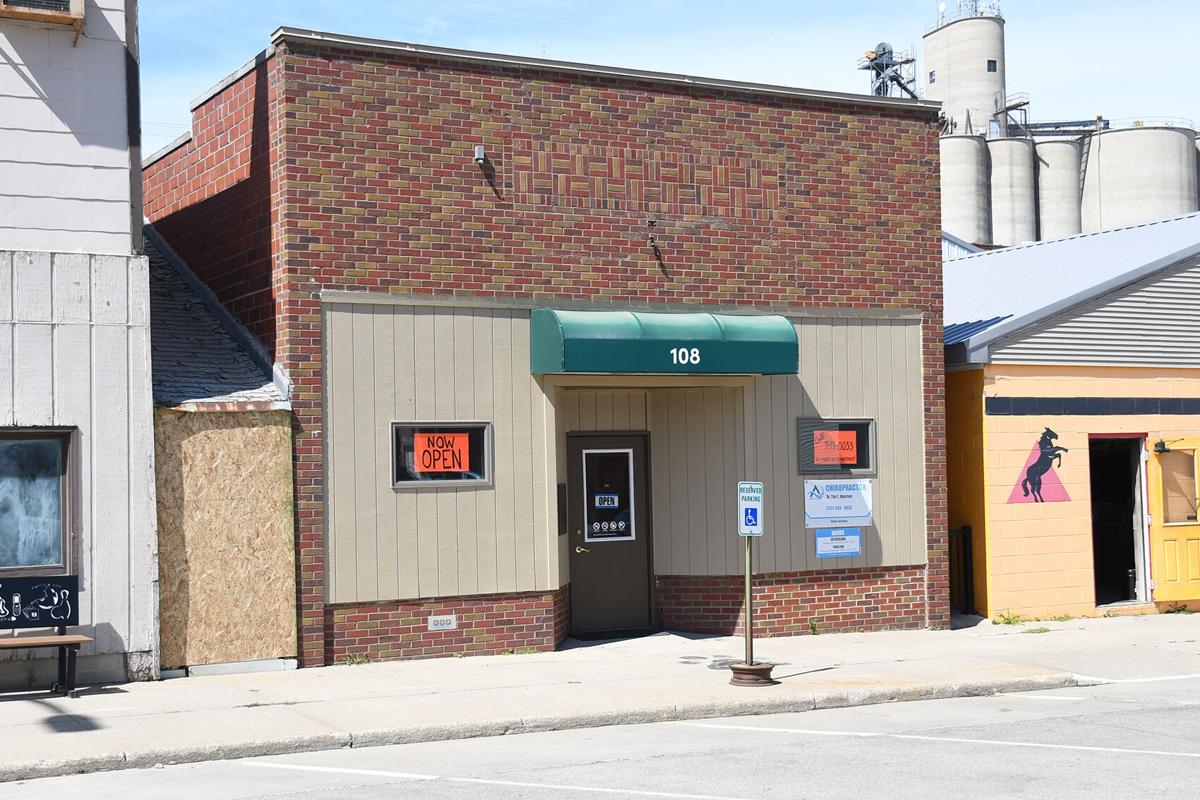 Aberson Consulting: Chiropractic Care opened a clinic in downtown Sutherland, located at 108 West Second St. The clinic is a satellite of Sibley Family & Sports Chiropractic & Acupuncture and offers a full range of care for patients of all ages. 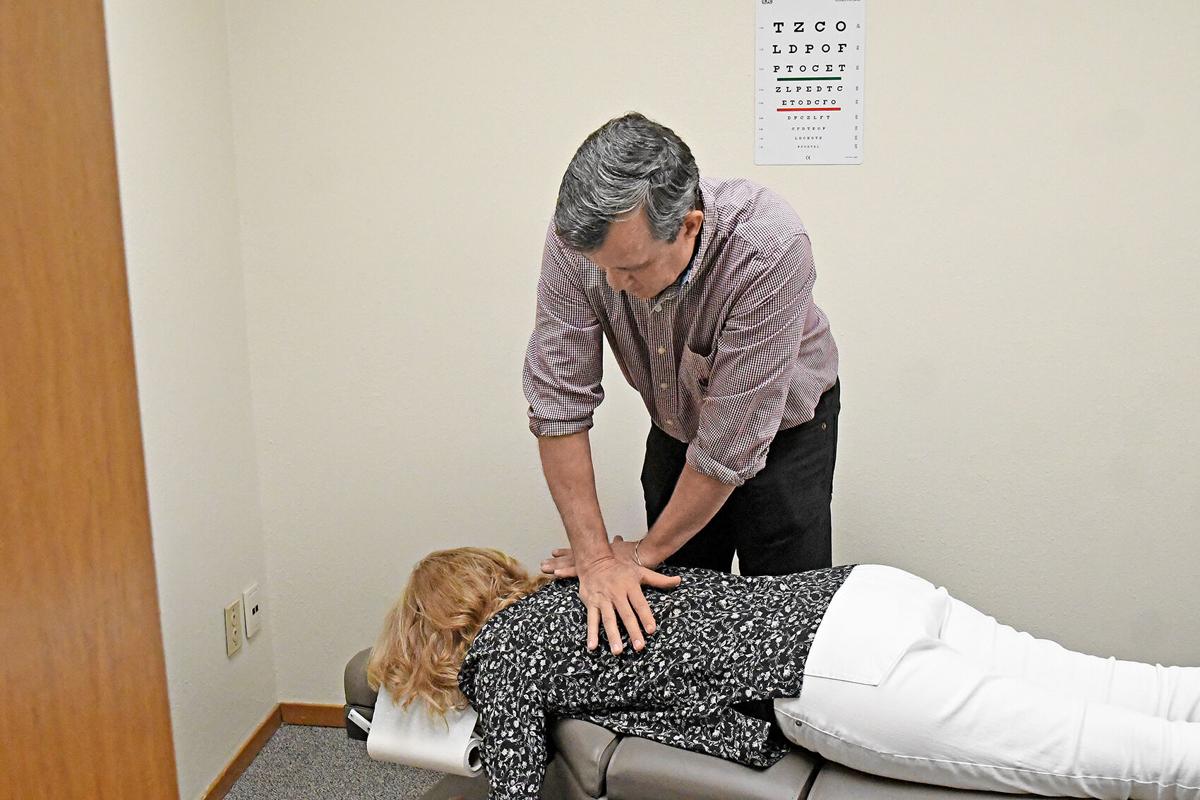 Tim Aberson of Paullina presses his palms down on his wife, Michelle’s, back during a chiropractic session at his clinic in Sutherland. The clinic, located at 108 West Second St., opened July 7.

SUTHERLAND—Tim Aberson literally has patients’ backs when it comes to fixing their pain.

“I just saw a need,” Aberson said. “They haven’t had a chiropractor for I think about two-and-a-half years, so we just saw a need and want to serve the community. This is more convenient so some people don’t have to drive.”

The clinic is the second Aberson opened this year through his business, Aberson Consulting: Chiropractic Care. The first, which launched in January, is located at 307 Center St. S. in Paullina.

Aberson has about 25 years of chiropractic experience. He graduated from Northwestern College in Orange City in 1989, where he majored in biology and minored in physical education. He then attended Palmer College of Chiropractic in Davenport.

He practiced as a chiropractor in Paullina until 2014 when he took a break from the profession to pursue various management ventures.

“I just had a lot of free time and had people requesting my services in chiropractic again,” Aberson said. “So I just started seeing patients again and one thing led to another and I kind of had a renewed passion for the profession and treating and helping people.”

He works at the Paullina clinic 8 a.m.-6 p.m. Monday, Wednesday and Friday and is in Sutherland those same hours Tuesday and Thursday.

The response since opening each clinic has been positive for Aberson, who said business has been steady.

“Since we launched, it’s just been growing exponentially,” he said.

Aberson sets up consultations with first-time patients to determine the best approach for treating their pain, taking into account factors such as medical history and their pain symptoms.

“Everybody’s different, everybody has different problems, but we help a whole host of problems,” he said.

Those include problems along patients’ spines as well as elbows, wrists, knees and feet.

Aberson’s clinics in Paullina and Sutherland are satellite locations of Sibley Family & Sports Chiropractic & Acupuncture and George Chiropractic, which are owned by Brian Sayler.

“When I decided to get back into it, I didn’t really want to do the billing and get new software and note taking,” Aberson said.

“So I approached him — and he already had a satellite clinic in George — so I said, ‘Can we just run this as a satellite clinic, do online billing through Sibley and tie in with your electronic note-taking system?’ and he said, ‘Absolutely.’”

Aberson resides in Paullina with his wife, Michelle. They have two children: Ben, who attends Northwestern College, and Kaitlyn, who is an English teacher in Des Moines.

This story was first printed in the July 18 issue of The South O'Brien Sun.

SUTHERLAND—Anna Friedrichsen is an award-winning artist.