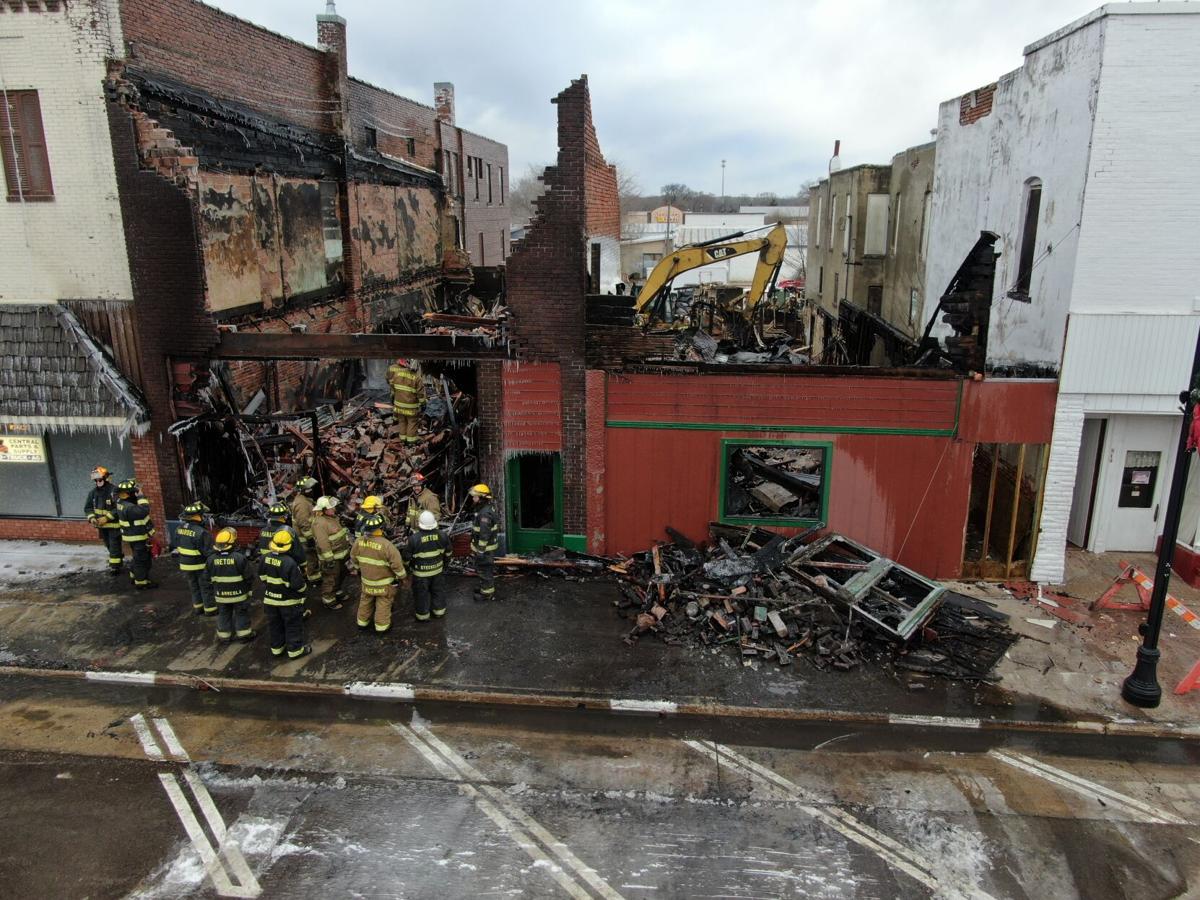 Central Cafe in Hawarden has been declared a total loss following a fire Sunday in Hawarden. Upon arrival to the scene, Hawarden Fire Department chief Duane Schiefen said the cafe was completely engulfed in flames. 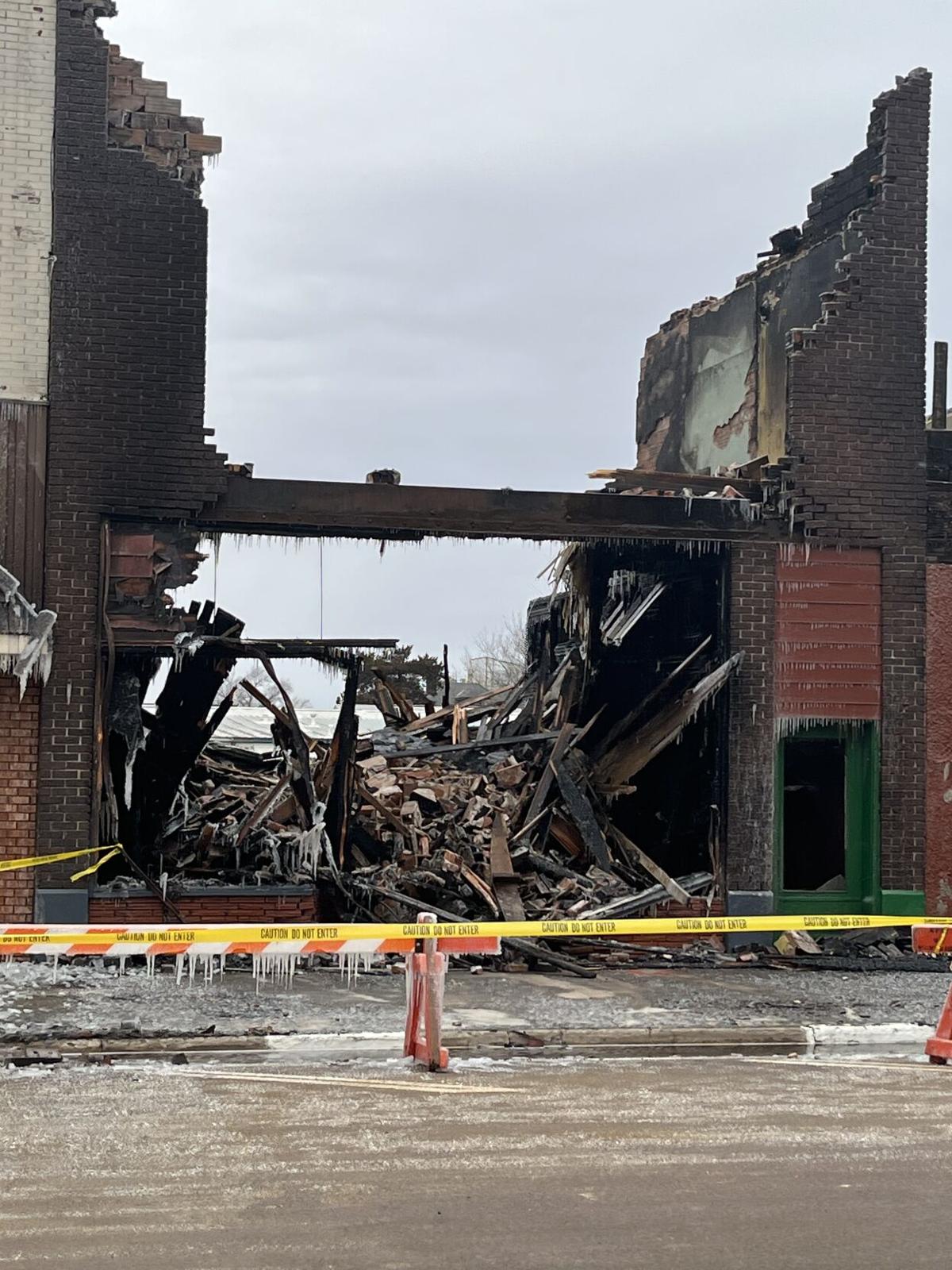 Central Cafe at 815 Central Ave. in Hawarden is a total loss after a fire engulfed the building early Sunday morning. 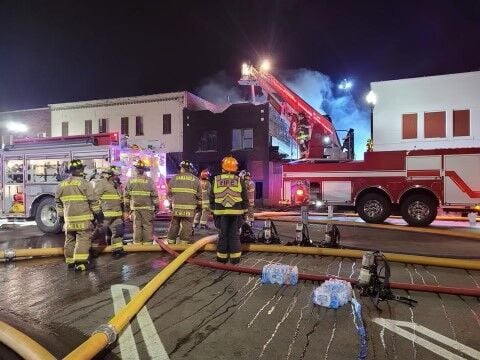 The Sioux Center Fire Department responded to a fire at Central Cafe at 815 Central Ave. in Hawarden early Sunday morning. The building was a total loss.

Central Cafe in Hawarden has been declared a total loss following a fire Sunday in Hawarden. Upon arrival to the scene, Hawarden Fire Department chief Duane Schiefen said the cafe was completely engulfed in flames.

Central Cafe at 815 Central Ave. in Hawarden is a total loss after a fire engulfed the building early Sunday morning.

The Sioux Center Fire Department responded to a fire at Central Cafe at 815 Central Ave. in Hawarden early Sunday morning. The building was a total loss.

HAWARDEN—A favorite downtown Hawarden cafe is a total loss after an early morning fire. At approximately 1:50 a.m., Sunday, Hawarden Fire and Rescue, the Hawarden Ambulance Association and Ireton Fire Department were called to 815 Central Ave. Upon arriving, Hawarden Fire & Rescue chief Duane Schiefen said Central Cafe was fully engulfed in flames and the cause of the fire is unknown.

Schiefen’s heart went out to the owners, Jen and Chad McVay of Canton, SD, and the community has already shown its support for the two.

“We don’t know what started it, we won’t know until probably Monday,” Schiefen said. “We just don’t know because there is so much damage. With the ceiling above, the second story coming in, it is tough to tell where it all started.”

There were no injuries reported. Central Parts & Supply, the business to the south of Central Cafe, suffered some water damage to the basement along with significant smoke damage.

Schiefen also reported knowing that about five other Central Ave. businesses have smoke damage as well. In-Weave is the business located right to the north of Central Cafe.

“We are fortunate,” Schiefen said. “So fortunate to have a lumber yard right in town, Schoeneman’s Lumber supplied us with some plywood and materials to board up Central Parts.”

The McVays woke up to the sound of the Canton Police Department knocking on their door. Chad recalls the officer asking him to confirm his identity and then delivered the news of the fire at their cafe in Hawarden. He immediately woke up his wife. Jen opened Central Cafe in the summer of 2019.

“She just has put so much into the cafe,” Chad said. “It kills me that all her work, her dedication is gone because of the fire.”

“Orange City’s aerial was in the back and the aerial of Sioux Center’s was in the front,” Schiefen said. “We had a lot of tankers here to supply a lot of water. We were running off four hydrants at the peak of the fire. The city crew arrived really quickly, we got the whole west side of the electric and gas shutdown and then it was all up and running again in a matter of two hours.”

Hawarden mayor Ric Porter echoed what Schiefen said about the community support shown during the early morning fire. He also credited the emergency service personnel, the city staff, those fellow business owners and community members who showed up in support of Central Cafe.

“We have this small town, you call your neighbors, they show up and they do what they need to do,” Porter said. “We thank them, the community will rally to help those at Central Cafe like Jen to get them back on their feet. I was in awe at the scene when I showed up this morning, it was just a sense of calm. And that is all due to the volunteers training and their passion for their personal self and this community. With Jen, and COVID-19 and all the changes she has made in the cafe, the hard work she has put in, even just in the last few weeks she always just remains so positive. We will move forward, just like we always do here in Hawarden.”

The cafe has been under the ownership of the McVays since May of 2019. Central Cafe is Jen’s passion and she in the sweat and tears to turn it into a place that is well respected and loved by everyone who orders a meal.

“I am still just in shock,” Jen said. “Everything I have worked so hard for, my daughter’s paintings, the new floors, everything, it’s all just gone. One thing I do know is that this can’t stop me. Rooster’s has offered us to maybe use their kitchen so we can be open for breakfast, there is so much to think about, but first we need to talk to the insurance company. But, if I had the opportunity, I would most certainly open tomorrow because this is what I love to do, it is my passion. Since I was a kid, I love to cook and to bake, it is who I am. ”

The McVay’s 11-year-old daughter, Nicole, promised her mom she would paint new artwork when they rebuild a new cafe. This was a good reminder for Jen that things are replaceable but it’s hard to not be shocked. Jen said she has been trying not to cry, but it has been hard.

“Nothing keeps her down, if she has a goal, she will reach it,” Chad said. “Especially when she is in the kitchen, I just let her go because nothing stops her.”

A GoFundMe has been started for the McVay family at https://www.gofundme.com/f/central-cafe-suffers-fire-morning-after-christmas?utm_source=customer&utm_medium=copy_link&utm_campaign=p_cp_guide_do&member=16267103.

The McVays are humbled by the support shown to them from everyone and remain thankful to the fire and EMS squads for all their hard work in keeping the fire from spreading throughout the downtown business district.

“We just want to thank all of them for helping us through the night,” Jen said. “We know it’s the morning after Christmas and they all should be still able to be home with their families, but they were fighting our fire. They were there for us, it means so much.”

The McVays was hoping to be able to spend Saturday and Sunday recovering from how busy the holiday season was. Instead they woke to the news of the fire.

Still, Jen said she will put her faith in God, just like former owners Deb and Bill DeJong have done in through the many years at Central Cafe. Bill’s parents, Dave and Mina DeJong, opened the cafe in 1976. For 45 years, it’s been tradition to have someone with the DeJong name working in the cafe. Deb has been the businesses favorite waitress for many of those years.

A GoFundMe has been started for the McVay family at https://www.gofundme.com/f/central-cafe-suffers-fire-morning-after-christmas?utm_source=customer&utm_medium=copy_link&utm_campaign=p_cp_guide_do&member=16267103

HAWARDEN—Central Cafe downtown Hawarden has been under new ownership for a little more than a month.