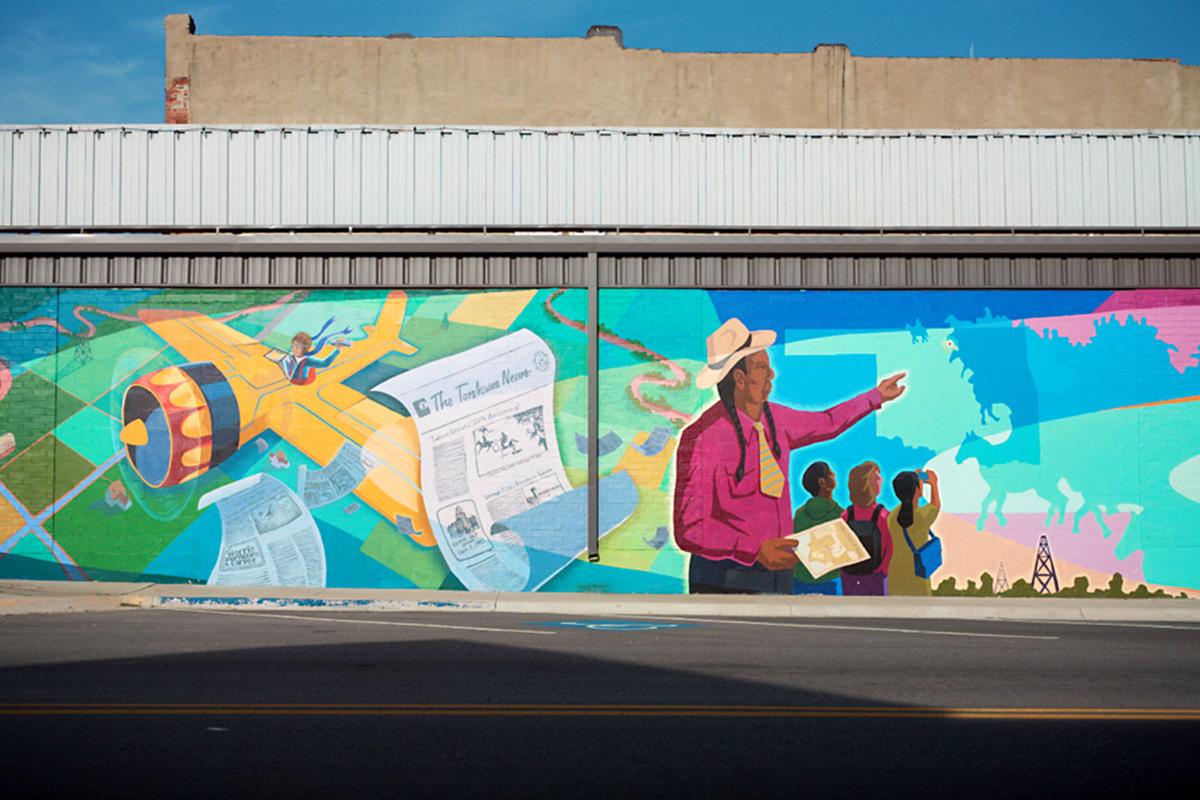 Nicholas Ward and Amber Hansen, an Alton native, were mural assistants on the Mid-America Mural Project in Tonkawa, OK, in 2010. The mural is called “Listening Back, Dreaming Forward: The Rhythms of Tonkawa.” Photo submitted 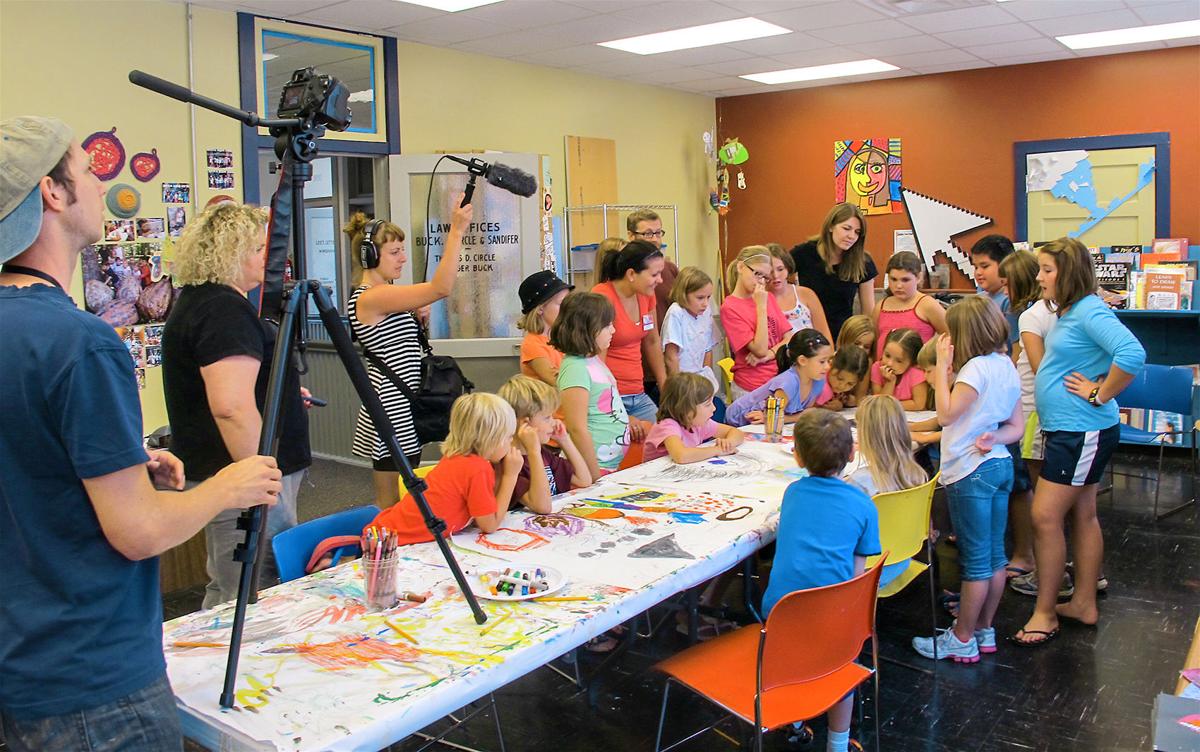 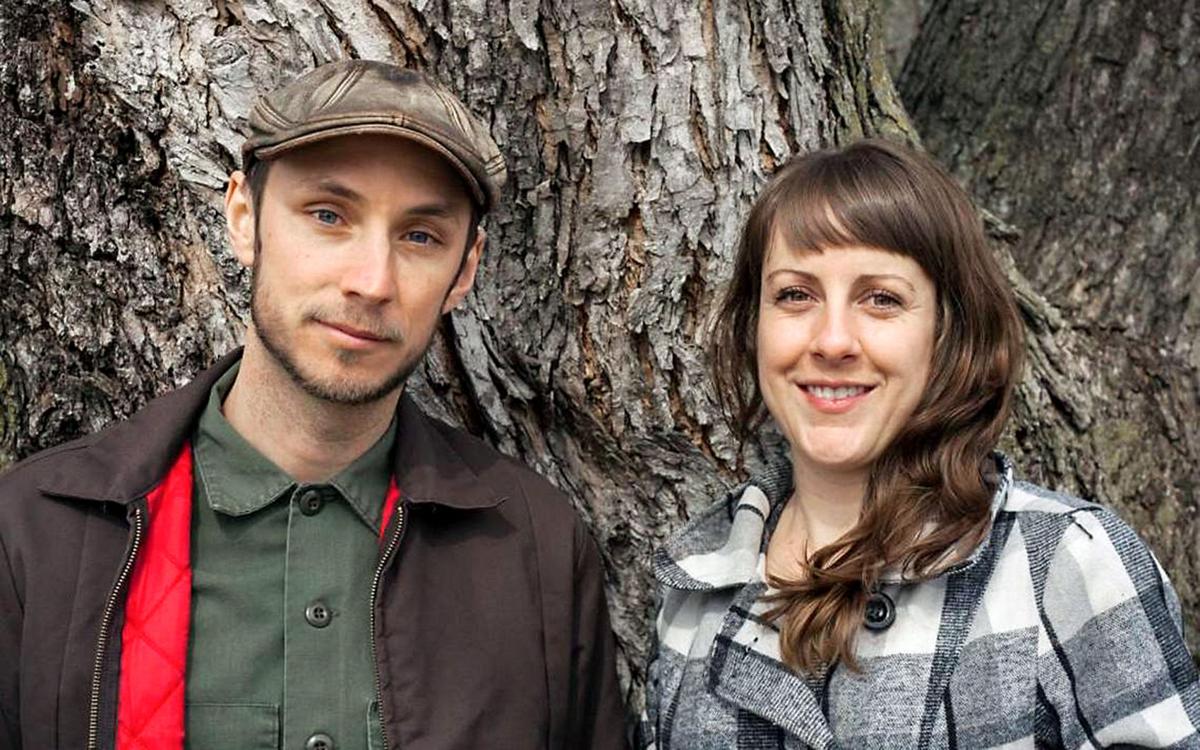 Nicholas Ward and Amber Hansen, an Alton native, were mural assistants on the Mid-America Mural Project in Tonkawa, OK, in 2010. The mural is called “Listening Back, Dreaming Forward: The Rhythms of Tonkawa.” Photo submitted

REGIONAL—Amber Hansen enjoys painting a picture and telling people about it.

The 33-year-old Alton native has co-directed a documentary film titled, “Called to Walls,” which celebrates the potential of community-based art in Middle America through the works of prize-winning muralist David “Dave” Loewenstein of Lawrence, KS.

A special screening of the feature-length film will be held at 7 p.m. Thursday, Nov. 30, at Wonderland Theater, 110 S. Main St., in Paullina.

The film — which Hansen co-directed with Nicholas Ward, a Sioux Falls, SD, native — has been described as part road movie and part inspirational art documentary. It made its public debut in 2016.

“Through the creation of the film, we’re hoping to share methods of how to create community-based artwork, but also amplify this particular art form,” Hansen said.

The documentary is set in Tonkawa, OK; Newton, KS; Joplin, MO; and Arkadelphia, AR, where from 2010-13, Loewenstein and his team worked with communities to create large-scale, collaborative community-based murals through the Mid-America Mural Project.

In 2010, Loewenstein asked Hansen and Ward — who had just earned master’s degrees in painting from the University of Kansas in Lawrence — to serve as mural assistants on the project, which was supported by the Mid-America Arts Alliance.

The Kansas City, MO-based regional arts organization covers Arkansas, Kansas, Missouri, Nebraska, Oklahoma and Texas. Cities in those six states could submit applications to the alliance to have the mural project come to their communities.

“The original idea of the project was that any community — no matter how big or small — would be able to apply,” Hansen said.

“It wouldn’t matter how much money a city had be­­cause it would be funded through the alliance,” she said. “It just depended on who wanted it to come to town and the reasons why.”

In conjunction with the mural project, Hansen and Ward undertook the production of the documentary, which emphasizes the community-inclusive process used by Loewenstein.

“We documented our experience working as muralists,” Hansen said. “We just started posting short video clips online so people could follow our progress. We kept a blog and uploaded our experiences.”

Those short video clips eventually turned into an 82-minute film.

“We were compelled to make a documentary about it because the process of creating a community-based mural and the history of it had largely been excluded from our academic training, which we thought was noticeable,” Hansen said. “Why was this process being left out of the training of being an artist?

“In addition, we want to share what this process looked like in rural communities and smaller urban areas and to highlight the culture, people and perspectives of those places,” she said.

When the mural project be­­gan in 2010, Hansen and Ward started documenting and recording its progress.

According to the alliance’s website, the mural project was launched in Tonkawa, an Oklahoma city of nearly 3,100, and Newton, a Kansas community of about 19,100.

Completed in 2010, the mural work provided residents direct hands-on experience in the research, design and execution of major public artworks for their communities.

Hansen and Ward served as mural assistants at the first project site in Tonkawa and then focused more on filming for their documentary as the overall mural project went along.

Joplin, a Missouri city of nearly 52,200, was the site of the mural project in the summer of 2011, not long after a terrible tornado had torn through the town.

In 2012, the mural project visited Arkadelphia, an Arkansas city of nearly 10,800 where Hansen and Ward finished filming for their documentary.

For each project, artists chosen to be mural assistants worked with Loewenstein from the earliest stages of the projects through to their completion, and are introduced to all of the skills used to shape successful community murals.

Loewenstein and his team lived for about three months at a time in each community that was receiving a mural.

“One month was spent re­­searching on location and meeting people within those communities,” Hansen said. “We also gave presentations in each community to let people know about the project and how they could be a part of it.

“We invited people to be on the design team,” she said, noting that 20-30 people usually were involved. “The goal was to create a diverse design team so people could represent different parts of the city and people were able to speak for themselves.”

The next month of work would include holding creative workshops with the design team and putting together the final design of a community’s mural.

The final month of activities would feature the painting of a city’s mural. Community members were invited to paint alongside Loewenstein and his team during the first week of mural work.

“It sparked ideas of possibilities that exist within rural communities to create public pieces of artwork together,” she said. “It also was an opportunity to share stories, reflect on histories that are represented in public places and bring people together.”

She emphasized the importance of the “Called to Walls” documentary.

“‘Called to Walls’ highlights and uplifts a type of work that has largely been left out of mainstream and academic art and is an approach to public art that may be lesser known in non-urban and rural areas,” Hansen said.

“The process that is demonstrated in each of the communities featured within the film can be used as a model for leading community-based projects that may extend into other forms and media,” she said. “It is an inclusive process meant to develop a portrait of the people, place and history of the communities and the individuals who participate.”

Hansen said the film was developed for artists, individuals and community organizers who live in smaller urban areas and rural communities.

“It was created for artists and for a general audience, and is meant to inspire community members to engage in conversations that will shape their visual environment and will reflect the histories, stories and values that are important to them,” Hansen said.

“The results are unique in each town the film visits, and every community has a rich and valuable story to share,” she said. “Murals can be a large, public, colorful, accessible and collaborative way to tell these stories.”

Hansen moved from Lawrence to Vermillion, SD, in August 2016 and is the assistant professor of painting in the art department at the University of South Dakota, which she graduated from in 2007 with a bachelor’s degree in painting.

She currently is introducing the community-based process into her painting curriculum and led students in creating collaborative and community-based murals in Vermillion and LeMars during this past spring.

Hansen, a 2003 graduate of Spalding Catholic High School in Granville, will be on hand for the N’West Iowa debut of her and Ward’s “Called to Walls” documentary Thursday, Nov. 30, at Wonderland Theater in Paullina.

“It’s very exciting to be sharing it with people in the area where I grew up,” Hansen said. “Hopefully, artistic mentors who have been a part of my life will be able to see it as well.”

Community-based public art is a familiar and well-documented field that seeks to develop meaningful and high-quality works through a collaborative process driven by local people, often with the guidance and technical assistance of professional artists.

Establishing a dialogue between her formal education and the ethics of her rural upbringing, Hansen’s work promotes the value of creative engagement for all ages while raising questions about the ethics of animal welfare and humans’ relationship with food.

Since 2010, Hansen has been the co-director and co-editor of the feature documentary “Called to Walls.”

Following the screening, guests are invited to stay for a panel discussion and a question-and-answer session with Hansen.