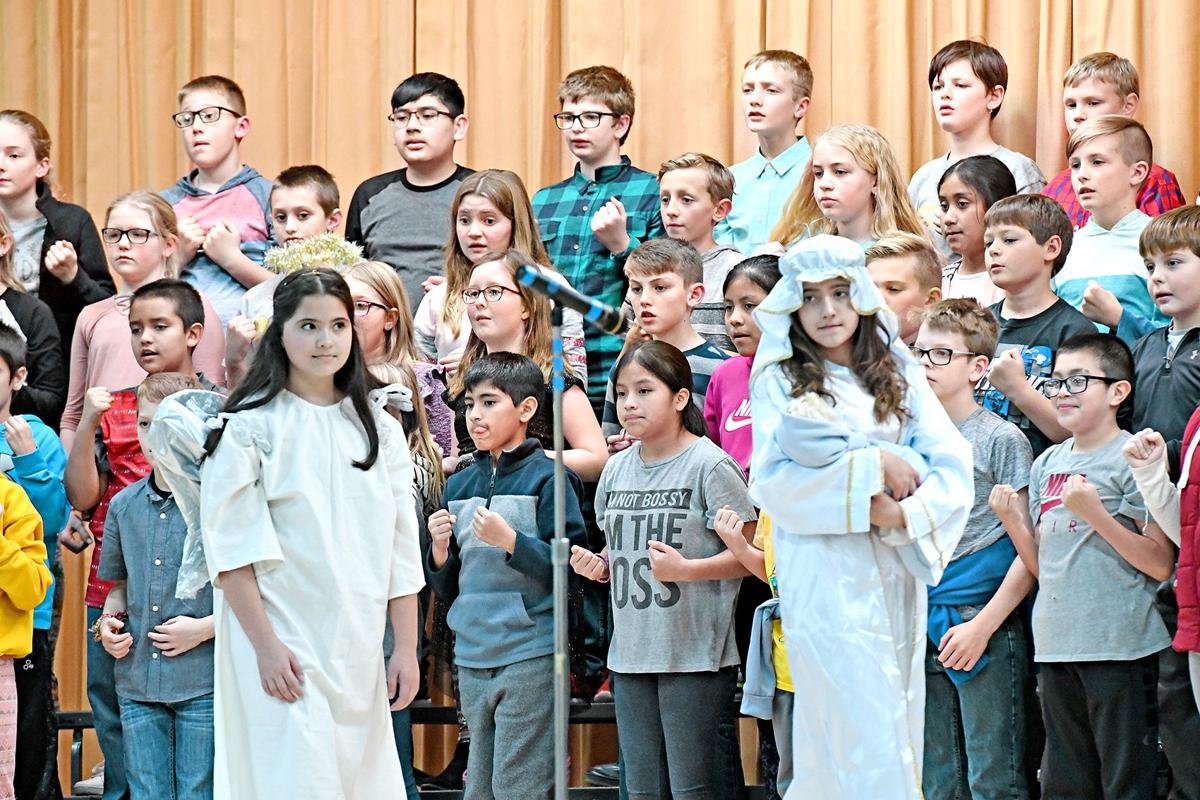 Sixth-graders Edith Hinojosa and Kiera Boogerd at Boyden-Hull Elementary portray an angel and Mary during one scene of “CAKE: Christmas Acts of Kindness.” 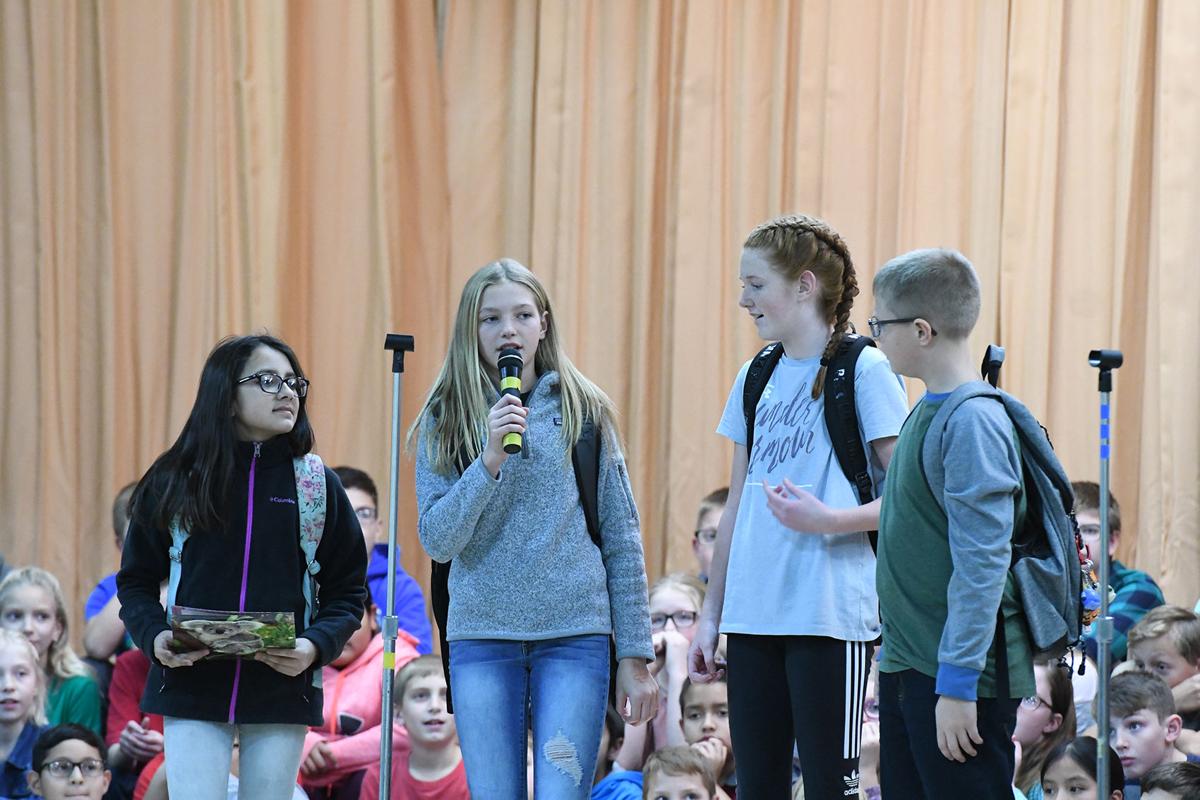 Sixth-graders Alexa Castelan, Jenna Vollink, Mya Kleinwolterink and Corey Kamies act out a scene of “CAKE: Christmas Acts of Kindness” for Boyden-Hull Elementary’s Christmas program. The show tells the story of students finding ways to demonstrate kindness to others during the holidays. 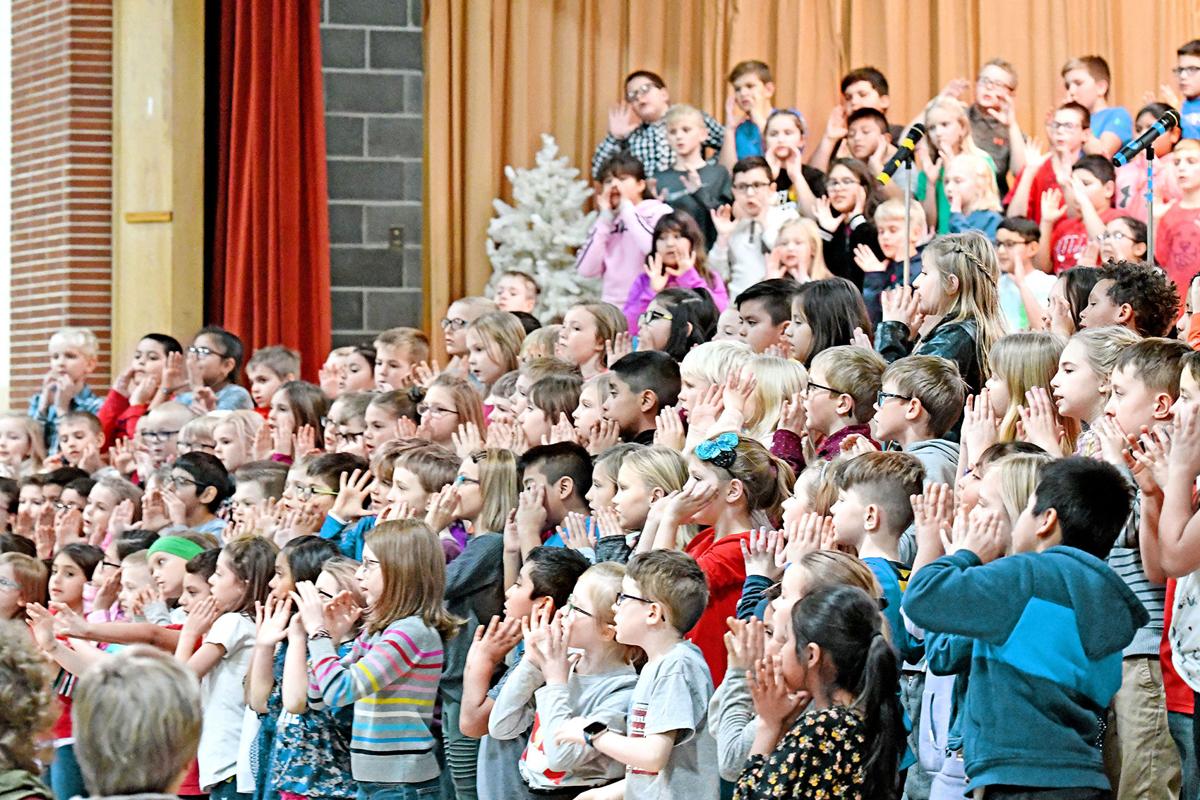 The chorus of students in grades 1-6 sing during Boyden-Hull Elementary’s annual Christmas program. In between songs, a group of sixth-grade students acted out scenes telling a story about acts of kindness people can do for Christmas.

BOYDEN—Students at Boyden-Hull Elementary recently showed how doing acts of kindness around the holidays can be a piece of cake.

About 250 students in grades K-6 took part in the school’s annual Christmas program on Thursday, Dec. 5, in the gym.

The show, directed by elementary music teacher Jill L. De Ruyter, was titled “CAKE: Christmas Acts of Kindness Experiment.” The 45-minute musical program followed characters as they demonstrated acts of kindness to others.

“It’s like a musical, so there is singing, whole-group singing and then there’s acting parts in between that tell the story,” De Ruyter said. “The songs kind of go along with the story as well.”

The program told the story of eight students who were assigned ways to perform acts of kindness to other people during their Christmas break. Some of the acts included donating clothes to a homeless shelter and getting gifts for people other than friends or family members.

“The message is just to look for ways that we can serve and show kindness to others,” De Ruyter said.

For instance, some of the sixth-graders acted as main characters, some sang solo or duet parts and others narrated the story or had backstage roles.

“That takes care of all my sixth-graders so that before they get done with elementary, they have some kind of part in the program,” De Ruyter said.

She said the afternoon performance is technically the students’ final dress rehearsal for the program that families are invited to attend.

“Years ago, when our evening crowd got very big, we were doing kind of a dress rehearsal on the afternoon of the program,” De Ruyter said. “We just started inviting people to come to that, and that has gotten bigger and bigger. So it’s kind of turned into an afternoon performance.”

She said having an afternoon performance also benefits people who want to see the show but do not want to venture out at night.

The Christmas program has been a longtime staple at Boyden-Hull Elementary.

“I’ve been here 25 years, and I know they were doing it long before that,” De Ruyter said.

The program changes every year, and each show tends to have a different theme. For example, last year’s program was “The Christmas Express: Finding Joy in the Journey,” which told the story of a teacher and her class riding aboard a train bound for a Christmas pageant to celebrate the birth of Jesus Christ. The year before, De Ruyter’s students performed “An Out of the Box Christmas,” a story where kids find unique ways to share the Christmas message with others.