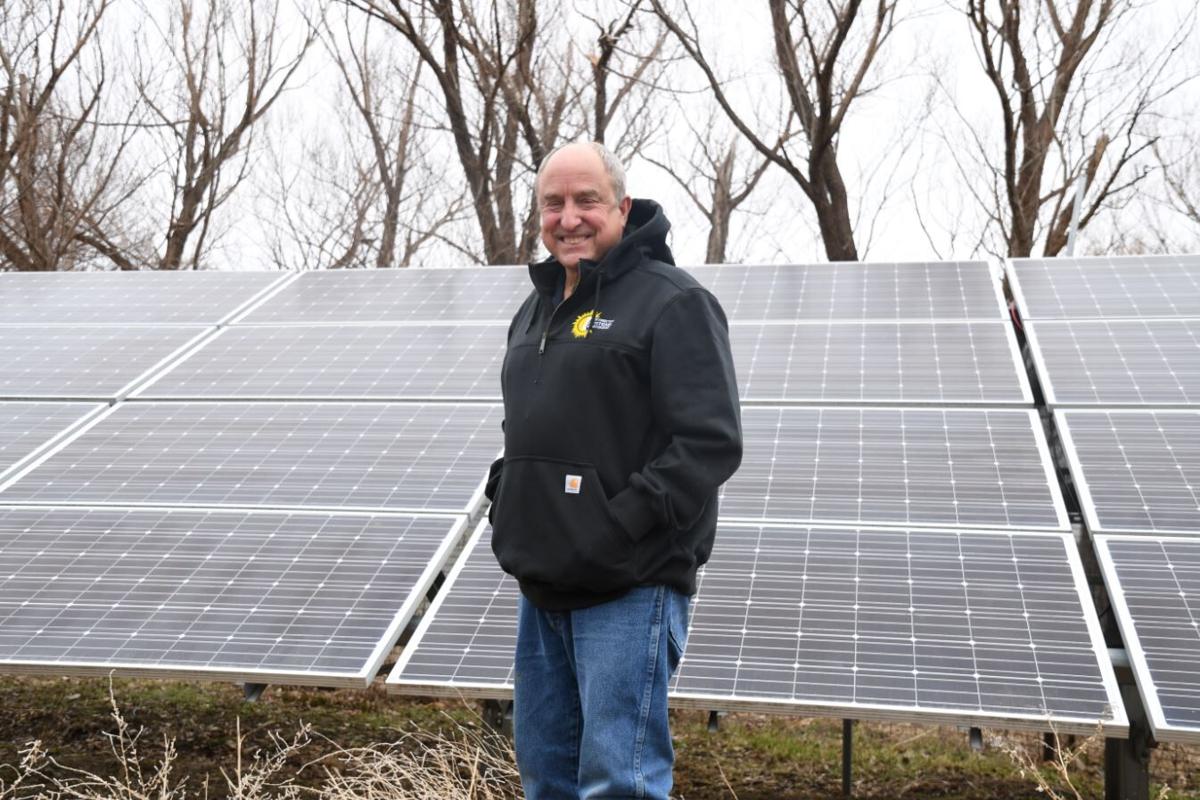 Ric Hansen of rural Alton has been interested in clean and renewable energy his whole life. He powers his house with solar energy and sells solar panels to small businesses and individuals in Iowa and Nebraska. 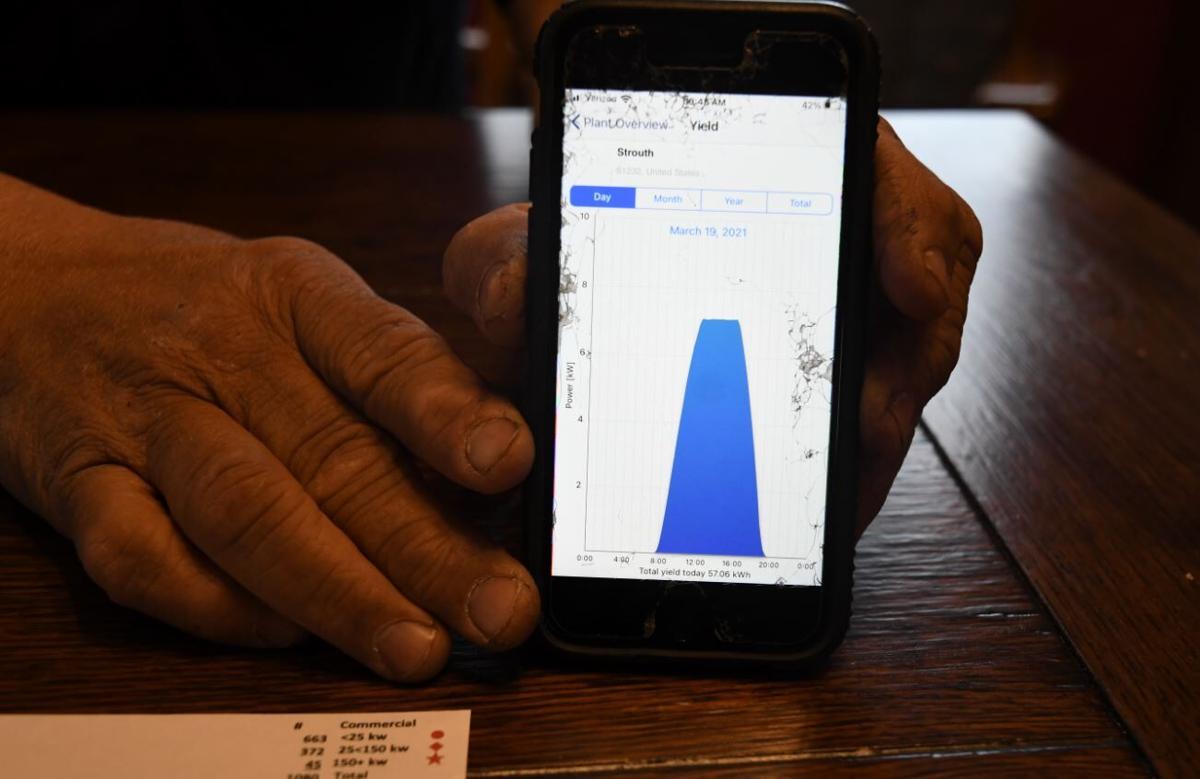 A good day of solar energy generation will produce a reading like this, with energy production starting when the sun comes up, plateauing in the middle of the day and slowly decreasing toward the evening. 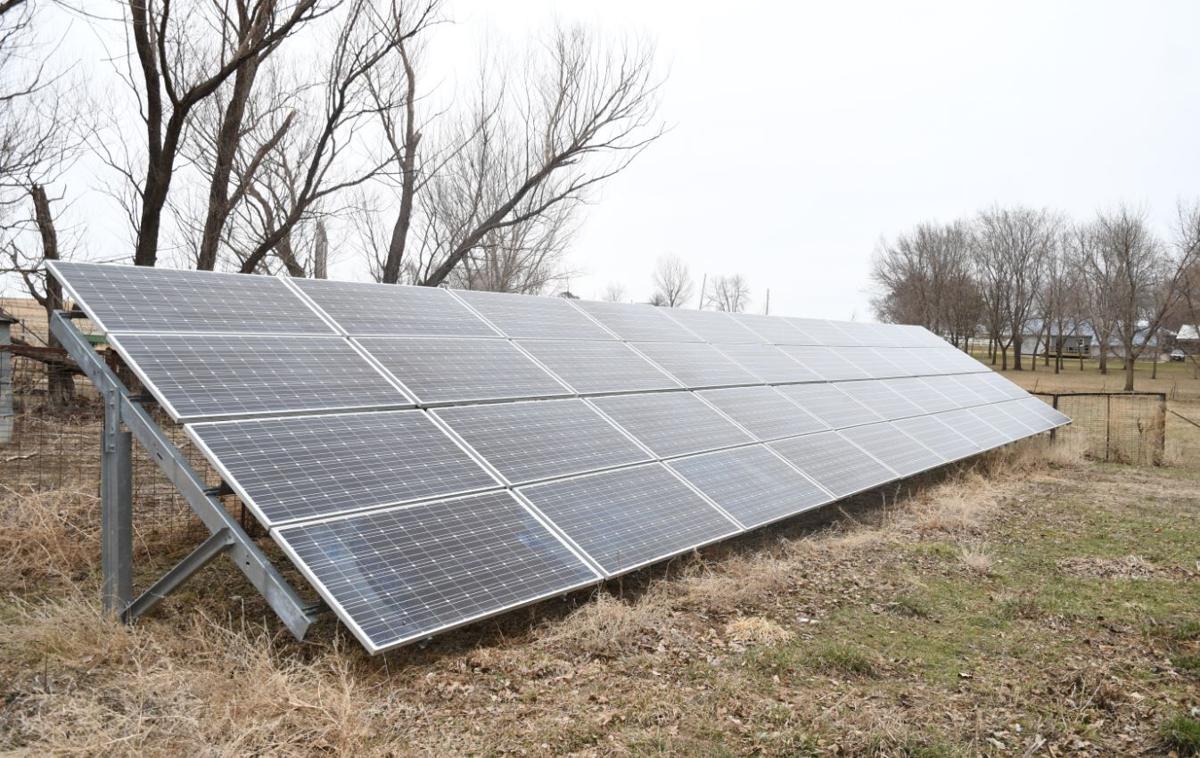 ALTON—It’s not always easy being green, but Ric Hansen is making a second career out of it.

Ric, who is 64 and lives with his wife, Janet, on a small farm north of Alton, has been installing solar panels for businesses and residential customers since 2016.

One of his first customers was himself. The Hansens’ home has been running partially on solar energy since 2017. They have 40 modules, or panels, installed in their backyard that generate 10 kilowatts per hour. It’s enough to power their home and some small outbuildings on their hobby farm.

“My system provides almost 90 percent of the energy I need every year,” Ric said.

He got his introduction to solar five years ago when longtime friend Wayne Williams hired him to do engineering, installation and quality control for his solar company in Central City, NE. The business, called Interconnection Systems Inc., does large solar installations in nine states.

Ric started his own business, Solar and Automation Controls Solutions, shortly afterward. Since 2018, he has been doing residential and small commercial installations, all 25 kilowatt-hours or less.

Most of his clients are in western Iowa and eastern Nebraska, but he continues to travel extensively while working for Interconnection Systems Inc.

Before he sold solar panels, Ric spent 28 years in robotics and system management at Wells Blue Bunny, but his interest in clean energy dates back much further.

In the 1970s, he was one of about 60,000 people who bought plans from Mother Earth News to convert a Ford Pinto into an electric car. Although he has yet to build the car, he’s held on to the plans just in case.

He and Janet try to be as self-sufficient as possible on their hobby farm near Alton.

They garden, keep bees and tap silver maples for syrup. Recently they have started growing lettuce using an automated aquaponics system their son Dakota bought them for Christmas.

“We’ve always loved renewable energy,” Janet said. “We thought about putting up a windmill just to be more self-sufficient with energy because we’re so self-sufficient in other ways.”

Ric got into solar because of his interest in clean energy, but for many of his customers it comes down to the dollar.

“A lot of people want to cut their electrical bill,” he said.

Solar installations can be used to charge batteries for full independence from the power grid, but many people, including the Hansens, do not use them. Instead, they draw on the power grid when solar energy is unavailable and earn credit from power companies by sharing excess power.

During the day, the solar panels generate energy that, if it’s not being used by the home, is dumped onto the power grid. Power companies in Iowa use net metering to track how much energy individual solar installations put into the grid.

Customers can build up credit from their power company so when they do have to draw on the grid — at night or on cloudy days — they aren’t charged for it.

The Hansens can’t make money for contributing more energy than they use, but they balance what they generate from solar with what they draw from the grid to nearly break even.

“We’re not totally self-sufficient, but we’re close,” Ric said. “Within eight or nine years it will pay for itself.”

The solar panels require minimal maintenance. After the initial setup, the system runs independently and can generally withstand wind and hail. Ric has helped install more than 200,000 panels in five years, and none have needed to be replaced because of hail damage.

“My system will outlive me,” he said. “It’s a pretty trouble-free set up, especially a stable one like mine.”

In a way, the longevity of each installation creates a unique problem for Ric. Although he’s sometimes called in for an electrical repair, he often doesn’t hear back from customers once the solar panels are up.

“Most of the customers we have, we never see them again,” he said.

However, he continues to monitor each system remotely, using software that allows him and the owner of the solar installation to track energy production. Unexpected dips, spikes or uneven production can tip him off to potential issues, such as a failing panel or energy converter.

“You can’t tell just by looking at them if something is wrong,” Ric said.

For all the advantages and cost savings solar offers, there are still some barriers. Solar can’t be installed just anywhere. Ideally panels would face south with minimal tree cover, which eliminates many urban locations because of physical limitations and lack of space.

“One reason you don’t see it as much here is the ground is so expensive,” Ric said.

A workaround Ric would like to see gain traction is community-based solar farms. Cities could set aside a piece of ground and let residents buy into panels there which would generate power for their residences. However, since cities can only buy power from one provider, some kind of agreement would need to be worked out with the power company before these solar farms could proceed.

He’s not sure how long he’ll continue to sell solar panels, but when he retires for good, he’s looking forward to finally working on that electric car “just to say I’ve done it.”

To learn more about solar energy or get a quote for a solar installation, visit richansenenterprise.com or call 712-540-6499.

Education: Associate in commercial and industrial electrical technology from Northwest Iowa Technical College in Sheldon in 1978

Background: Worked as electrician in Iowa and Kansas; robotics and system management at Wells Blue Bunny in LeMars, 1988-2016; electrical engineer at Interconnection Systems Inc. in Central City, NE, since 2016; owner of Solar and Automation Controls Solutions since 2018.

SIOUX CENTER—Sioux Center has a new barber in town.